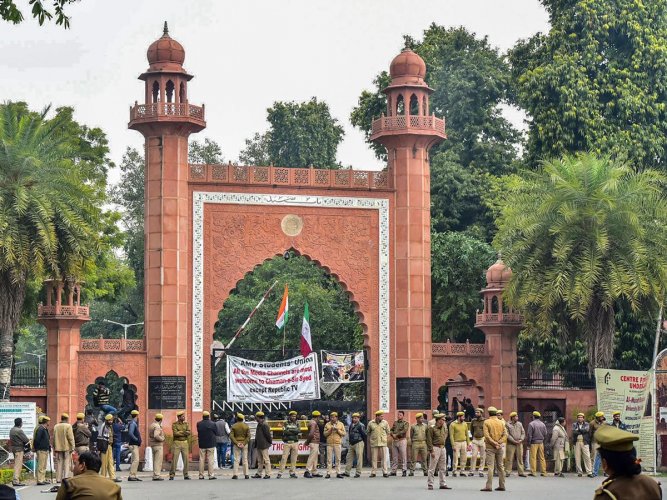 The students have been behind the bars since August 1, 2019.

According to The Hindu, the union members had allegedly created a ruckus in the vice chancellor’s office in his absence and tried to lock the registrar in there.

However, the students expressed concern for the student leaders in a memorandum submitted to the district magistrate.

“We are shocked to note that fake cases out of political vendetta have been filed against them,” the memorandum said.

The union’s president Salman Imtiaz demanded a reinvestigation of the report submitted by the Special Investigation Team constituted to probe the matter adding, “They are students and not criminals and should be dealt with accordingly. The charges are politically motivated.”

In a letter sent to Justice (retired) Markandey Katju – former judge at the supreme court – students and staff urged him to extend his support detailing the series of incidents that culminated in the imprisonment of the two union members.

According to the letter, on July 30, the union members had approached the administration to seek an explanation on the alleged “academic debarment” of nearly 50 students and deployment police on AMU campus.

Also read: AMU: Ahead of a Debate on Article 370, Security Beefed up on Campus

“…There was a wide spread talk among the university community that a police check post has been proposed to be established at the university circle which was a cause of concern for the students as direct involvement of police in University campus has never happened in the past due to the autonomous structure of the university,” said the letter.

However, the students say, the administration refused to meet the union members and the registrar allegedly threatened them of “dire consequences.” A day later, on July 31, the registrar filed an FIR against the members.

The administration, the letter says, issued “suspension orders” to the two union members and didn’t listen to their grievances prompting them to meet the vice chancellor once again. The VC also refused to meet them and, according to students, levelled false allegations against the them.

On August 1, while the president was released, the vice president and the secretary were sent to jail.

Furthermore, the administration allegedly filed “two fake FIRs” against university students and the union members, which were earlier filed by a few local BJP leaders, said the letter.

The students say that the administration, through such means, is trying to suppress the voice of dissent on campus.

“As the university administration wants to send across a message of authoritarianism and absolute power and wants to suppress any voice of reason and dissent and to achieve this reign of surveillance and suppression and threat has been unleashed over the students within the campus and any voiced raised is being curbed by hook or crook. This has resulted to an atmosphere of fear and mistrust in the university campus,” said the letter.

Moreover, the Akhil Bhartiya Vidyarthi Parishad has demanded that a sedition case be filed against Kashmiri students who held a protest on Thursday on campus.