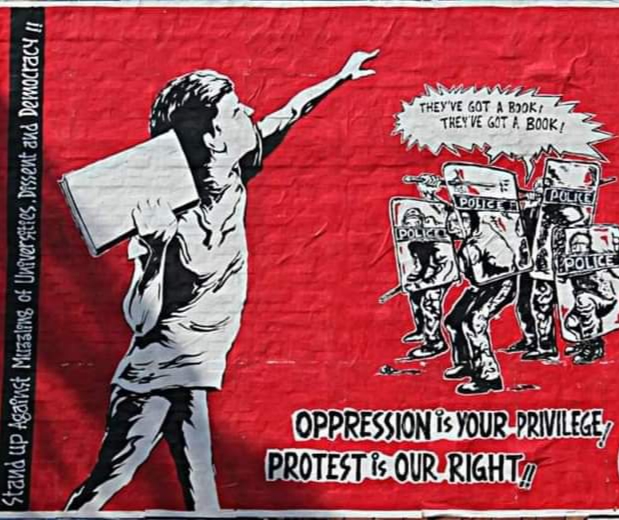 The vice-chancellor of Jawaharlal Nehru University (JNU) has, students say, ordered to remove wall posters pasted all over the campus.

In response to the order, the president of the JNU’s student union, N. Sai Balaji has written an open letter expressing his anguish while highlighting the significance of walls – a space that enables students to express dissent through words and art.

The walls of the JNU writes this letter.

The walls that, as Eduardo Galeano said, has always been the “publishers of the poor.”

Today, these walls are being made barren and devoid of any language and grammar to communicate with students.

These walls are libraries of street, they are symbols of resistance, they are canvas for artists to portray a world filled with inequality, injustice and oppression through art, words, poems and paintings.

These walls are spaces of democracy, academics and art as they speak, debate and dissent with other walls, posters, paintings, students, teachers, workers, administration, government, nature, economy, foreign policy and the world outside on every issue and subject.

For decades, these walls have communicated with visiting ambassadors, high commissioners, bureaucrats, professors, politicians, head of the state and whose who of the world. These walls of JNU aren’t just walls but they are spaces of learning, they are platforms for ideological debates and they represent a unique but powerful expression of our constitutional and democratic freedom.

Today, this tradition is under attack by the fascists in power – not only in the campus but everywhere in the country. Artists are being hounded, sedition cases are being slapped for making cartoons, FIRs are being registered for writing poems (Miya poets are being arrested for their poems on national register for citizens), social media posts are fuelling mob violence and the very Constitution of India – basis of freedom of expression and citizens rights – is being burnt on the streets of the national capital, at the doorsteps of our parliament run by the fascists.

At a time when fake news and lies have become a norm and speaking truth a crime, these walls of JNU are bearing the brunt of the fascist state. The walls whose art gets widely covered in the national and international media and that which forms the base of many thesis and dissertations. This shows how the state trembles at truth, if spoken – especially through walls meant for voices of the streets and the masses. These fascists fear the walls of JNU because they represent ideas that build India; the ideas of justice, equality and liberty, and a society free of oppression.

Mandela, Ambedkar, Periyar, Savitri bhai, Pule, Marx, Ashfaqullah, Rosa Luxemberg, Lenin and many others whose books and ideas have been bundled and stored inside libraries spoke to them. These walls unpacked their ideas, brought them closer to the people on streets; they made the masses to understand the essence to resist and cherish the resistance.

They were yesteryear’s social media for youngsters that brought out their creativity and gave them the freedom from fear to speak their mind through art, words and paintings. However the way social media has been taken over by trolls of the fascists, who wait to hound, today the government and the university administration are taking down the wall posters of the university.

Mamidala Jagadesh Kumar, the vice chancellor (VC), says that the university has adopted Delhi Defacement Act and therefore these ideas, posters, painting and walls itself are a “defacement”.

Mr VC, please tell me – “Is speaking about Bhagat Singh “defacement” in a university? Is learning annihilation of caste from the walls “defacement” ? Is experience of women like Rosa Luxemberg, Savitribai and other who are speaking through the walls of JNU “defacement” ? Is preaching rationality that is the essence of Indian constitution by Periyar who is standing tall on JNU’s wall “defacement” ? Or is writing and painting about the legacy of Birsa Munda whose life is a celebration for anyone and everyone who fights for tribals and forest rights a “defacement”?”

At a time, when tribals have been butchered in Sonbhadra and Uttar Pradesh for defending their land, shouldn’t the walls be roaring in their defence? or do you want to silence the voice on the wall as “defacement”?

Mr VC, you have imposed 80% budget cut on JNU’s library and now you want the libraries of the street to be vanquished through force calling them “defacement”. The walls of JNU would like to ask you – will a library filled with books with blank pages make any sense?

Similarly, how can the walls of a university filled with creative energy lie barren? Isn’t leaving libraries without books and walls without posters – devoid of ideas, art and paintings of students, – the real defacement?

The walls of JNU know the truth behind your “defacement act”.

It’s the order of the day, by the present government, to turn universities into places of programming students in one thought. Anyone resisting this indoctrination of RSS will be silenced and punished. Student activists along with JNUSU office bearers were “academically suspended”, now the walls of JNU are being silenced by bringing them down.

Modi government 2.0 has made it clear through the new education policy that universities are for sale. Hence the walls that speak and resist have to fall, just how the libraries are being starved of funds and books.

Modi government has turned away from the “grant model” to shift towards “loan model” – where universities have to take loan from the Higher Education Funding Authority, to build infrastructure and buy books. Who will pay back these loans?

Since the posters on walls speak truth to power, they have to be pulled down. Speaking walls have to be silenced so that students, too, are silenced against mortagaing and bartering away of their future.

This is the new India which Modi government wants to build.

Law universities – where the defenders of our constitution are trained – are becoming costlier and the poor are being turned away because they are unable to pay the fee. Cost of medical education, engineering and other courses is soaring like rising temperatures due to global warming, making the poor vulnerable by denying their right to learn.

These walls can be called Mandela of JNU, just like Nelson Mandela when jailed for decades, was isolated so that he couldn’t meet his people fighting on the streets. Yet his resistance within those four walls became a symbol of resistance for others outside, who fought apartheid taking inspiration from him.

Similarly today when universities are caged into profit making centers, these walls are Mandelas of universities. They were for the poor, built by the poor, however today they are being silenced and sold.

In Germany, the fascists burnt books and closed down libraries. In India, where there is no money to buy books for libraries and no space left for teaching and inspiring students, is also being brought down.

This is not just a story of wall art of JNU, but a reality that is happening on the streets in name of cleaning up “defacement”. Indeed, ideas are a threat to the fascists and carrier of these ideas, the walls of JNU, are criminals.

Students of JNU will resist this “defacement” of ideas.

They will march and paint those walls with truth. They will resist the fake news peddled through whatsapp, by these walls: not barren but filled with ideas, words and art of young minds who wish to change the world in order to make it equal, just and free of oppression.

The administration and the government might put the students behind the bars and bring the might of state upon them. But they have forgotten that young minds filled with ideas and resistance are like seeds – it will grow on every injustice.

The state might burn down the posters and bring down the walls but they can’t stop the seeds from ripping.

The resistance has begun.

It will rise until the victory of freedom of expression. To quote Gandhi on civil disobedience, “An unjust law is itself a species of violence. Arrest for its breach is more so. Now the law of nonviolence says that violence should be resisted not by counter-violence but by nonviolence. This I do by breaking the law and by peacefully submitting to arrest and imprisonment.”

The students of JNU are going on a movement of civil disobedience in order to protect and cherish freedom of expression.

This students movement is inspired by the idea of “revolution” as described by Bhagat Singh during his trial. He said:

“The whole edifice of this civilisation, if not saved in time, shall crumble. A radical change, therefore, is necessary and it is the duty of those who realise it to reorganise society on the socialistic basis. Unless this thing is done and the exploitation of man by man and of nations by nations is brought to an end, suffering and carnage with which humanity is threatened today, cannot be prevented. All talk of ending war and ushering in an era of universal peace is undisguised hypocrisy. By “revolution”, we mean the ultimate establishment of an order of society which may not be threatened by such breakdown, and in which the sovereignty of the proletariat should be recognised and a world federation should redeem humanity from the bondage of capitalism and misery of imperial wars.”

It is this idea of society that the students want to fight for. The walls of JNU showed students the condition of workers in Latin America who were exploited and killed to mine silver and gold. These walls decorated millions of individuals who died fighting against colonialism in Africa, India and other parts of the world. They narrated how today’s imperial powers are replicating the same with neoliberal policies and capitalism.

Its important to remember what Ambedkar said in the book – Writings And Speeches: A Ready Reference Manual:

Till then the Walls of Revolution Live!

All images by special arrangement