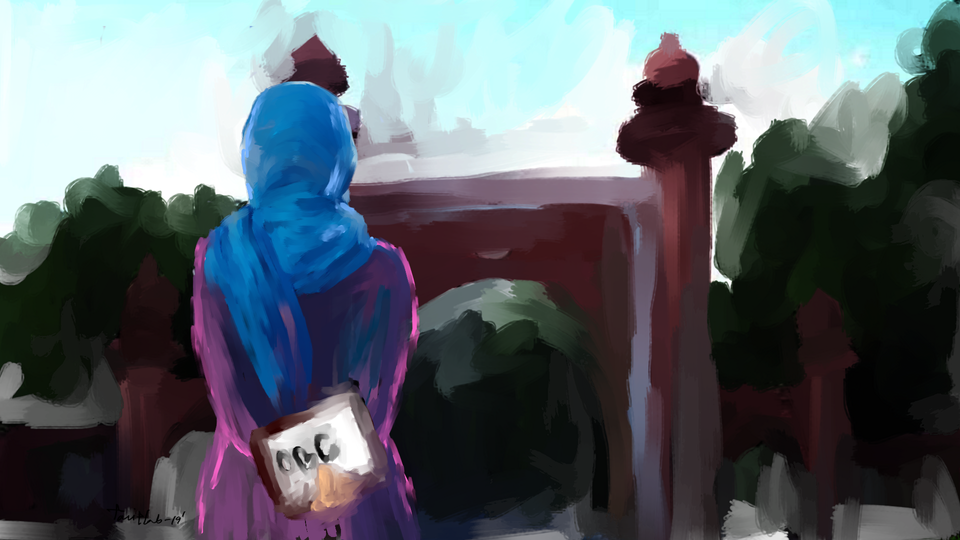 I studied at Aligarh Muslim University. Being a minority institution, religion was never an issue.

But unfortunately, caste was – and still is.

I kept my caste-identity hidden for all the five years I was there.

My surname is Siddiqui, which is actually a Persian name, but many thought that it was my caste. Siddiqui is a surname of upper-caste Muslim communities.

At college, I would not let my friends and even my best friend know that I come from the OBC community. My parents told me the same because they were sceptical about how my friends would react if they find out my real identity.

My father is a lawyer and therefore, my professors thought that I belonged to a good social background. Hence, I didn’t face any problem.

But I could see how other students from lower-caste communities were treated.

In my class, there were some students from Ansari and Saifi community – lower caste groups among Muslims. And there were only four students who belonged to the OBC category.

One of my friends, who was from SC category, was always isolated by upper-caste students. They would never hang out with him.

My own friends used to cast their suspicion on me sometimes because of the area where I used to live, which is home to people from lower-caste communities. My friends would constantly ask questions like, “Where do you live?” or “Kahi tum unme se to nhi ho? [You are not among them right?]”

I used to get really scared. I was hardly 19.

Also, most upper caste Muslims are fair and lower-caste Muslims are not. I am not. My classmates used to indirectly bring that out. Sometimes, they would come to me and ask: “Are you really a Siddiqui?”

Not just students, professors too would create caste-based demarcations in class.

They would casually make casteist remarks at students from lower caste groups. These students would never get good marks irrespective of how hard-working they were. If you see them now, they are doing really well in their fields – even better than those from upper caste groups.

But back then, professors would assume that students from lower-caste communities are not really serious about education. But I know that wasn’t the case at all.

You see, our ancestors were not as educated as ancestors of people from an upper caste. So, obviously, the upper-caste students have an edge over others. Hence, professors would support them.

On the other hand, these professors would make us aware of our caste during class discussions.

They would ask questions like, “Which caste are you from?” or “Achha, abba kya karte hain? Unka surname batao? [What does your father do? What is his surname?]”,  in a fun and not-so-serious manner.

And then there were some teachers who would ask about your locality. In the Muslim community, you can easily figure out a person’s caste by their locality.

And it wasn’t just the students – upper-caste professors (both Hindu and Muslim) would also sideline colleagues from lower castes.

There was a proper lobby, so much so that they barely let any OBC Muslim step in as a professor. If there were, say 30 professors, only one of them would be from OBC category.

I remember my seniors telling me about one OBC professor who was hired on contractual basis. He was very hardworking and students liked attending his lectures. But, as I was told, another upper-caste Muslim girl was made permanent and not him. He resigned and only came back as a permanent faculty years later.

I sometimes feel that tomorrow if I ever get a chance to apply at AMU revealing my caste-identity, they would probably not take me in.

I think there’s no point hiding my identity because in the end, what matters is how good you are.

However, trust me, wherever you go, your caste follows you.

I am currently pursuing post-graduation in a well-known government college. Here too, some students are not not cool with SC/ST groups. During discussions, I hear them say things like,”You know that girl is a SC/ST.”

However, unlike AMU, religion is a bigger issue than caste at my present institution. There are only a handful of Muslims in my batch and they too suffer the same ostracisation like my lower-caste friends did at AMU.

I think in earlier times, things were not that grim. My father has many upper-caste friends and they don’t have a problem with his caste. But apparently my generation is not okay with it.

And I think this will only get worse.

The more we move toward a modern society, the more we are being caged because of the inherent casteism within all of us.

No resistance, no action

But there’s also no resistance as such. Neither from the individuals who suffer nor from the institutions.

My college too did not take any action against those perpetuated such discriminatory practices. We had all kinds of discussions – gender, politics, labour, technology, class differences – but never on caste.

Absolutely no discussion on caste.

I think the only way to solve the problem is by not putting ourselves down. I have observed in many OBC families, parents tell their children to hide their identity. Obviously, the child will feel that there’s something wrong with his or her identity.

I felt the same. This shouldn’t happen.

As far as university spaces are concerned, students and professors should be more open minded. People from upper caste communities should understand their privileges. They should accept it and live in harmony with people from all communities.

This story is part of LiveWire’s series – On The Edge – centred around caste-based discrimination on campuses across India. If you wish to share your experience too, write to us at [email protected] If you are not comfortable writing, you can also let us know if you’d like to speak to our reporters.