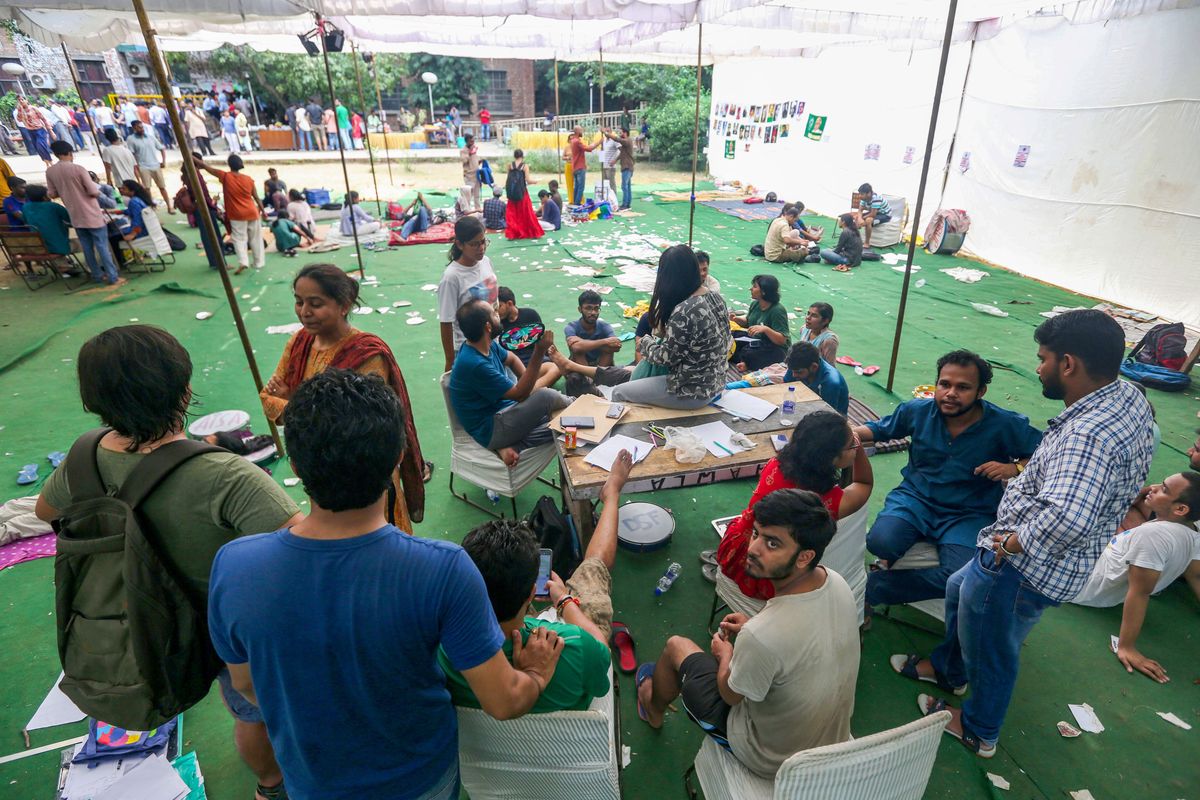 New Delhi: Polling for four positions of Delhi University Students Union (DUSU) will be held on Thursday, September 12, with over 1.3 lakh students being eligible to cast their votes.

“EVMs were delivered to the polling centres on Wednesday and strict security arrangements have been made. The Community Hall at the Police Lines in northwest Delhi’s Kingsway Camp will be the counting centre for the polls,” DU Chief Election Officer Ashok Prasad said.

“Over 1.3 lakh students will cast their votes at 52 polling centres. The results will be declared on September 13,” he said.

The keenly contested polls will see a woman candidate fighting for the president post from the Congress-backed National Student Union of India (NSUI) after a gap of 11 years. Its rivalAkhil Bhartiya Vidyarthi Parishad (ABVP) had last fielded a woman candidate in 2011.

Out of the 16 candidates in fray, there are only four women in contention, while two of them are contesting independently.

The RSS-affiliated ABVP has fielded Akshit Dahiya for the post of DUSU president, Pradeep Tanwar for the vice president’s post, Yogit Rathee for the general secretary’s post and Shivangi Kherwal for the post of joint secretary.

The NSUI has pitted Chetna Tyagi against Dahiya and Left-backed All India Students’ Association’s Damini Kain for the post of president.

The NSUI has fielded Ankit Bharti for the vice president’s post, Ashish Lamba for the secretary’s post and Abhishek Chaprana for the post of joint secretary.

On the security front, a senior police officer said, the assistant commissioners of police and station house officers of the northwest district will supervise arrangements at the counting centre.

Victory marches towards the university’s North Campus will be monitored by personnel of the north police district, the officer said.

Last year, counting was suspended over allegations of faulty electronic voting machines. It was later resumed.

The ABVP had won on three posts, while the Congress-affiliated NSUI had won on one post in the last year polls, which recorded a 44.46 % voter turnout.

Promises to remove inequality, fight for women’s safety, sending students to the Olympics and procuring concessional passes for the metro are among the promises made by various student outfits ahead of the polls.

On Wednesday, the Delhi High Court sought response of the University on a plea by three students, affiliated to Students’ Federation of India (SFI), alleging that they were illegally restrained from filing their nominations for elections to the post of office bearers of varsity’s students’ union.

Justice Sanjeev Sachdeva issued notices to Delhi University, its Chief Election officer (CEO) and Station House Officer of Maurice Nagar police station on the petition and listed it for hearing on October 17.

The court said the elections will be subject to the outcome of the petition.

The petition filed by DU students Ravi Kumar Chauhan, Noel Benny and Parmanand Sharma alleged that on September 4, they were going to submit their nomination papers to the office of the CEO when they were allegedly “prevented by suspected members of ABVP” from doing so.

September 4 was the last date to file nominations.

One of the three students was overpowered by the miscreants and his papers were snatched, the plea said, adding that when they again tried to submit the nomination papers, they were illegally obstructed.

The plea claimed that despite deployment of heavy police force, the officials did not do anything to save them and became mere spectators.

The petitioners sought direction to declare that their forcible prevention from submitting their nomination papers be declared illegal.

They also sought that non-acceptance of their nominations by the office of CEO be declared as unfair and illegal.

They sought direction for disciplinary action against the persons who had prevented them from submitting their nomination papers.

The results will be declared on September 13.