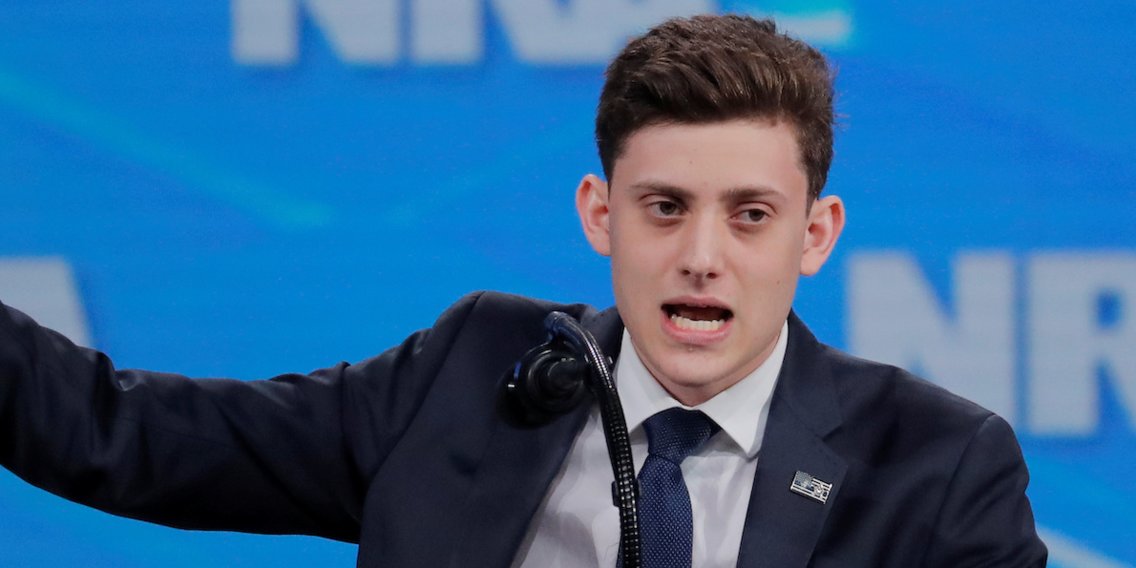 The tragic mass-shooting at Marjory Stoneman Douglas High School in Parkland, Florida on 14 February, 2018, saw the likes of Emma Gonzalez rise up as young activists, mobilising for sweeping new controls on guns. On the other hand Kyle Kashuv – another student from the school – garnered conservative support, as he defended the Second Amendment and said that school’s need to be made safer rather than infringing the constitutional rights of Americans to possess arms.

In the months to follow, he appeared on Fox News, met with the president and the first lady in the Oval Office and went on to lobby for the federal STOP School Violence Act, which included several school safety measures in lieu of stricter gun control measures. He is also the high school outreach director for Turning Point USA, an archconservative group founded by Charlie Kirk.

Kashuv was accepted into Harvard in early 2019 only to have his offer rescinded in June. He took to Twitter on Monday to explain the reason behind this. Many racist and offensive comments that he made in 2016 on a shared study guide on a Google Doc surfaced last months.

Three months after being admitted to Harvard Class of 2023, Harvard has decided to rescind my admission over texts and comments made nearly two years ago, months prior to the shooting.

I have some thoughts. Here’s what happened.

His peers from school claimed that he used racial slurs while referring to black athletes and made anti-Semitic comments, even though Kashuv is Jewish himself. One screenshot of the alleged comments even showed him using the N-word more than a dozen times, claiming that he is really good at spelling it as “practice uhhhhhh makes perfect.”

On May 24, Fitzsimmons (Dean of Admissions and Financial Aid at Harvard) sent Kashuv a letter reminding him of Harvard’s right to withdraw offers of admission and asked him to submit a written explanation about his conduct.

Kashuv responded with an explanation and an apology for his comments.“Let me first state that I apologise unequivocally for my comments, which were made two years ago in private among equally immature high school students,” Kashuv wrote in his letter to the admissions office. “I said them, I regret them, and by explaining the context and my subsequent experiences I am not trying to excuse them.”

He also wrote to the Harvard Diversity and Inclusion office, apologising and asking what he could do to be a better person and work with them once he was on campus. After having his offer pulled, Kashuv asked for a sit-down with the office, hoping to cite his case better face-to-face but to no avail. There have been no further comments from the college on the matter.

Kashuv’s case is not the first time Harvard’s decision to rescind admission offers has become the focus of public debate. In 2017, the college rescinded offers of admission for at least 10 incoming freshmen who were involved in the exchange of racist and sexually explicit memes in a private Facebook group chat.

Another student activist from Douglas High School, David Hogg, was admitted to Harvard. As opposed to Kashuv, he is a gun control advocate. Many were quick to point out how Hogg was academically weaker than Kashuv but was still accepted to the Ivy League college

Comparisons were drawn, calling Harvard elitist, while some have said that having the correct (politically left) political views helps get into Harvard while having conservative views is clearly detrimental. Others have criticised Harvard for not considering the “rigorous moral character development” that Kashuv’s apology seems to convey.

Meanwhile, others who support Harvard’s decision have said that college admissions are supposed to be based upon what a student does in high school, and the college has every right to rescind the offer. There have been claims that the statements on the Google Doc were not a one-off instance of racist and sexist remarks made by Kashuv.

Other Stoneman Douglas graduates appeared to welcome the news that he would not be going to one of the nation’s most prestigious universities. Some made vague comments on social media about “consequences;” some sent Mr. Kashuv “thoughts and prayers,” a gesture that victims of gun violence have seen as an empty one, especially coming from opponents of gun control.