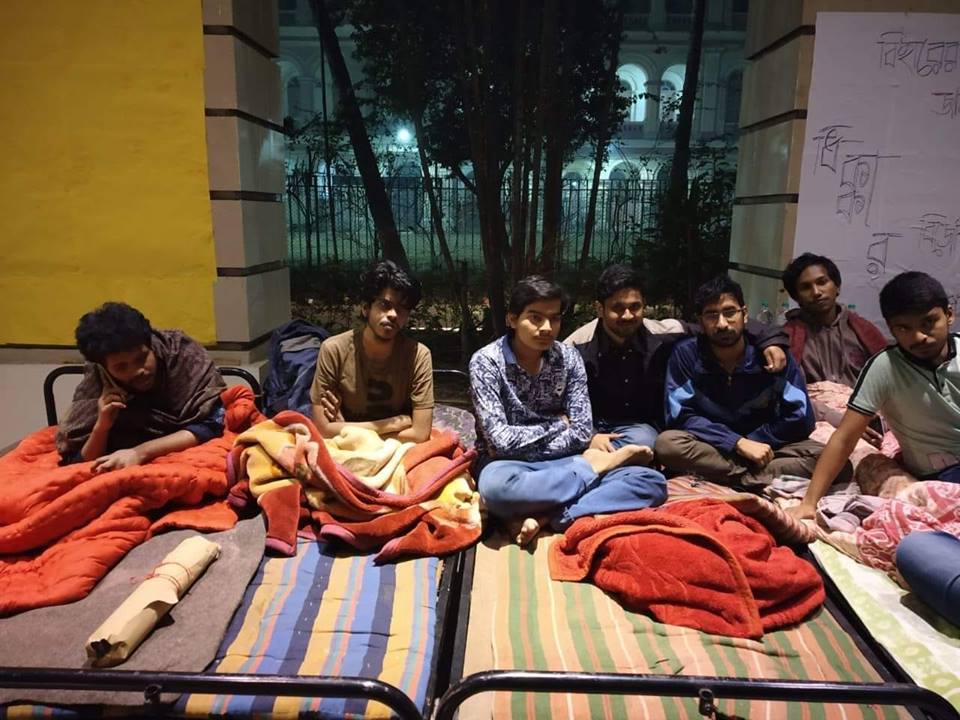 Today, January 23, 2019, marks the sixth day of the ongoing indefinite hunger strike at Kolkata’s Presidency University. Gathered at the portico of the main building, students are demanding the administration to cancel the suspension order of three of them who lead the protest against the delay in Eden Hindu hostel’s renovation.

The protest continues despite the vice chancellor Anuradha Lohia appealing them to call off the protest ahead of Nobel laureate Venkatraman Ramakrishna’s speech at the university, the Times of India reported.

According to the Telegraph, on September 10, 2018  – as part of the agitation – the three students had locked the main gate of the university campus to prevent Lohia and other officials from entering the premises. Due to unrest in the campus, the authorities had to shift the convocation ceremony – slated a day later – to another location.

Subsequently, on December 19, 2018, the administration suspended three students for six months and issued an official warning to 18 others for indulging in the act, the Times of India reported.

As per the suspension order, the three students cannot attend classes, take exams and participate in any academic activity and the 18 others “will neither find a place on the institution’s honour role, nor be entitled for any award,” a source informed The Times of India.

Almost a month later, students dispatched a written appeal to the authority asking to revoke the suspension order. However, Subho Biswas, spokesman of the agitating students, told PTI that the authorities turned it down and instead, asked them to apologise.

The students refused to apologise and rejected the claims made by the officials. Subho Biswas – spokesman of the agitating students – alleged that the committee did not take students’ opinions into account before arriving at the final decision, PTI reported.

The dean and registrar office also dismissed their request leaving them no option but to go on an indefinite hunger strike. Ujan, who currently studies at the university said, “After our repeated demands to the authority went unheard with the authority even refusing to release the report stating the reason for there suspension the 3 suspended students have finally decided to undertake an indefinite hunger strike unless the suspension is revoked.”

Com. @Sandeep_Saurav_ in solidarity with the hunger strike at Presidency University, Kolkata, against the illegal suspension of students. pic.twitter.com/1oYqpKkkZI

The series of protests at the university dates back to July 29, 2015, when the administration decided to shut down the Hindu hostel for repairs. According to Livewire’s previous report, 150 boarders were shifted to a rented accommodation in New Town.

Although the authorities had promised to re-allocate the boarders to the renovated hostel but they did not, forcing the boarders to stay in main building’s first-floor corridor for days and falling sick as a result.

On October 12, 2018, the students went on a 10-day-long hunger strike forcing the authorities assured students that they will provide them with accommodation by mid-November but they did not leading up to another sit-in demonstration in the campus

After a series of protests and multiple agitations, the students finally got back their hostel. However, it was only a partial victory because the authorities suspended three students for participating in the movement.