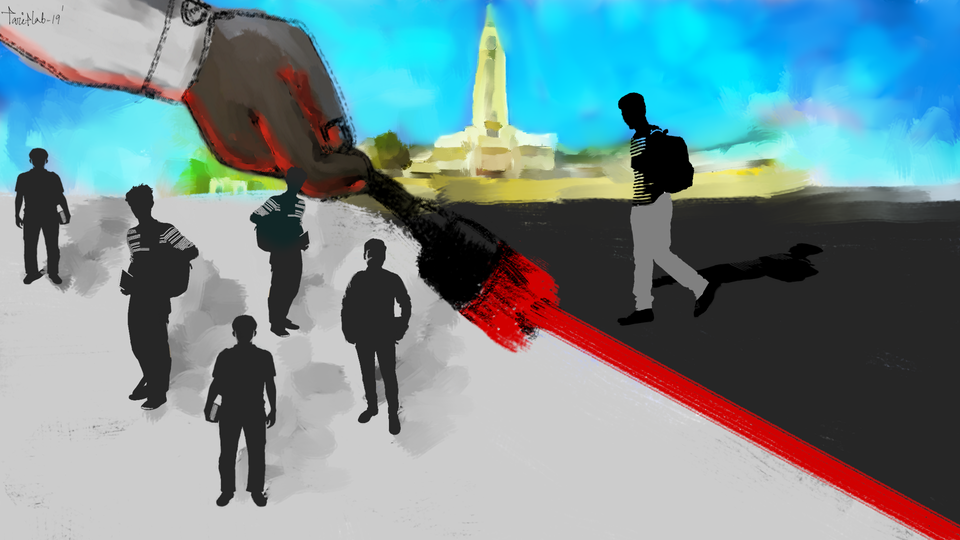 One of the first things that was hammered into my head during the orientation session at Birla Institute of Technology and Science (BITS), Pilani was how proud I should be about the fact that I got into this college entirely on merit – a fundamental part of BITS’ ethos.

There are no reservations of any kind besides a very small handful of seats – in limited streams – for students from certain schools in Pilani and children of employees at the Birla Education Trust.

At the orientation, the administrator was positively ecstatic while describing how everyone present there deserved to be there; everyone seemed to agree that casteism had no place within a campus like ours.

And to some extent, he was right: in my four years as a Dalit at BITS, I never faced any outright casteism.

Instead, what I experienced was a variety of moments – big and small – of institutionalised casteism.

The atmosphere at BITS has been designed to encourage students to think beyond caste since we were all there based on “merit”. It convinced us that those who didn’t get in were not good enough.

However, it also ensures that we don’t critique the very idea of “merit” which, according to me, is flawed in a system that debars numerous entrants from even applying.

BITS’ high fee, computer-based entrance exam and lack of reservations exclude a majority of potential SC, ST, and OBC candidates without ever having to identify them as such.

This has created a relatively homogenous population of predominantly upper-class and upper-caste students who, by virtue of their relative homogeneity, would not need to engage with the reality of caste in college and society.

The college’s system thus ensures that we carry forward all the worst assumptions that society has about reservations and reserved category students: their capabilities, backgrounds, and so on. It creates an environment wherein we are made to believe that casteism doesn’t exist and we are discouraged from questioning our own complicity.

It was an environment in which I could never have openly discussed my Dalit identity.

I was isolated by virtue of a lack of other Dalit students. I was always in the minority in any discussion that centred around societal issues of caste and reservation. I was never comfortable enough to disclose who I was because of the constant narrative – both complicit and implied – shared by so many of my peers that assumed that my Dalit and lower-caste batchmates were “not good enough” if they needed reservation to enter spaces that were otherwise closed for them.

The first time I was confronted with BITS’ problems with caste was when I was outright asked: “Hey, you’re a Tam Brahm, right?”.

It’s a question that seemed innocuous enough the first time, and I simply responded: “No. I’m Tam, but not Brahm.”

I used that response the second, third, and fourth time I was asked the same question, and found different ways to avoid answering the follow-up question: “Oh, so then what are you?”

I knew the answer, of course.

BITS’ admissions policies unintentionally create a situation where the idea of someone being from Tamil Nadu but not being a Brahmin while still having managed to get admission seemed bizarre; it was an idea that just didn’t register. Non-Brahmin/upper-caste Tamilians were a rarity and Dalit Tamils even more so.

This sort of disconnected view of “wait, why aren’t you like us?” would reoccur whenever a certain professor would offer to perform the ceremonial rituals for students who wore their sacred threads, and someone would ask me why I wasn’t coming to get mine done.

Another illustrative example of BITS’ problems with caste came in the form of a passing conversation with a close friend. He was describing a recent internship experience. His internship coincided with that of a group of students from another highly-rated public engineering college.

While discussing his work, he began to comment on how poorly that other group of students was performing, and mentioned how he wasn’t surprised to find out that they were reserved-category students.

It took a moment of silence and some hasty back-tracking for him to clarify what he meant, but the message was fairly clear: it’s safe to assume that if you’re a reserved category student, you’re probably going to be substandard at your work.

These sort of casual remarks were not infrequent, and made me feel better about practicing self preservation by not telling my friends about my background.

My final example of BITS’ problems with caste comes from a long, heated discussion I had with some of my closest friends in that confusing period just after the CAT results had been announced.

We discussed the results of people we knew, and who we thought would clear the perceived interview-call cut-offs for “GEM” candidates (General Engineering Males). The conversation inevitably veered towards reservation, and how “unlucky” they were not to be eligible for lower cut-offs.

From there, the discussion shifted to verbal attacks on all those “rich” Dalits/OBCs/STs that they knew who would be abusing the system.

What was never discussed was why there were so few candidates from marginalised communities that were applying (which was the real cause for such low cut-offs). The conversation never dwelled on how those sole exceptional cases of “abuse” that they had heard of tended to be distorted or outright false second, third, or fourth-hand accounts.

We never talked about how the relatively rare true cases were less in the nature of abuse by rich Dalits and more in the nature of a second-generation reservation beneficiary being one of the few success cases in their community.

The unspoken thought I always had was: these people feel this way about an imagined other, so how would they feel about me?

None of these are the sort of examples that one would think of as obviously casteist. No slurs were cast, no atrocities committed; there was no incident that would make the news.

But what they added up to was a system that perpetuates institutionalised casteism.

The system brought in an overwhelming majority of upper castes and communities (I don’t recall meeting a single other Dalit in my course or batch), which meant that in class discussions and in the design of school policies, other perspectives were less likely to come up.

The system taught us to look down on people who needed reservation to access education and jobs, which by proxy meant looking down on the communities themselves.

The system basically allowed us to pretend that caste didn’t exist, and thus locked us into our rolls as agents in the propagation of casteism.

I’ve often wondered since I graduated what could have helped the college shed its inadvertent casteism. I’ve found myself comparing BITS to the university I attended afterwards, where I’ve felt so much better about my identity and my safety.

What was different? What could BITs have done better?

The reality is, it wouldn’t have required all that much.

So long as BITS maintains its aversion to reservation, a lack of representation will always exist. At the very least though, the provision of more SC/ST/OBC-focused scholarships from the University’s side could at least mitigate the cost-aspect that prevents them from applying.

The campus already offers a number of merit-cum-needs and other Scholarships, so a targeted approach wouldn’t have been such a stretch. I feel so much better now simply because there are more people like me. Representation matters, and this could help BITS’ demographic issues.

BITS has a great system of providing optional courses, and some of my favourite optional courses came from the Humanities Department. Courses like Modern Political Concepts and Gandhian Thoughts already lay a great foundation for subaltern thinking, but an explicit course on Ambedkarite Philosophy could help immensely. The exposure I’ve gained in my new university to broader ways of thinking have helped me immensely, and the roots of such an exposure already exist for BITS to nourish.

One of BITS’ biggest USPs has always been its student-driven approach to college life, but student activism was always limited to specific issues within the campus. There were very few active student groups that focused on discussing the larger world outside or on engaging with societal issues.

Student activism is a controversial topic and engineering students often feel like they shouldn’t get involved, but BITS has a history of students speaking out. The college was shut down at times in the 70s and 80s. We’ve seen pictures of mass student agitations from the earliest batches.

Even in the current decade has seen multiple movements centred around campus issues like mess food, fee hikes and women’s curfew timings.

That energy, directed toward issues like caste, could be transformative.

Ultimately, BITS was never the worst place in which to exist as a Dalit. Most of the casteism I experienced came from ignorance, not from malice. Some of the people I met there are now my closest friends and allies, people I now feel comfortable enough with to discuss my Dalit identity. In many other ways, BITS has been great in responding to the pulls of society.

But like all other institutions, there’s just so much room left for growth.

The author can be reached at [email protected]m for feedback, comments and individual experiences regarding issues mentioned in the story.