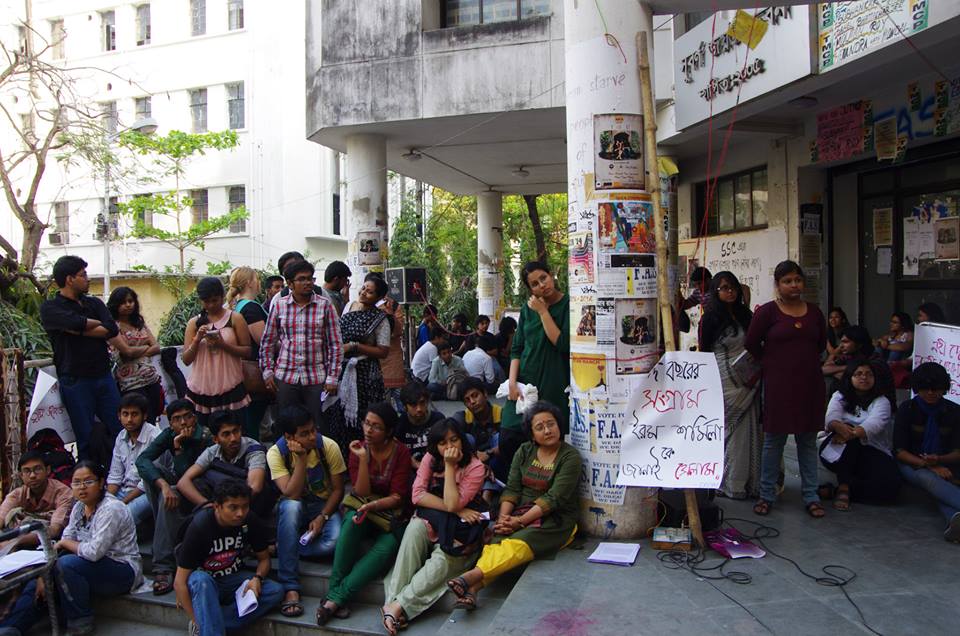 After two incidents of violence in the last week, Jadavpur University’s (JU) administration has enforced new rules to tackle campus security issues, but students feel the new regulations violate their right to freedom. New rules now require individuals entering campus between 8:30 PM and 6:00 AM to carry valid identity cards issued by the university. The administration has also banned the consumption of any alcohol or narcotics, in addition to illegal substances on campus.

On October 7, at roughly 8:00 PM, a group of people who were hanging out outside the engineering building’s playground, hurried to carry their friend – Abhinandan Chakraborty a student of Asutosh College – to the guards’ room to ask for urgent medical help. They claimed that Chakraborty was given acid in the name of alcohol by an unnamed middle-aged man and now needed immediate medical attention. However, the students claim that instead of helping them, the guards attacked the group, saying they were outsiders – not JU students – and were misusing the campus space for drinking.

Several people gathered as the argument continued, and in the ruckus, witnesses say that a former JU student, Shovan Biswas, slapped the unnamed middle-aged man. The chaos increased as others stepped in to stop Biswas and the accused man slipped away.

Students are demanding more transparent deliberation and an investigation into the events that occurred last week. Credit: Srijita Datta.

Biswas was soon joined by friends from the Main Hostel, which led to a brawl between Biswas’ friends and the others. Subsequently, two women, including the chairperson of the arts faculty students’ union, have claimed that they were manhandled by Biswas.

This was not the only security issue to crop up that week. The following day, on October 8, the campus was abuzz with several different versions of a story involving a student, Soham Chatterjee, who is a senior activist in the Students Federation of India (SFI). The gist of each version was that Chatterjee was taken to the Main Hostel and assaulted – sexually and physically. Some people claim that Chatterjee himself provoked it, some say that it was retaliation for him beating up several people the previous night. And then there are others who claim the whole thing is a hoax and that Chatterjee is lying about the whole thing, although he has visible wounds on his body.

Chatterjee has responded to these stories saying that he is not ashamed or scared and has urged other survivors to come out with their stories too. “This rhetoric or narrative is the same as that which patriarchy claims when a woman is raped. I have felt repulsed at their claims, but I’ve tried to maintain composure and will continue doing so,” he said.

“Inspection of an incident in isolation results in distortion of the facts, even more so in this case because they are inter-connected,” reads a formal statement issued by the Forum for Arts Students (FAS), in response to these incidents.

It continues, “Every person who has been accused must be held accountable for their individual actions, instead of maligning a particular space or community with which the person might be associated, be it the playground or the hostel.”

Meanwhile, Sourav Sahoo, a student of comparative literature and also associated with FAS, who visited Chakraborty in hospital, describes his condition as grave. “His trachea is blocked and he is unable to consume any sort of food. His family members are extremely disturbed as he is in the Critical Care Unit and is battling for his life,” Sahoo said.

These events have generated multiple opinions, rifts and a lot of confusion within the student community and organisations. In the absence of the student union taking any action, JU students gathered for a general body meeting where they tried to come to solutions.

On October 11, the general body decided to submit a deputation against the recently issued circular, as the authorities did not consult the student community before announcing these measures.

Students feel there is a need for proper investigation. Additionally, they want the administration to recruit new guards, and have both men and women.

The meeting concluded with the demand that the authorities should undertake an immediate transparent, impartial and complete investigation into the incidents that occurred on October 7 and 8, and added that necessary measures, punitive or otherwise, should also be enacted with the utmost urgency. The one thing that students are against is the administration’s attempts to increase surveillance under the guise of increasing security.

Srijita Datta is a student at Jadavpur University, Kolkata.