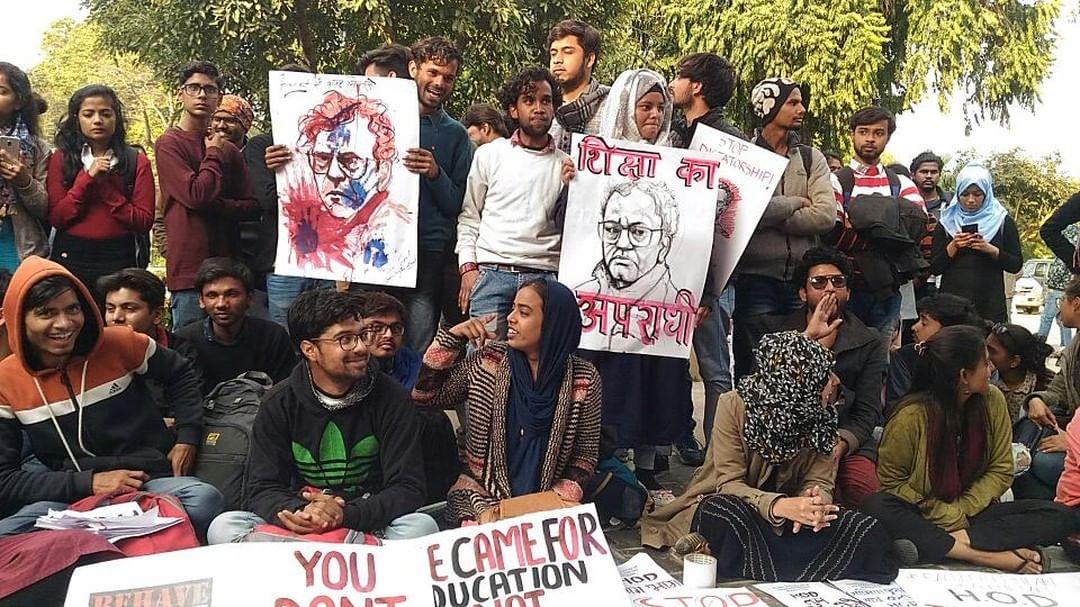 The administration, instead of looking into the matter, deployed a large number of police personnel on the campus. Consequently Section 144 of the Code of Criminal Procedure– which prohibits assembly of five or more persons – was imposed. However, the protest continues despite the barricades and restrictions.

ON THE 13th DAY OF PROTEST, SEC 144 HAD BEEN IMPOSED IN JAMIA MILIA AMIDST PROTESTS DEMANDING HOD'S RESIGNATION

The #JamiaMilia administration has imposed Section 144 and has deployed large number of security personnel on campus. pic.twitter.com/mWCdQdduKg

According to News18, it all started on January 31, 2019, when students decided to protest the lack of adequate faculty members in the department of applied arts. However, the HOD allegedly threatened to rusticate students and get them beaten up when he came to know about the student-led demonstration. Unfazed by his apathy, students continued staging protests on campus.

It gained momentum on February 7 when video footage of students assaulting female protestors went viral on different social media platforms. The protesting students claimed that the male students, who were on Ahmed’s side, beat up a few female students and allegedly groped one of them who was later hospitalised, Scroll reported.

Also read: Why Have Police and Armed Forces Become a Constant Fixture at College Campuses?

When students tried calling the police to file a complaint about the mishap, the administration immediately intervened and stopped them from doing so.

However, a day later, February 8, the administration sent Ahmed on leave and suspended the three male students who allegedly assaulted the student protestors. They also assured agitating students that they will constitute a selection committee of guest teachers to address the issue of shortage of teachers in the department of applied arts, Scroll reported.

The administration also constituted an enquiry committee comprising deans from six different departments to look into the matter.

However, according to Pinjra Tod’s Facebook post, the committee was formed without any student representatives or external members as per their demands. Additionally, the HOD hasn’t been suspended despite the students demanding his complete termination immediately.

To stand in solidarity with students in Jamia, Jawaharlal Nehru University student leader Umar Khalid visited the campus to participate in the agitation.

This article explains what the students are protesting against. Do read – https://t.co/QMRxSn5Tx2 pic.twitter.com/Im4dM0bpF2

The collective also pointed out that the statements issued by the administration and the Jamia Teachers Association seemed to align with Ahmed as they called protesting students “unruly mob”, “outsiders with vested interests” and what not.

The bias of the administration and the Jamia Teachers Association (JTA) is evident from the press releases and statements defending the HOD's actions and branding the student protesters as "unruly mob" "outsiders with vested interest" etc. RT: @sheikhimaan @mehartweets pic.twitter.com/kqeOiwYyUh

As per the demands raised by the protesting students, the committee was supposed to complete the investigation on charges of sexual harassment, regional discrimination, threatening students and others within two weeks. However, since the committee didn’t include students or any external member, they expressed a lack of confidence in the autonomy of the body.

Currently, the students have gheraoed the vice chancellor’s office amid heavy security deployment to press further their demands.