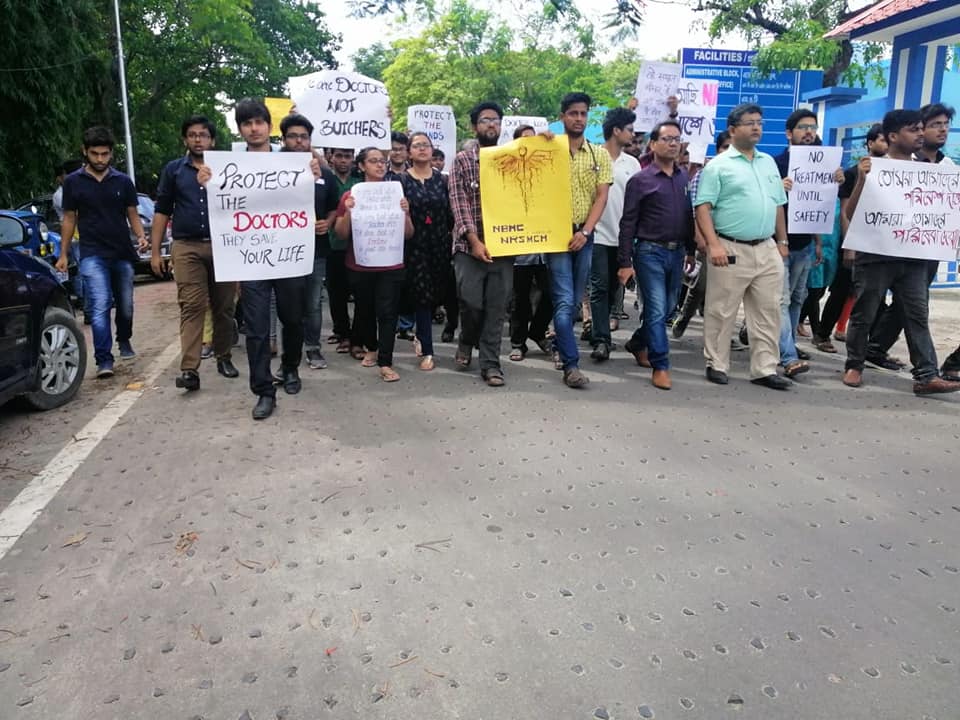 Students from different medical colleges in Kolkata are up in arms against the state government. They are demanding better security after a junior doctor at Nil Ratan Sircar (NRS) Medical College, Kolkata, was allegedly attacked, on June 11, by the family of a deceased person.

On Monday night, Mohammed Shahid passed away at NRS Medical College. As soon as his family members reached the hospital, they clashed with the junior doctors on duty alleging that the person died due to medical negligence, India Today reported. They added that the dead body wasn’t handed over to them on time.

Paribaha Mukhopadhyay, one of the two doctors, had his skull fractured during the attack but he, according to a statement released by the hospital, is now out of danger.

The next day, junior doctors from the same college went on strike, locking up the hospital gates and sitting on a dharna to protest against the attack. The day ended with the administration and students from other medical colleges taking out several protest marches across the city demanding better security for doctors.

On the same day, according to The Quint, a mob allegedly pelted stones at students at Burdwan Medical College, who extended solidarity with those protesting against the attack. However, Dr Utpal, the college’s vice-principal, said that no stones were pelted and such reports were “false”.

Two days after the incident, the state government released a statement saying that “5 persons have been arrested in connection with this case. All the 5 accused have been denied bail by the court and sent to police custody… The state government has decided to bear all expenses related to the treatment of the patient, Dr Paribaha Mukherjee.”

They also appealed to the students to withdraw the protest since all the necessary action was being taken.

Students, however, were not convinced. According to one student at North Bengal Medical College (NBMC), Siliguri, the state government must make security arrangements for medical students instead of asking them to stop the agitation.

“Our college is not in the main city and is located almost in the periphery of the state. In case a mob attack takes place here, where will we go? We will be sitting outside our college’s emergency ward to show support to our fellow junior doctors and demand better security. A lot of colleges have been under attack since Monday, but our chief minister has not released a single formal statement in this regard,” she added.

She also said that even if the death of the person was due to medical negligence – which she asserts is not the case – it was not right on the family’s part to take the law into their hands and attack the doctors at the hospital.

NBMC’s student representative, Sagnik Mukherjee, released an official statement yesterday saying that the OPDs will be closed for an indefinite period of time but there will be proper arrangements for extremely serious patients.

“There are chances of huge unrest here tomorrow and we have already received a lot of threats from the agitated public here. Even our hostels are under threat. We won’t back down. We will fight to the end,” the statement said.

Students from the All India Institute of Medical Sciences, Delhi, too, have extended their support saying that “the health ministry of the state should bear [the] full responsibility for this incident.”

They further say that there will be a nationwide protest if no necessary action, in favour of the junior doctors across the state, is taken at the earliest.