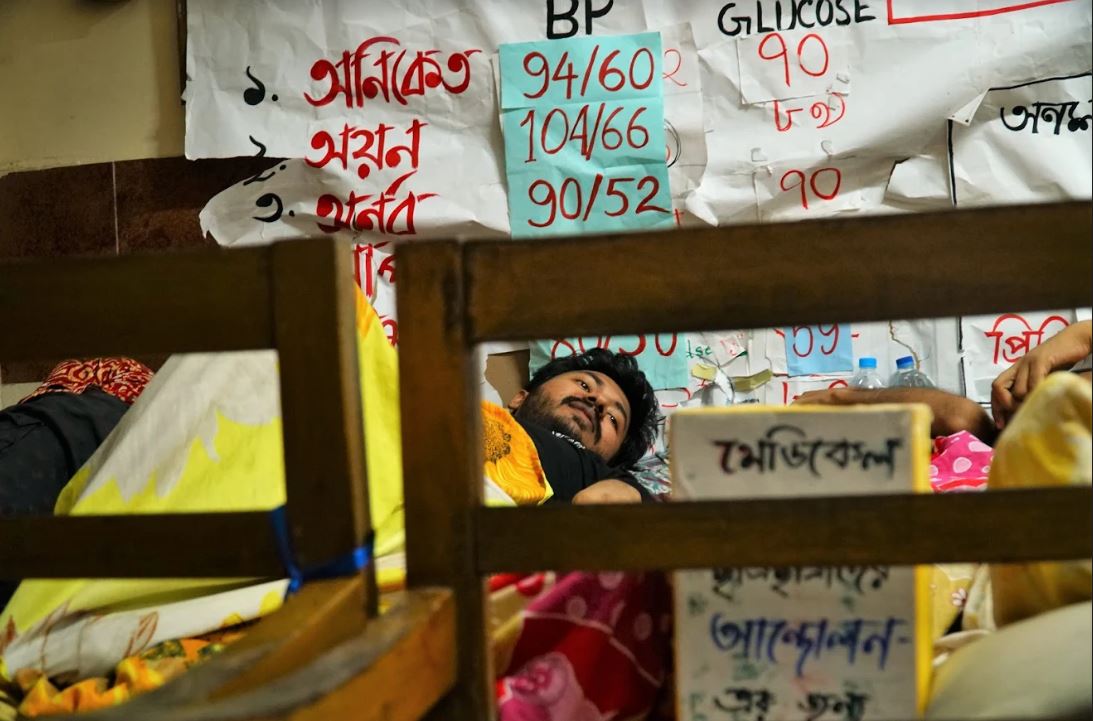 Students work hard for months, if not years, to get into Medical College, Kolkata. However, the same students are now cursing their choice. Students at the college have been on a hunger strike for the past 14 days, demanding basic hostel amenities like drinking water, hygienically-prepared food and humane living conditions. Three students have been hospitalised so far, but the authorities haven’t taken any decisive action yet.

Human excreta on the floor of the hostel. Credit: Satwik Paul

The MBBS students had been suffering quietly for years, but the camel’s back broke with the announcement of a new 11-storey building for first-year students.

Sudip Adhikari, a fourth-year student who had been on hunger strike for 100 hours, said, “Our demand has always been clear. We wanted the vacant spaces in the new building to be allotted to senior students as well, because our current hostel lacks basic minimum healthy living conditions. After principals repeatedly changing, our last principal finally admitted the problem. There has been no proper counseling done for allotment of new hostels. Although he wrote that our demands have been approved by him, he left the final call to the Director of Medical Education (DME). We will continue our hunger strike until we hear from the DME.”

The exterior of the boys’ hostel. Credit: Satwik Paul

Students blame “anti-social elements” for the litter outside the hostel. Credit: Satwik Paul

While pleased with the attention their cause is receiving, the strikers are upset that chief minister Mamata Banerjee and the state health ministry have not reached out to them.

Anirban Roy, another MBBS student, said, “Forget the CM. We got all this media attention after one of our friends, Aniket was taken to the hospital after he passed black stool yesterday. We are not trying to create a ruckus… we are simply demanding basic necessities.”

The common area of the hostel. Credit: Satwik Paul

Senior students, Sudin Mondal and Rohan Ghosh, gave LiveWire a tour of the hostel. Heaps of garbage on the premises provide a breeding ground for dengue, malaria, diarrhoea and other communicable diseases.

The hostel does not have a single water purifier. The washrooms are filthy beyond imagination. Some students even said that chunks from the ceiling often fall off and injure people.

“Until yesterday the dump-yard was full. Today morning two members of the cleaning staff came, only because the media has been frequently visiting the area for ground reports,” Mondal said.

The students’ strike has prompted social activists, other professionals and students from other colleges to march in their support. When asked if she was a student of MCK, Indrabati Sarkar, a 26-year-old blogger, said that even though she wasn’t a student there, her sense of social responsibility brought her to the campus.

She said, “The apathy being shown by politicians and the institute is heart-breaking. If this is the treatment being given to students, we need to join the movement. This is how democracy is meant to function.”

The students have decided to approach governor Kesari Nath Tripathi with the issue on Tuesday, July 24.