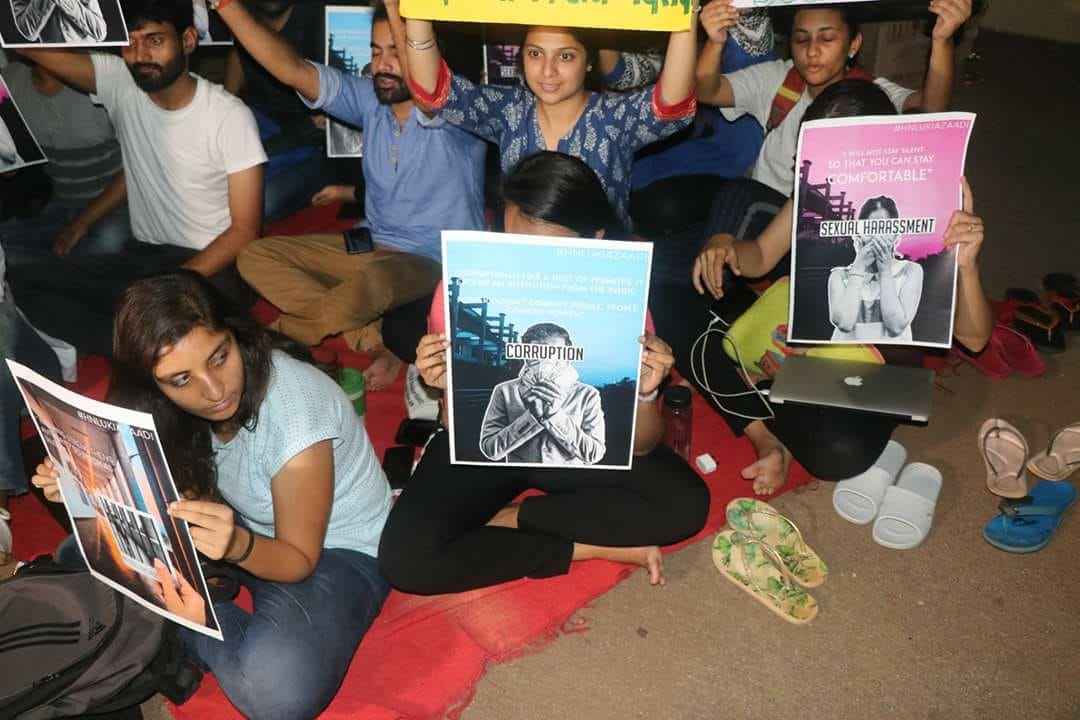 This move has crushed all the hopes and dreams that had arisen in the short but glorious month when HNLU was free from Singh’s control. In this month, we had open dialogues with the administration about the university’s finances, specifically funding for moot courts and other academic as well as extracurricular activities. Perhaps for the first time since Singh’s reign began in 2011, students found themselves dealing with a transparent administration that was actually interested in students’ views, all thanks to the interim vice chancellor, R.S. Sharma.

After Singh resumed office, we called a general student body meeting to submit a motion of no-confidence against Singh, since we doubt his administrative capability. Over three hours of talks with him about our concerns yielded nothing but denials and vague explanations.

One of the main concerns that arose after Singh’s removal was reports of persistent sexual harassment on campus. However, Singh responded to our demand to set up a sexual harassment committee with “Ab tak nahi kiya toh kya, aapne manga hi nahi” (So what if we didn’t have one set up till now? You didn’t ask for it.)

Enquiries about financial discrepancies were answered with contradictory statements – money was always disbursed, funds were always lacking, permissions were never denied. Most of our concerns were only met with hollow promises to consider students’ interests in the future and Singh expressed no regret whatsoever for previous inaction.

Grave allegations of corruption, sexual harassment and misappropriation of funds were trivialised as being “made an issue for no good reason.” The meeting was much like his 7-year-long tenure – ineffective and redundant.

The students of HNLU have lost faith in the incompetent administration of Dr Sukh Pal Singh & his style of arbitrary and discriminatory decision making. Therefore, we are skeptical of him being reinstated to the office of the Vice Chancellor.

In August 2018, 51 students signed a sexual harassment complaint against a faculty member and submitted it to Singh. According to Section 3(m) of the UGC Regulations, 2015, the VC is mandated to instantly initiate an inquiry. However, Singh unilaterally decided to only warn the accused and emphasised his opinion that students can sometimes misinterpret comments made in class. It is pertinent to understand that he had no authority to merely warn the faculty and decide to take action only if the incident repeated itself: he was obligated to hold a formal investigation.

However, to this date, the accused professor continues to teach and hold power over his accusers. As students, we have also heard of other instances where the vice chancellor’s office has interfered with the sexual harassment committee’s proceedings, pressurised students to take back their complaints, violating the sanctity of the committee and the complainants thereof.

Our VC is not only apathetic about the condition of the university but also callous towards students who do care about HNLU’s functioning. His tenure has been characterised by opaque administrative decisions, with students being given no avenue to raise complaints or give feedback on how our lives are run.

Students with disabilities have been deprived of basic equipment that is requisite for them despite several requests for the same, internal student funding has been stalled for years and money has been ploughed into new, unnecessary hostels. Even our hard-won fight for extending the library’s timings has been denied due to a supposed lack of staff, overlooking the fact that a library attendant is employed as a personal cook to the VC!

The HNLU student body can no longer accept “ho gaya toh ho gaya” (what’s done is done) as a justification for the degrading impact his apathy has had on our careers, academic interests, well-being and HNLU’s reputation. It is too late to accept any reassurances for future action; Singh has had seven years of authority to at least fulfil students’ requirements, even if he could not actively take steps to improve the general quality of the college.

While his efforts to improve HNLU’s infrastructure were his obvious duty, this cannot be used as a waiver of his accountability as the VC. A well-functioning university isn’t just a collection of buildings and mosquito-free ponds, it is meant to be a place where students have the opportunity to explore their interests and feel a sense of belonging.

As VC, Singh deprived us of these for seven years with his despicable actions. The blatant financial discrepancies in records clearly indicate that this administration must have counted on these actions never coming to light, much like an unreleased special audit report that we’re all still waiting for.

We, therefore, can settle for no recourse less than that of his resignation. We sit on an indefinite protest against corruption, against arbitrary decision-making, against protectors of sexual predators, against Singh and his lackeys. We sit to seek justice that Justice Hidayatullah sought to achieve for India and its citizens.