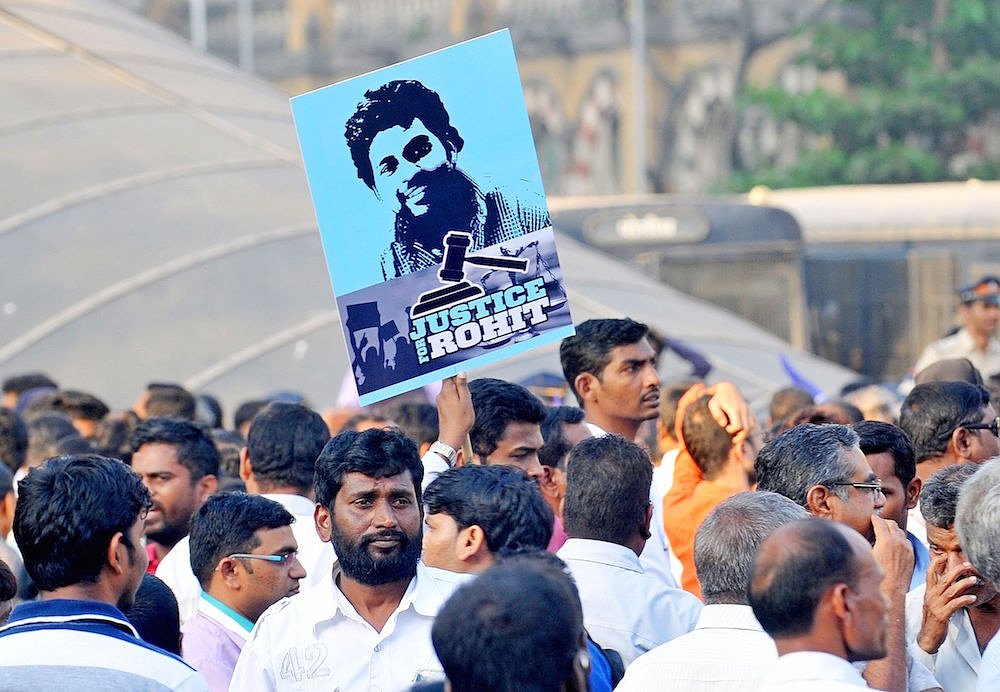 It’s been three years since a Dalit student and PhD candidate at the University of Hyderabad committed suicide, but the wounds the incident brought to light are still being ignored by institutions across the country.

University campuses and cultural spaces keep refusing or backing out of events  meant to memorialise Vemula’s life and work. This year, communities across the country decided to mark the date of Vemula’s demise with a screening of the documentary We Have Not Come Here to Die. However, finding a venue proved to be difficult in some cases.

In Chennai, the Chennai Book Fair reportedly backed out of screening the documentary in a last minute decision made by the organisers, Bapasi. According to documentary filmmaker Amudhan Ramalingam Pushpam, “Instead of the documentary on Rohith Vemula, the famous and classic Tamil film “Avval Appadithaan” (Dir: Ruthrayya) was screened.”

Bapasi did not respond to LiveWire‘s message asking for a comment on the cancellation.

The University of Hyderabad, where Vemula studied (and was ostracised) has also taken some extensive measures to curtail any dissent on campus in the wake of Vemula’s death.

A few days before his death, a temporary structure housing portraits of anti-caste icons on campus was mysteriously demolished overnight. The Velivada (literally ‘Dalit ghetto’) was first set up by Vemula and four other students after they were kicked out of their hostel, three years ago.

Students from the Ambedkar Students’s Association (ASA) rebuilt the Velivada on January 5, 2019 ahead of Vemula’s death anniversary which falls on January 17, 2019. However, the structure was gone the following day, leading to over 200 students protesting against the administration for hurting their sentiments.

The News Minute quoted a student, Prasanth as saying, “This is very emotional for me. Velivada stood as a testimony to the caste discrimination meted out to us. It was a testimony of our social boycott.”

Then on Vemula’s third death anniversary, the administration deployed paramilitary forces on campus to maintain security during an event organised to remember Vemula. The day also marked the first time that his mother and brother were allowed on campus in the past three years.

Security beefed up at the University of Hyderabad @HydUniv in view of a special programme organised by students on #RohithVemula's third death anniversary. Kin of #Vemula, #Najeeb's mother expected to visit the varsity to pay tribute at #Rohith's bust #UoH #ChaloHCU @TOIHyderabad pic.twitter.com/UfVq5AKH8j

Last year, on Vemula’s second death anniversary, security personnel barred journalists from entering campus to cover the event. The year before that, the administration detained a journalist from Frontline magazine for allegedly trespassing and handed him over to the police, but he was released without a case being filed against him.

The centre has shown a similar reluctance to allow Vemula’s memory to live on. In 2017, the Ministry of Information and Broadcasting refused to give a ‘certification for exemption’ to P.N. Ramachandra’s documentary The Unbearable Being of Lightness, without any explanation for its decision. The film was shot in February 2016 at the University of Hyderabad, just weeks after Vemula committed suicide.

The Unbearable Being of Lightness places Vemula’s letter at the centre of its narrative and builds on Faiz Ahmed Faiz’s poem Dedications to reflect on his death. The film was finally released online.

The Unbearable Being of Lightness from Ram PN on Vimeo.

Since Vemula’s death in 2016, the university and the government have actively ignored the opportunity to introduce any meaningful institutional changes. They have chosen to focus not on the causes of the tragedy but on Vemula’s caste, claiming he was not a Dalit in the first place. Hyderabad University continues to be in turmoil and dean Appa Rao Podile, who went on leave in the aftermath of Vemula’s death, has returned to his post and has even been given an award at the hands of Prime Minister Narendra Modi.

The political attention that has come to the case has also seemed opportunistic. Sukanna Velpula, Vemula’s friend, says, “Most political parties jumped into the fray only when they saw Rohith’s case was politically viable. No Left or liberal organisation wanted to to address caste as an issue until that point. Even now, they, at best, want it to benefit their political agenda.”

It is 3 Years of #RohithVemula's Institutional murder, yet accused under SC/ST PoA Act Podile Apparao, @smritiirani , Dattatreya, Susheel were not even examined. On the contrary false cases which were filed much later against students who are part of the movement are on trial. pic.twitter.com/DAx4OZtc7h

Obstructing people from remembering Vemula and reflecting on the circumstances surrounding his death is nothing short of institutional erasure. It doesn’t just prevent a community from coming together and seeking solidarity and closure, it also actively prevents others from learning about the systemic issues that caused such a tragedy. It shows what our country’s educational and cultural institutions’ priorities are and inclusion clearly isn’t one of them.