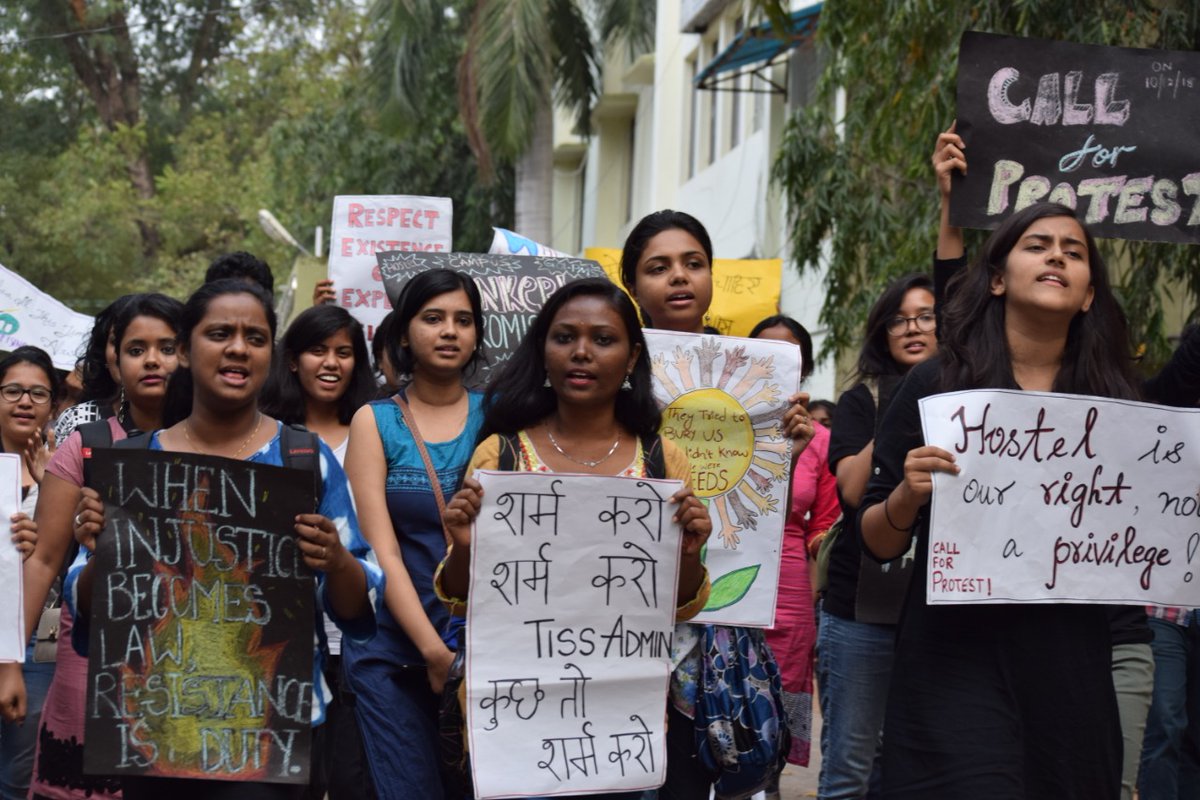 Life at Hyderabad’s Tata Institute of Social Sciences has never really been easy for its students. The ‘campus’ is a rented building, university hostels are far away and administrative responsibility is split between Hyderabad and Mumbai.

Students who can afford it, cope by living in private apartments that are much closer to the campus than the accommodation the college provides. And, outside the college’s ambit, they’re responsible for their own transportation to and from campus as well as security.

Students say it’s far from ideal. Whenever something goes wrong – from daily inconveniences to major incidents that require filing an FIR – they are left to their own devices. Sexual harassment by locals around these private apartments has become particularly troubling, but one student said that the college failed to help an aggrieved student file an FIR, and the local police too made it clear that the young girls were unwelcome in their neighbourhood.

In the midst of fee hikes and other financial changes following the UGC’s funding cuts to educational institutions across the country, students’ access to education and standard of living has taken a direct hit. And a recent decision by the Hyderabad administration has pushed several already-seething students over the edge.

A few weeks ago, students returned to Hyderabad after break, opened up the newspaper to catch up on what they’d missed – and received a rude shock. The college had published an advertisement saying that TISS-Hyderabad would cease to be a residential campus for future batches. The same notice also said that the university is deferring the start of the BA social science programme to the following year.

Immediately, the students raised concerns over these changes, pointing out that many prospective students won’t be able to afford TISS if these changes are implemented. As one MA student put it, education loans only cover official university-provided housing and without hostels, students without the means to live in private flats would simply be unable to attend TISS.

The administration wrung its hands in response to these concerns, saying all authority ultimately lies with the authorities in TISS-Mumbai.

On Monday, December 17, 2018, the student community finally decided to go on an indefinite hunger strike,  until the registrar and director fly down from Mumbai to address the students.

The month-long protest, led by the Student Action Committee (SAC), picked up momentum on December 10, 2018, when students from all the courses boycotted classes and forced the administration to shut down by camping outside the building.

Although the deputy director refused to address their grievances, a meeting was convened between the management committee and student’s representatives three days later, i.e. on December 13, 2018.

“Throughout the meeting, the students were interrupted and silenced, their legitimacy to raise the issues questioned and the collective demand of the student body was never addressed,” the student council’s press release, dated December 15, said.

Angered at this “humiliation,” the SAC decided to continue the administrative lockdown and stay on campus until the director and registrar address their demands. According to Newsclick, the Mumbai administration has called the Hyderabad students’ demands unjustified and asked the students to call off the hunger strike.

As per the New Indian Express, the administration has still not released any official directive on their decisions but the admission website says, “no BA programmes are offered from Hyderabad” and a newspaper advertisement calling for admissions does not include the BA-SS programme. It also says that the “TISS Hyderabad campus is now a non-residential campus.”

Student collectives, protest groups and activists across the country have been extending support to the students in Hyderabad for the past few weeks. Alumni from TISS Hyderabad also started a petition on November 1, 2018, asking the administration to revoke the decision.

Pinjra Tod, an autonomous women’s collective, posted on Facebook, extending solidarity. “We stand in solidarity with the students who are fighting for their right to higher education and demand the TISS admin to give in to the demands of the protesting community of TISS, Hyderabad,” said the post.

The secretive way in which the administration took these decisions has also left students feeling tricked and angry. Many think the decision was timed to minimise student blowback because many are currently off-campus for fieldwork or thesis research.

A public statement released by Professor Siva Raju and the internal management committee alleged that “a certain section of the student community is creating misinformation and pursuing propaganda by conducting protests against the administration.”

The attempt to scrap the BA social science programme is part of a larger academic crackdown on humanities courses at TISS. According to The Quint, TISS also decided to defer the MA in human resource management programmes and the MPhil in women’s studies earlier this year.

“Education is a right and if it’s not inclusive, it is merely a tool to preserve the existing power structure. Social sciences teach you to question, critique the power structure. Continuous fund cuts, scrapped BA, withdrawing scholarships, removing hostels is sadly happening in one of the premier social science institutes,” said Spriha Shukla, MPhil scholar at TISS Mumbai.

The Times of India quoted a protestor, Darsana J. Varier as saying, “There is no possible excuse to put forth for scrapping one of the best undergraduate courses in social sciences. At a time when the world is turning to this discipline of humanities for answers, an entire generation of the young generation is denied to explore. We want back our course and hostel. Is it too much to ask for?”

Other students are concerned about the university’s backtracking on its own professed goal of social inclusion. “I still can’t fathom the fact that a premium social science institute is a part of a systematic exclusion of the marginalised, not only that they have scraped an entire course. Never knew the stalwarts of this nation fears student unity so much. I hope the people sitting in the protest can knock some sense into the administration,” said Aratrika Ghosh, who graduated from TISS Hyderabad this year.