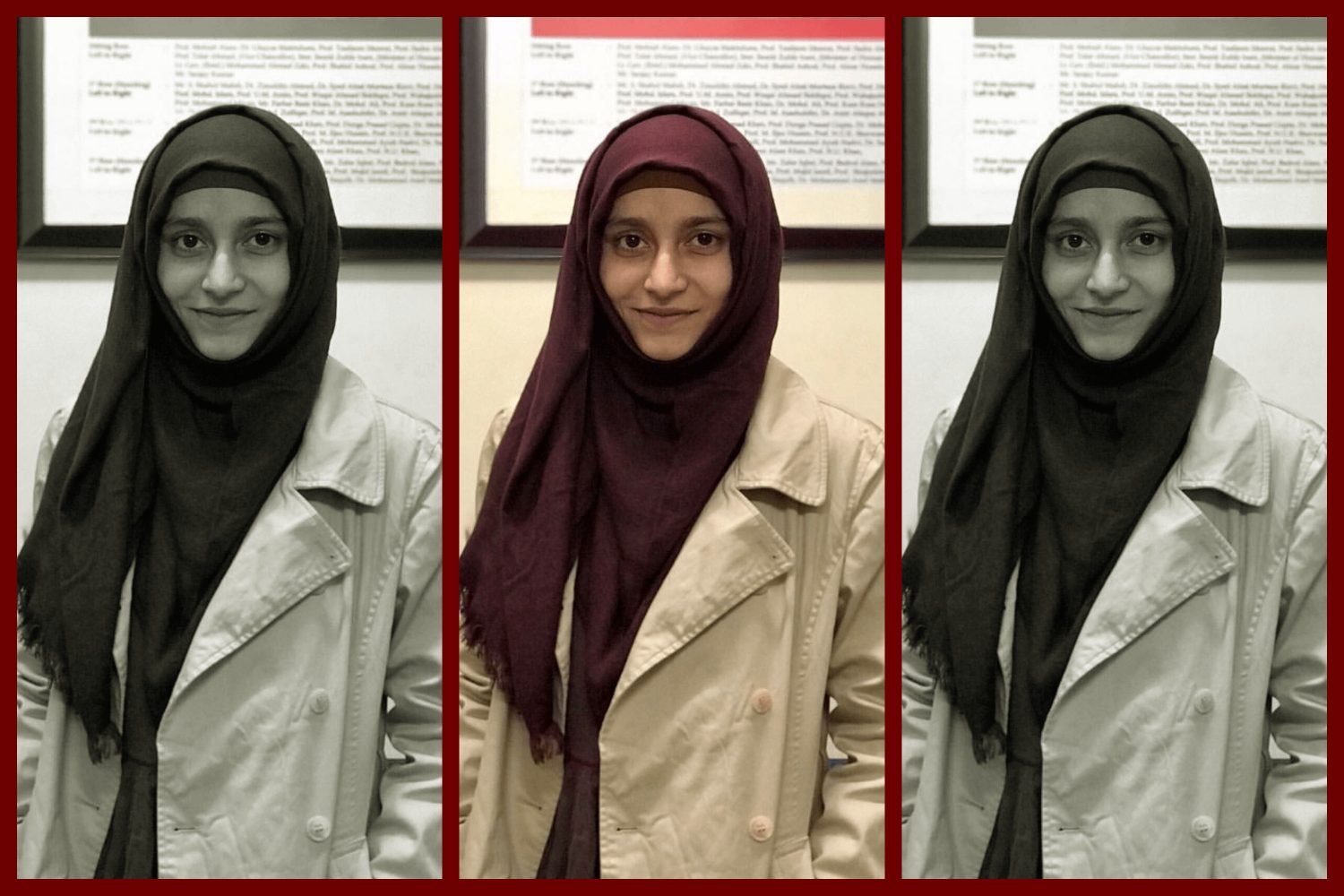 Students at Jamia Milia Islamia (JMI) university organised a protest on December 22, 2018 in solidarity with Umaiyah Khan, an MBA student from JMI, who was barred from taking the UGC- NET (University Grants Commission) examination on December 20, 2018 because she refused to remove her headscarf.

Umaiyah reached her centre, Ojas Institute of management in Rohini, New Delhi at 1.06pm and entered the gate at 1.15pm where a male staff member checked her admit card and asked her to remove her hijab.

She refused to comply and tried to explain him that the hijab was mandatory and in accordance with her faith’s practices. She was even ready to be frisked thoroughly and remove her hijab for the purpose of checking by the female staff present at the centre and follow the examination protocol. However, the staff did not listen to her.

“They didn’t give me any real choice except to remove my hijab and put it in my bag, if I wanted to sit in the exam. They did not respond to my valid question, when I asked them to show me the guidelines where the rules were stated, as nothing of that sort was mentioned on the hall ticket, they were not ready to even listen and kept repeating the same,” Umaiyah said.

“There is no such rule that expects you to remove your hijab or mangalsutra. It felt so humiliating, they were publicly asking me to compromise with either my values or educational rights,” she added.

By asking her to remove her hijab, the officials threatened her fundamental right to practice her religion, which is enshrined under Article 25 of the constitution. Besides, the National Testing Agency (NTA) mandates no dress code for students appearing in exams. The protocol only say that students wearing hijab will have to undergo a security check, which Umaiyah was ready to comply with. NTA director-general Vineet Joshi said that the agency was “sensitive to matters of faith and gender”.

According to India Today, the Delhi Minorities Commission (DMC) issued a notice to the UGC secretary after the incident saying, “It is a clear case of discrimination against a religious minority and an attempt to keep it away from the national mainstream.”

Also read: A Life-Changing Rickshaw Ride With a Woman in a Blue Headscarf

“This practice has no legal or constitutional basis. The Kerala High Court has clearly allowed Muslim women to appear in exams and test while in hijab (wearing scarf and full sleeves),” the DMC said.

“The DMC has asked the UGC secretary why the discrimination was allowed and how do they propose to undo the injustice done to the Muslim women prevented from appearing in the NET exam while in hijab and what steps are being taken to prevent the repetition of this injustice in future,” senior DMC official said.

What does a hijab mean to muslim women?

Ever since the incident came to fore, many people said that Umaiyah should have removed her hijab during the examination but they are all missing the bottom line here. They do not understand that their insensitive statements are hurting the minority sentiment. It looks like for them, minority is just an anomaly. It is really disappointing that the officials refused to understand Umaiyah’s standpoint which just questioned the injustice unleashed upon her.

This issue isn’t just confined to religion, it rather comes from a place of inherent misunderstanding and ignorance. Those who asked Umaiyah to take off her hijab so easily, did not understand how it was intermingled with her identity and was not a mere external piece of clothing.

The veil in Islam was introduced 1400 years ago and it has acquired different meanings with time. The role of hijab in today’s world and in the lives of Muslim women is different from what it was 1400 years ago. Today, it acts as a symbol of expression. When Turkey, in its attempt to quickly modernise, had banned the headscarf from being worn in public institutions, women voluntarily sported headscarves and asked to lift the ban.

Wearing the hijab in the face of Islamophobia is the Islamic feminists’ act of defiance. Once the choice (choice is an important noun here) to adorn the hijab is made, it becomes an inseparable part of their identity. Those who chose to adorn it, do so with the utmost commitment and those who don’t cannot understand what goes into making that sort of commitment.

Similar case in past

Along similar lines, another student, Safina Khan Soudagar in Goa was barred from entering the NET exam hall on December 18, 2018. According to India Today, she claimed that the rules on the website concerned did not say anything about dress code or hijab.

The Directorate of higher education in Panaji interjected by saying, “Not just hijab, even mangalsutra or any other accessory is not allowed in the examination centre to prevent cheating and also from the security point of view.”

“There are stringent guidelines by the UGC to ensure that the examination is held in a very transparent manner and the officials were only following it,” he added.

Also read: I Am a Muslim. Here’s Why I Wear My Religion on My Sleeve

Umaiyah however believes that only the ignorant staff present at the institute is to be held responsible for making her feel humiliated, not the communal sentiment.

“I can’t judge what was on their minds while they asked me to remove my hijab but it’s very disappointing to see that they were not even ready to go ahead with the security check. I have mailed the Minority commission, UGC and MHRD a written complaint and I would be happy if they respond soon to serve justice to me.”

It is now upto the UGC to take responsibility for the incident and work towards undoing the damage that these students had to face due to the ignorance of the on-duty staff at the respective examination centres.

Maria Uzma Ansari is a student at Jamia Millia Islamia.