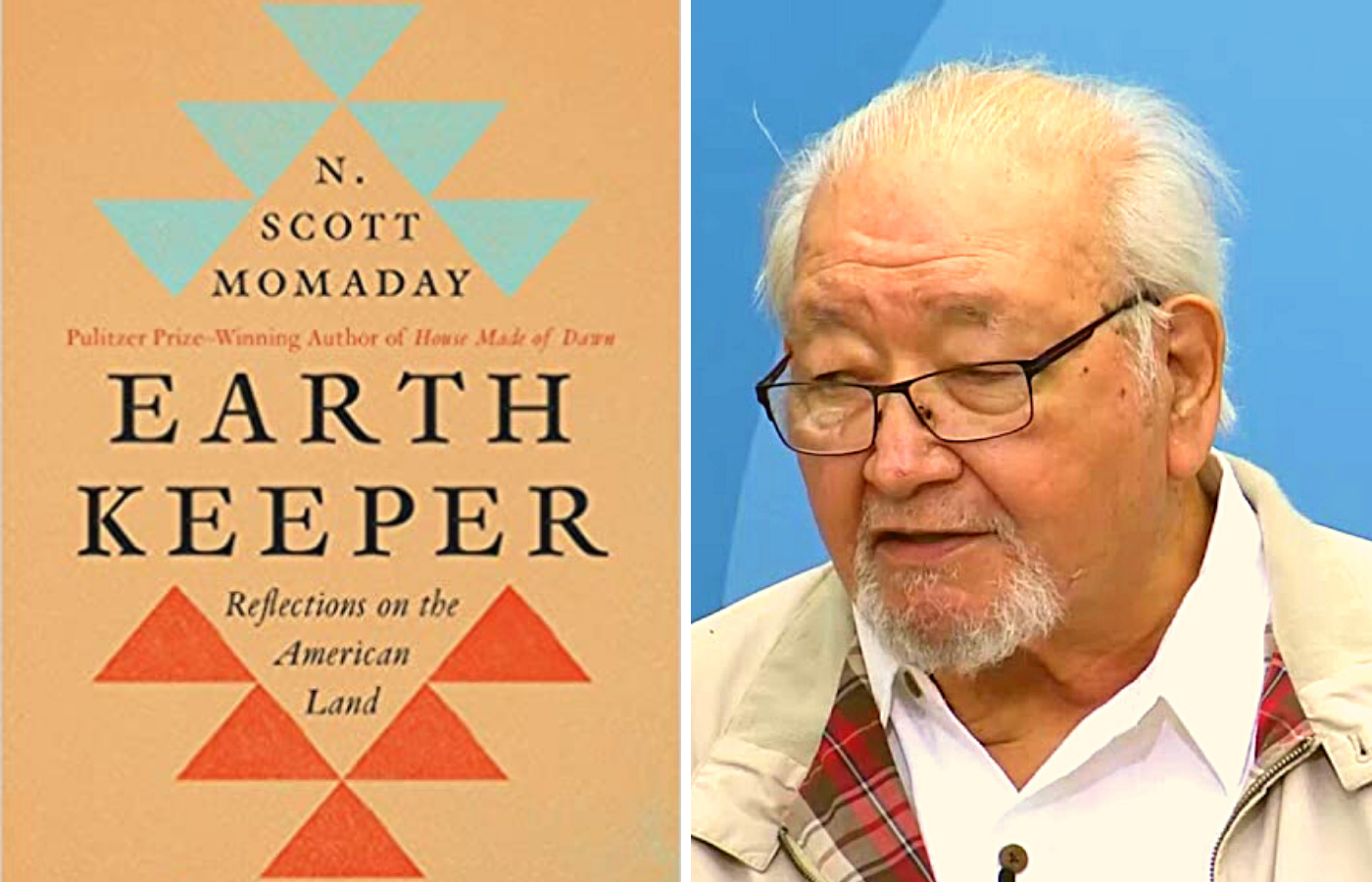 N. Scott Momaday, born in Oklahoma in 1934, is a poet, Pulitzer Prize-winning novelist, playwright, painter, storyteller, and former professor of English and American literature. He grew up on an ‘Indian reservation’ as a member of the Kiowa tribe, and his works celebrate Native American culture and the oral tradition. Momaday won the Pulitzer Prize for his 1968 novel House Made of Dawn, and has been awarded 21 honorary doctorate degrees by American and European universities. He lives in New Mexico.

Momaday’s most recent publication, Earth Keeper: Reflections on the American Land, came out in November 2020. It is a collection of untitled prose-style poems written in free verse, divided into two sections: ‘Dawn’ – which contains an exposition of the Kiowa tribe’s ancient beliefs and traditions, and ‘Dusk’ – which delivers a seething critique of what is the modern way of life. A poignant and powerful meditation on the Native American philosophy of life, the collection delves into the cultural significance of the symbiotic relationship between the human species and our environment, the breakdown of that relationship, and the great loss which has resulted from this breakdown.

While the overall tone in this collection is that of lament, Momaday first takes us through the beauty and depth of what has been at stake, and this approach colours our collective grief with an uneasy sense of urgency. He writes about the pitfalls of industrialisation, modernity and commercialism, by showing us how the indigenous Native American tradition of communion with the earth – the keeping, taking care, tending, being attentive and present, and accepting to all forms of life, whether animate or inanimate – has been severed from its practitioners and is now slowly being pushed into the realm of the forgotten. As in the poem below,

We humans must revere the earth, for it is our
well-being. Always the earth grants us what we
need. If we treat the earth with kindness, it will
treat us kindly. If we give our belief to the earth, it
will believe in us. There is no better blessing than to
be believed in. There are those who believe that the
earth is dead. They are deceived. The earth is alive,
and it is possessed of spirit. Consider the holy tree. It
can be allowed to thirst. It can be cut down. Worst of
all, it can be denied our faith in it, our belief. But if
we speak to it, if we pray, it will thrive.

the emphasis on faith, prayer, and reverence – not as doctrine, but in practice and service – is truly refreshing in a world where each crisis is in turn a crisis of faith in the inherent sacredness and divinity of everything. The entire collection is, in fact, presented in the form of a prayer book in which each prose poem appears as a succinct block of text on one side of the page, while the other side is left empty. Even the collection’s layout and design are very well-thought out, as they serve to direct our minds towards the gifts of attention by subtly reeling our focus in towards what lies right in front of us.

The absence of titles for individual poems suggests that there is no singular, central idea around which a poem is constructed, which holds greater weight over other ideas presented in the poem, or for that matter, the collection. Each poem and each idea within it is as equally important as the other.

Towards the end of the collection, Momaday describes ‘earth keepers’ as those who are able to be present to the earth, witness and celebrate the earth’s life in its many manifestations in nature:

In order to ‘keep the earth’, not only must we open ourselves to its magic but also immerse ourselves in that spirit of nature from which we have become so distant. We must strive for that balance – which is essential for the earth’s survival and for ours – by participating in the earth’s magic with our own movement and stillness, tending and taking, looking and perceiving, as and when required of us.

What spoke to me the most about this collection is the candour and universality of its wisdom. It doesn’t matter whether you are an environmentalist, a climate activist, an academic, a non-academic, an anti-academic, all or neither of these (or anything else entirely) – this collection has a lot that will take your breath away in a welcome way.

Mehvish Siddiqui studied English literature at Hindu College, Delhi and the University of Oxford. She works with poems, and occasionally writes her own.