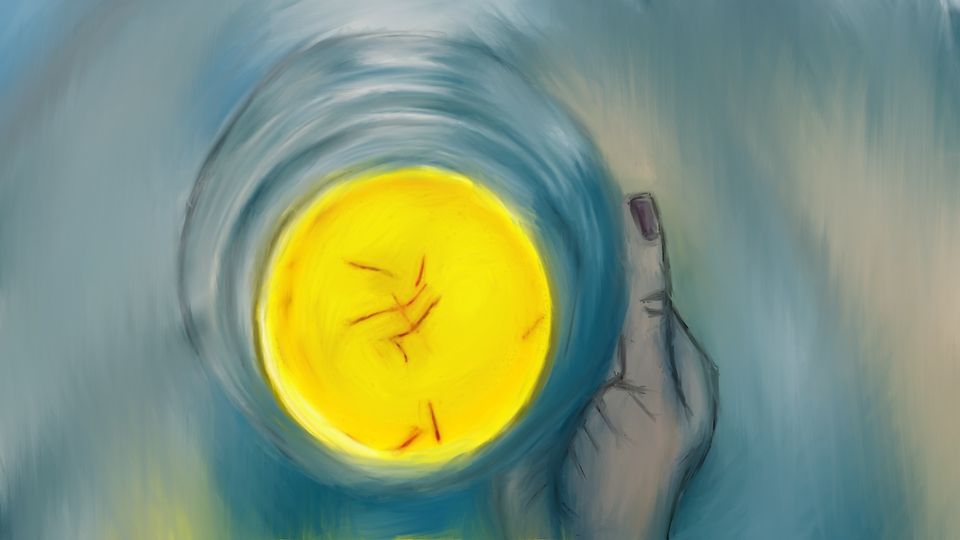 I stare down into the depths of my cup,
The few strands of saffron that mama bought swim here
Exquisite, expensive strands, melding with my milk.

As I take a sip, I marvel at the subtle, floral taste,
And I think, “So this is what saffron is really like?”
Because as I sit here languidly on my terrace,
Drinking in the world,
It reeks of saffron,
A nauseating and stifling smell.

I remember my first introduction to saffron,
I was seated in a classroom in the third standard:
We were being taught a lesson on ‘patriotism’
And the fact that the colour on our Indian flag is not orange
But saffron, which symbolises grit, determination and courage.
A precocious child piped up saying, “Isn’t saffron a spice?”
Indeed, we were told, it is the most expensive spice on earth.
I was sufficiently intrigued by the concept of this saffron
That I nearly missed part of the lesson
Where we were taught about the green of growth
And how it coexists with saffron on the flag.

I realise that many people seemed to have missed this part of the lesson.
As saffron flames now lick at the verdant vegetation of our heartland
A ravaging wildfire,
Like a thoughtless, raging mob,
Overcome by passion,
Ignoring the fact that they had lived side by side with this forest for years.
They had never seen them as different, or green
But the saffron blood of the mob boils,
Inciting fury,
As they torch, and burn and kill.

Nowadays I see saffron flags everywhere,
In my neighbourhood, near my school,
This inundation is not easy on the eyes,
It reminds me of the bright red cloth that a matador would wave
In front of a bull, creating an aggression in me that I didn’t even know existed.
This saffron sense of urgency will follow you wherever you go
In the deafening rhetoric of self-righteous news anchors
Flashing banners on Twitter
The thump of fists on coffee tables that urge us to go to war.

As these precious strands of saffron
Are hurled around in the name of unity and nationalism
I set my cup down with a sudden distate.
Because I remember being taught that saffron
When consumed in excess, is poisonous.