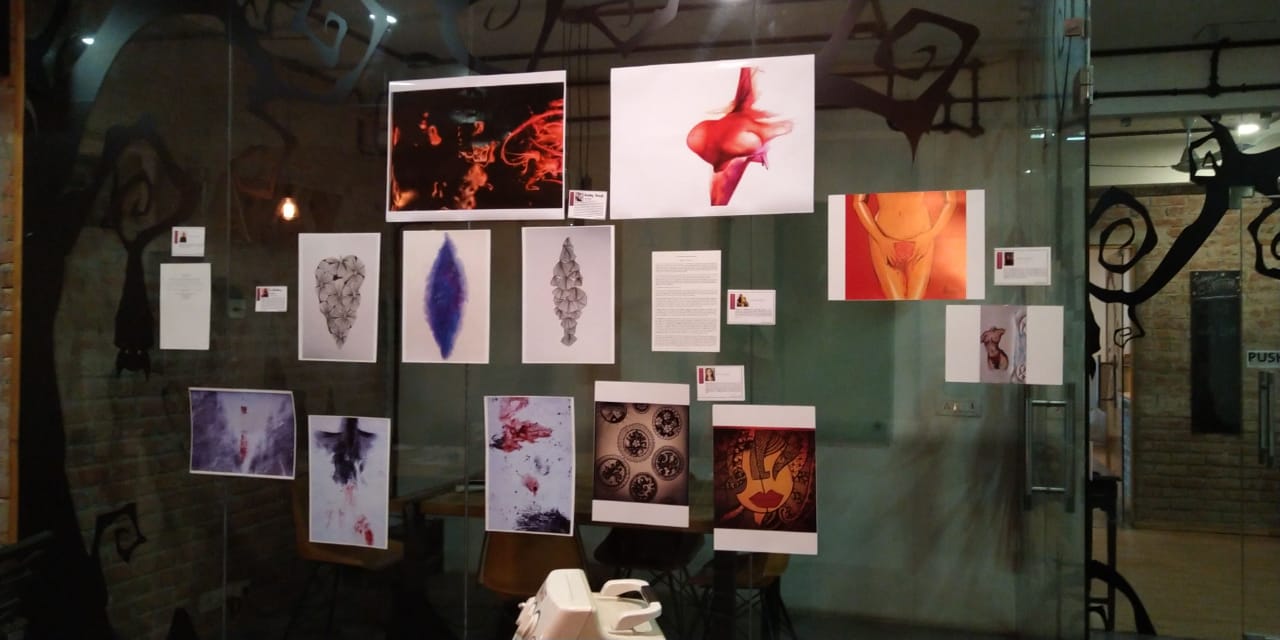 The month of May hosts World Menstrual Hygiene Day on the 28th every year. The fifth month represents the five days of period, while 28 denotes the average number of days a menstrual cycle lasts.

To mark and celebrate the same, Boondh exhibited The Crimson Wave (TCW) – a non-commercial art initiative. This was India’s first traveling art exhibition, seeking to initiate an open conversation about menstruation, otherwise a hush-hush topic, by combining art with activism.

“Art demands deep thought, strong emotion, significant time, varying perspective and sincere effort. It is a powerful tool for self-expression and can be used as a social commentary, enabling conversation”, said Sonal Jain, co-founder of Boondh.

TCW, screening of The Moon Inside You. Credit: Riya Roy.

The central idea of the project is to curate artwork about periods, the myths surrounding menstruation and different representations of female biology, from a diverse range of artists across the world. It is titled The Crimson Wave after a common euphemism used to describe one’s period. The first edition of TCW was symbolically launched on the May 28, 2017.

The submitted artwork was exhibited in Chennai, Bangalore and Goa, and was displayed in areas frequented by the public. It included contributions from well-known artists like Jen Lewis from Michigan, Lyla Freechild from Jaipur, Ramanjot Chana from Germany, and Srividya from Bangalore, who worked with the medium of menstrual blood, providing moving pieces to the Erythrean Project within The Crimson Wave.

Devika from Delhi, whose ‘Vaginal Warrior’ – a superhero who faces rashes, infections, bad sexual encounters and childbirth – was a part of TCW said, “Vaginas have always had a special place in my art. However, this time I chose to personify the body part and give it an identity, breath, and a voice. The Vaginal Warrior came out of my need to embrace the organ that connects menstruation to the outside world.”

Vidhi Bassi’s ‘Flower Power’, shows a woman holding a bouquet and bleeding. The flowers that we see flowing through the blood signify the breaking of the myth that menstrual blood is impure or gross.

For this World Menstrual Hygiene Day, Boondh focused on creating a safe space in Delhi for artists and non-artists alike, to gather and share their experiences of and perspectives on menstruation. The show saw menstruators, young teenagers, non-menstruators, mothers of children who are now adults, come together and share their thoughts through artwork, intimate poetry, stand up, music, readings and more.

On the May 19, the exhibition screened The Moon Inside You, a documentary that explores the cultural stigmas and physical realities that shape how women and men experience menstruation. “It [The Moon Inside You] brought a wave of thoughts, emotions, and perspectives in me,” exclaims Jharna, a law student and an advocate of sustainable menstruation and period positivity.

According to Sanjana, a BMM student, the movie was a journey to what goes inside our bodies during periods. She said, “ever since watching it, I have treated myself gently and with respect.”

After the screening, a healthy discussion followed, bringing in various opinions from all the people in the room. It was agreed, unanimously, that there is a need for more research, data, awareness and inclusive behaviour around menstruation to promote menstrual hygiene.

On the May 26, Boondh organised its second event for this year’s TCW – an open mic.

Twenty-three artists from the city gathered at A Little Anarchy Films for a two-hour intimate evening of poetry, stand up and music. “The audience included a mix of binary and non-binary people, thus creating a safe space for us to openly talk about menstruation,” said Meghna Prakash, an artist who also performed her poem, ‘Brown Girl, In A White Dress’, at the event. “A woman celebrating her body is a wild but strong form of protest. I hope with this event we can teach young girls to own their bodies, one RED revolution at a time,” she added.

Ankita, a PhD scholar from DU and a menstrual researcher working on menstrual etiquette in India, who performed her poem, ‘Metro Ka Ladies Coach’, said she was pleasantly surprised to find such a large audience come together to openly talk, sing and slam about a topic that is still referred to in euphemisms.

Boondh is a social enterprise creating an equitable and healthy menstruating world. They work in promoting and propagating healthier and sustainable menstrual health practices across socio-economic strata, inclusive and sensitive to trans and disabled populations, inculcating a culture of period and body positivity.

They design and deliver menstrual interventions and offer affordable reusable period products in economically disadvantaged communities across India. In the course of last three years, they have engaged with over 16,000 menstruators, helped more than 8,000 people transition to sustainable products and eliminated 960,000 kg of plastic ending up in landfills.