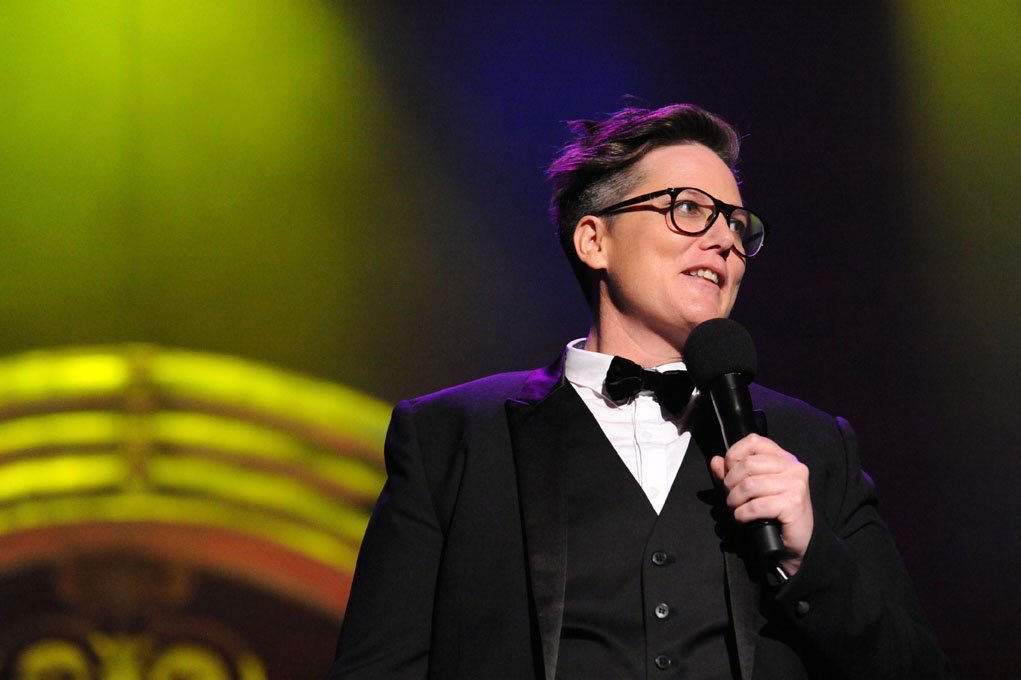 Hannah Gadsby’s new show, Douglas, is not earth-shattering the way Nanette was; but then, nothing could be.

Many of us watched with fascination as Gadsby’s tenth solo show, Nanette, took her from a local niche market in queer comedy to international superstardom, skipping quite a few steps in between.

The comedian had intended Nanette to be her farewell show, and by all accounts was not prepared for what followed: major awards at international comedy festivals, a world tour, a Netflix special, appearing at the Emmys, moving to Los Angeles, and receiving endorsements from the likes of Ellen Page, Roxane Gay, and Monica Lewinsky. It was well deserved, but also disconcertingly rapid.

Gadsby was diagnosed with autism in the years leading up to Nanette. In fact, she tells us in Douglas that the show came directly out of that diagnosis: “I found a name for how I experienced the world.” Gadsby’s comedic voice changed with Nanette; there, she spoke with the newfound confidence of someone who has come to understand themselves, someone who no longer seeks to belong to clubs that wouldn’t have them.

How Gadsby weathered being thrust into Hollywood is a good question, but Douglas reads like a direct response to that experience, and an act of considered self-care.

As a comedy show, Douglas is in some ways deliberately very normal. It is funny throughout, it has those rehearsed non-sequiturs that move the narration forward, and its progression is linear rather than exponential in the way of Nanette. Gadsby takes time to talk about her last show, her last tour, what she has learned – all that ordinary stuff local comedians do at every Melbourne Comedy Festival.

These are no doubt premeditated choices. Gadsby has spoken at length about not wanting to be seen as a non-funny comedian or to quit comedy altogether (even though quitting was the premise of Nanette). After all, Nanette’s great success made her think that her best move would be to showcase her comedic craft “instead of trying to learn a whole new skill set”.

Also read: An Indian Woman’s Story, Or a Tribute to Hannah Gadsby

While performing Douglas, Gadsby talks about the emotional toll of spending two years touring a show about trauma. She adds: “That was only my fault. I started that conversation.” Formally, if Douglas is about anything, it is about recreating comedy as Gadsby’s safe, comfortable space.

Douglas begins with phones being taken away from audience members and locked into magnetic pouches. Having spent considerable time introducing the sensory sensitivity associated with autism, Gadsby later explains that the sudden flashing of light in the audience is very distracting.

She notes that she now has to pay people to touch her, despite the discomfort it causes her: a stylist, a tailor, a hairdresser. She describes the “meltdown” that autistic people experience with complete sensory overload, often dismissed as a “tantrum”, but in reality anything but.

Gadsby also notes the intentional medicalisation of women’s emotional range: “Sure, I may nibble on a bit of dark chocolate on a full moon. But I’ve never wanted to punch a door!” She points out that expectations of women to be the emotional workhorses of social situations are so high, and autistic women learn to camouflage their symptoms to such a degree, that autism in women and girls was once thought to be an impossibility.

Throughout the show she narrates her life, lived in the consequences of these misconceptions and misdiagnoses. Again and again she returns to a lament: “This is because we live in a world where everything is named by men.”

Nanette was a terrifically crafted piece of standup comedy, as well as a timely reckoning with patriarchy, sexual violence and homophobia, just as #MeToo was getting going. It was always going to be a very hard act to follow.

Douglas is a deftly executed, brilliant comedy about women and autism – speaking about an often painfully experienced difference without self-deprecation or condescension. I hope it finds its audience.