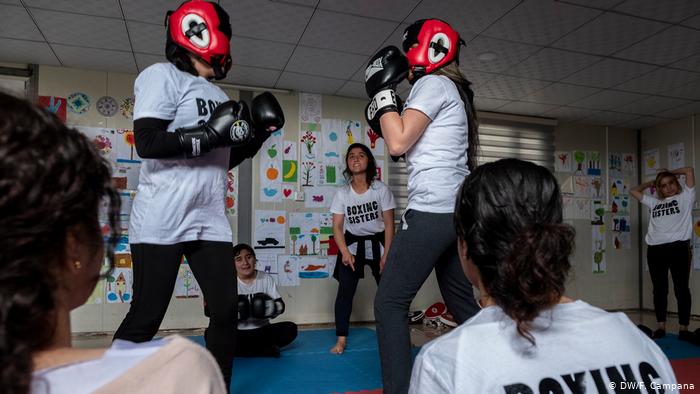 On their long journey to recovery, some of the Yazidi women and girls who survived genocide and sexual slavery at the hands of “Islamic State” have taken up boxing to help heal and rebuild their self-confidence.

The “Boxing Sisters” program was launched in late 2018 by Lotus Flower, a British NGO in Iraqi Kurdistan. Five days a week Yazidi women and girls gather for a two-hour training session in the Rwanga IDP camp. Many of these women were subjected to physical, emotional and sexual violence while held captive by the “Islamic State” (IS) before arriving at the camp. Image credit: DW/@ F. Campana.

Boxing was not the first physical activity that Lotus Flower brought to the women and girls in Rwanga camp, but it has been the most popular by far. “We thought that it would be a really good way for the women to be empowered physically as well as internally,” says Vian Ahmed, the group’s regional director. Image credit: DW/@F. Campana.

“Many times when I do boxing, I remember the moments I had pain and depression inside myself and I try to get rid of it through boxing,” says Husna Said Yusef. She and her family have been at Rwanga camp since IS attacked her village in Sinjar in 2014. When her family learned that IS was approaching, they fled to the mountains and hid for a week, until they were able to make their way to the camp. Image credit: DW/@F. Campana.

Said Yusef, who is 18, has always loved sports. From a young age she would practice weightlifting with her uncle in their makeshift gym at home, but boxing, she says, is something special. And even though she would like to become a doctor one day, “at the same time, I don’t ever want to leave boxing,” she says.. Image credit: DW/@F. Campana.

Waiting for the fight

In the beginning, not many families in the camp were willing to let their girls attend boxing class, but after several weeks of Lotus Flower staff members going house-to-house explaining the benefits of this physical activity, things began to change. “We didn’t believe that it would be something so welcomed in this short period of time,” Vian Ahmed says. Image credit; DW/@F. Campanna.

In April, some of the women in the boxing classes were themselves trained as coaches so that they could go teach boxing to women and girls in other camps in the area. Husna Said Yusef started teaching in her own camp. Image credit: DW/@F. Campanna.

When the young women aren’t in boxing class, they can attend English language classes or “Storytelling Sisters,” a visual storytelling workshop. Some go to high school. The attack on their villages in 2014 by the “Islamic State” group had put a stop to their studies. They now have the chance to resume them. Image credit: DW/F. Campanna.

This article was originally published on Deutsche Welle. Read the original article here.