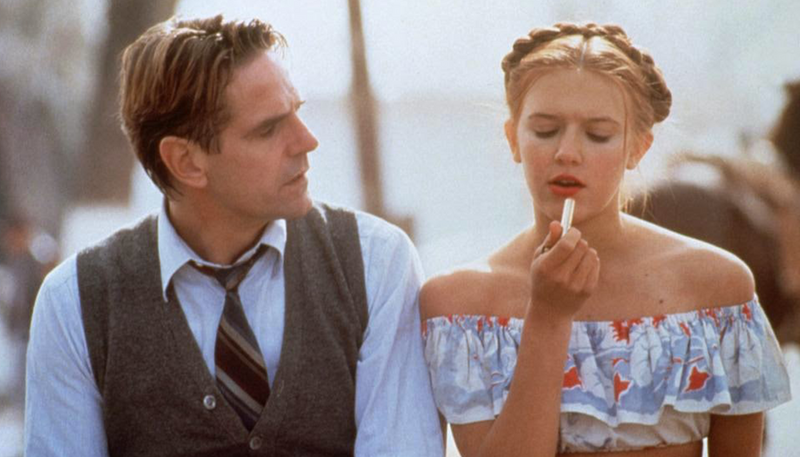 There is a moment in Adrian Lyne’s film Lolita (1997) that is burned onto my memory.

I was probably around 12, up late, watching it on terrestrial television. Lolita and her guardian, lover or captor have been moving between seedy motels, the romantic aesthetics waning until they wrestle on distressed sheets in a darkened room. The bed is covered with coins. Humbert has discovered Lolita has been stashing away the money he has ‘become accustomed’ to paying her, and he suddenly fears she is saving it in order to leave him, something that has not yet occurred to him. The shots are intimate, violent and jarring, ruptured by a later scene in which Lolita shouts: “I earned that money!” We realise that Lolita has learned that sexual acts have monetary value.

My own realisation came through different circumstances. Like Humbert, some of the men who exploited my vulnerability were probably unconscious of the role they played in the power struggle between an impoverished young woman and the men who could offer her resources. Humbert is exploitative. He also believes in the love between himself and Lolita. To him, the commodity-exchange or transactional aspect of their relationship is the perversion. Its articulation shocks him, the truth of it (or the mere fact that Lolita understands it herself) threatens him so much that he strikes her across the face.

He immediately regrets it and submits to her blows, insisting that she be silent.

Humbert’s violence, his refusal to accept the whore, stands for the ages. From religious fundamentalists to certain kinds of radical feminists, a lot of different types of people agree that work is respectable and even noble, and that sex work is degraded and criminal. In truth, sometimes sex work is degrading, sometimes it isn’t. Sometimes it is illegal, often it’s legally complex; but why is sex work not understood to be work?

I understand that sex work is work because it is the work I do. I watched Lolita long before I became a sex worker, but not long before I began exchanging sex for things: something to eat, something to smoke, a place to sleep, a job opportunity. I identified with Lolita; I also knew that I sympathised with Humbert.

This is Vladimir Nabokov’s talent after all, to have us still torn apart well into the 21st century. I see the monstrosity of the man who abducts Lolita, but I am more interested in Lolita the sex worker. I read the book (originally published in 1955) when I was 14 and it made me uncomfortable, but I’ve always been comfortable with being made uncomfortable.

The novel I read was about a young girl whose unfortunate circumstances forced her to grow up too fast, as they say; who was resourceful as much as she was a victim. Criticism of Lolita often demands that we make binary decisions: is Lolita a victim or a whore? Is Humbert tragic or a monster? Why can’t both be true? After all, I grew up in a world that insisted I occupy a sexualised body, and then punished me for doing so without shame.

The first time I noticed a grown man’s sexual interest in me, I was 11 years old. Something awoke in me that day, and I learned to flirt. I spent the next few years knowing that there was something I could gain in return if I stopped blushing and accepted my position as a sexualised body. I existed on the outskirts of abject poverty, and every prolonged glance, every catcall, became an opportunity.

I became conscious of a world of men eager to provide money, comfort and an escape route in exchange for what I had: beauty and youth. Perhaps if I’d had a father, a stable home, the recognition of that first flirtation would have stopped there, but it didn’t. Circumstances made me a young woman with a firm grasp on the fact that my sexual appeal could get me what I needed to survive. I also had my own sexual desires in abundance, only twofold: once as desire, twice as currency.

Sex-positive feminism helped to guard me against the most corrosive shame, but I’m not ignorant of the structural reasons that led me to trade sex in the first place. In an ideal world, I wouldn’t have to do sex work, I wouldn’t have to do any work I didn’t really want to do. But we are a long way from Eden. It is perfectly consistent to be deeply critical of the economic and gender inequalities that give rise to sex work, and still advocate for sex workers. The way to deal with cognitive dissonance is to tilt your head a little.

In 2018, the US actress Ashley Judd, along with a number of wealthy celebrities, aligned herself with the movement to criminalise sex work. It’s an action that flouts the views of the overwhelming majority of current sex workers, Amnesty International and the World Health Organization. Judd made a statement on Facebook that is representative of a kind of feminism that generally excludes working-class women: ‘one cannot consent to one’s exploitation’. The statement equates consent with satisfaction, and exploitation with something like ‘less than I’m worth’.

The reality, under capitalism, is that most of us consent to our own exploitation in order to survive. This is the nature of labour under capitalism. A preoccupation with how women use their own bodies should not blind us to the ways that sex work is like other work.

It is important to distinguish (sex) work from slavery, and what we do for pleasure from what we do to survive. We should understand that these things can intersect sometimes without being the same. This insight enables us to see the demands of current sex workers (generally to be left alone to work in communities with no regulatory or carceral intervention) as righteous and urgent, while at the same time acknowledging that it is important to find effective ways to tackle sex trafficking.

In her book Playing the Whore (2014), Melissa Gira Grant oﬀers an excellent analysis of the ways in which the fight by 20th-century feminists to have the boundaries between the home and not-home dissolved, with both recognised as workplaces, set the stage for myriad labour-rights eﬀorts. Such was the move by feminists to have their labour – largely resigned to the home and disregarded – understood as legitimate work.

However, I think that it is the middle-class consciousness of liberal feminism that excluded sex work from its platform. After all, wealthier women didn’t need to do sex work as such; they operated within the state-sanctioned transactional boundaries of marriage. The dissatisfaction of the 20th-century housewife was codified as a struggle for liberty and independence as an addition to subsidised material existence, making a feminist discourse on work less about what one has to do, and more about what one wants to do.

A distinction within women’s work emerged: if you don’t enjoy having sex with your husband, it’s just a problem with the marriage. If you don’t enjoy sex with a client, it’s because you can’t consent to your own exploitation. It is a binary view of sex and consent, work and not-work, when the reality is somewhat murkier. It is a stubborn blindness to the complexity of human relations, and maybe of human psychology itself, descending from the viscera-obsessed, radical absolutisms of Andrea Dworkin.

The housewife who married for money and then fakes orgasms, the single mother who has sex with a man she doesn’t really like because he’s oﬀering her some respite: where are the delineations between consent and exploitation, sex and duty?

The first time I traded sex for material gain, I had some choices, but they were limited. I chose to be exploited by the man with the resources I needed, choosing his house over homelessness. Lolita was a child, and she was exploited, but she was also conscious of the function of her body in a patriarchal economy. Philosophically speaking, most of us do indeed consent to our own exploitation.

Juno Mac and Molly Smith provide a remarkable analysis in their book Revolting Prostitutes (2018). The voices of those in their book should not be ignored; more than most, we know that the exchanges of sexual politics are complex, that people often have mixed motives and, perhaps most of all, that the global economy is failing people. We need to reconsider our relationships to liberty, consent, enjoyment and work.

Tamara MacLeod is the pseudonym of a freelance writer, sex worker and activist based in England. Her Twitter is @HiTamaraMacLeod