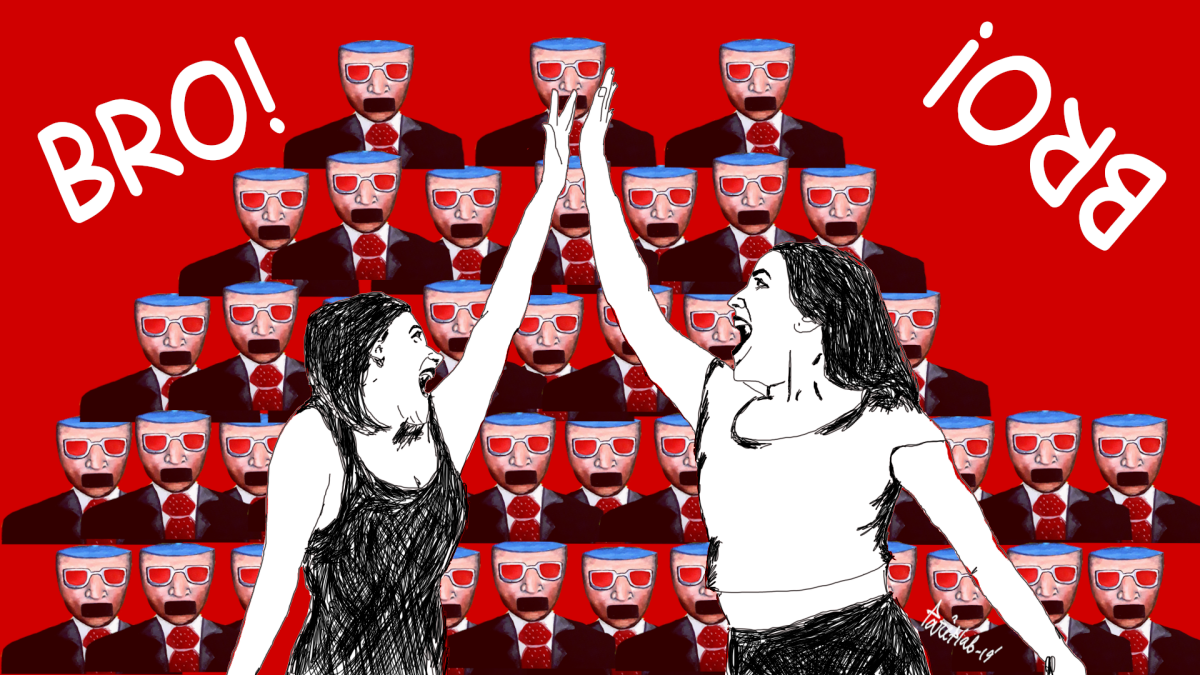 Recently, I was in conversation with a close female friend when she stopped me mid-sentence. ‘Did you just call me bro?’ she asked, incredulously. She was right – without even realising it, I had in fact addressed her as ‘bro.’ She was appalled, I was ashamed and couldn’t stop thinking about it.

This wasn’t the first time I had used the word for a female friend (or any friend in fact). The ease with which the word rolled off the tongue suggested a familiarity that embarrassed me. I discovered myself guilty of perpetuating a toxic fraternity culture that I otherwise routinely derided.

How did I get here?

To assess how deeply this term had woven itself to my everyday language, I turned to my phone.

I typed the word into my text history and found that I had addressed – and been addressed by – my female friends as ‘bro’ 120 times in recent months. And that was only via text. Add to it the number of times I must have employed the term in offline conversation, and the count (along with my shame) would grow exponentially.

However, as I despaired, a whole previously-invisible world revealed itself to me.

It seemed they were everywhere, these women who were okay with being ‘bros’ and not ‘sisters’ to their women friends – on Instagram and Facebook, captioning their pictures with ‘Bros before hoes’; on streets and in movie halls, expressing excitement with ‘Brooo!’; diffusing confrontational situations with the arm’s-length even-toned ‘Chill, bro.’; lamenting unfortunate situations with a ‘Bro…’; introductions made at pubs and parties as ‘Guys, meet my bro…’

So it turned out that I was not the only one. As far as I could see, ‘bro’ had somehow become a term of address and endearm ent in my social circles. The women I speak of were independent, feminist women. They recognised and unshrinkingly called out gendered double standards. Present to these women a posturing ‘dudebro’, and they would tear holes in his engorged sense of masculinity.

So, at a time when toxic bro culture was still deeply central to the word ‘bro’, how had I, and women like these come to embrace addressing other women as ‘bro’?

The first time I heard anyone addressing another as ‘bro’, I was 16 and fresh out of small-town Assam. I found cool in the douchebaggery of Barney Stinson, nodding allegiance every time he asserted “bros before hoes.” Hearing the word used in its Stinsonesque context in genuine conversation felt ridiculous – it was performative, like simulating a sitcom situation in real life. However, soon I was a student at Delhi University, callously calling my female friends ‘bro’, and feeling rather smug about it.

The college I attended in Delhi was all-women’s college, known for being extremely feminist. There we raged against patriarchy and our gendered society, and yet one couldn’t step a metre in any direction without overhearing a ‘Bro!’ In this feminist space, we built meaningful, empowering sisterhoods, yet diluted our closeness with a casual side of ‘bro’.

Maybe in the beginning, ‘bro’ was simply a marker of us being modern women. We were determined not to be the submissive, silent women our mothers had been. When our male friends called each other ‘bro’, it showed that their friendship was free of unnecessary emotionality. After a lifetime of seeing women stereotyped as over-emotional and hysterically sentimental, I believed that my using ‘bro’ showed me as disproving that stereotype.

While my 2019 feminism can recognise this as internalised misogyny, my 2011 self did not see it that way. Maybe by adopting the word ‘bro’, I did want to be one of the boys. It offered me the pretence of equality and at that point in time, even the pretence sufficed. Unfortunately, aping mannerisms of the privileged do not automatically afford one the same privileges. But that’s how I, and many other women like me, got into the habit of saying ‘bro’ – a habit they never quite got out of.

Debatably, ‘bro’ is the most common gendered term of casual address used by women for women. Until the 20th Century, the word was merely an abbreviation of the word ‘brother’, implying a male sibling, a religious title in Church, or a way for African-American men to express solidarity with each other. However, by the 2000s, the word grew into a form of direct address, where one man calling another man ‘bro’ suggested camaraderie or friendship separate from familial implications.

It soon grew to be associated with a certain type of young American man – the ‘bro’ the we know today. This ‘bro’ is a typical guy’s guy, often belonging to a fraternity and representing the homophobic and misogynistic attitude of the same. He is affluent, almost always white and unaware of his privilege – a flag-bearer of modern toxic masculinity.

And thus, many bros in close proximity birthed ‘bro culture’.

The Indian upper-middle and upper class is chock-full of Indian bros too. Replace ‘white’ in the above description with ‘savarna’, and voila! – we have the Indian bro. The Indian bro more often than not enjoys the entitlement of the affluent, caste-privileged straight man. He is casually racist, casteist and sexist, and revels in the micro-aggressions of his irreverence. He believes himself to be ‘woke’, yet never questions his privilege. A group of bros is a macro-aggression.

Women addressing women using ‘bro’ would be no big deal if we lived at a time where the world was free of gender, race and class injustice. In an equal world, the use of the term ‘bro’ would not hold any problematic implications, but that’s not the world we live in today. Bro culture prominently thrives around us – be it in the fraternity culture of corporates, advertising agencies, tech companies, the independent music scene, meme culture, comic book culture, gaming culture, stoner culture, law, politics, etc.

In its encouragement of institutionalised sexism and male supremacy, it creates anti-feminist spaces. And by normalising the usage of ‘bro’ in our language politics, we make ourselves complicit in perpetuating a subculture that continues to alienate women and gay folx.

Also read: Can Women Afford To Be Degenerate?

When two men address each other as ‘bro’, it suggests that there is a camaraderie between them that is crucially non-intimate. They can be beer buddies, gym buddies, music buddies and even work buddies, but not emotionality buddies. This is the same tenet that birthed the immensely popular and homophobic bro mantra of ‘no homo’. The patriarchal pressure upon male-male relationships to not appear ‘gay’ is at the root of bros’ typical aversion to displays of genuine emotions between them. Thus, the bro might ‘crack a cold one with the boys’ but will balk at the idea of sharing with them his fears, hurts and anxieties.

‘Bro’ is not equivalent to brother or best friend, thanks to the versatile functions it serves. Uttered by a woman, ‘bro’ does not equate to ‘sister’ either, lacking in the gravity or faithfulness characteristic to a sisterhood.

As antithetical to bro culture, female friendships emphasise emotional closeness between women as an essential characteristic.

The central tenet of feminism emphasises the idea of sisterhood, of women supporting women in the face of centuries-old patriarchal conditioning that pitted them against each other. While bro culture holds at arm’s length, sisterhood embraces. In contrast with the toxic masculinity of bro culture, the tender intimacy of female friendship is a symbol of radical softness.

And therein lies my problem with women calling each other ‘bro’: for us who have toiled to unlearn our silence and survive our self-hatred, is it fair that that we weave ourselves into a narrative of more exclusion? When we have fought our way to standing up for our women, can we afford to barter our radical intimacy for some mere apathetic camaraderie?

Priyadarshini Gogoi is a poet, writer, and editor who currently resides in Bangalore. Her writing revolves around themes of intimacy and vulnerability as a way of engaging with her own personhood. She cries quite easily, mostly from the stress of writing and then from having to read it afterwards.