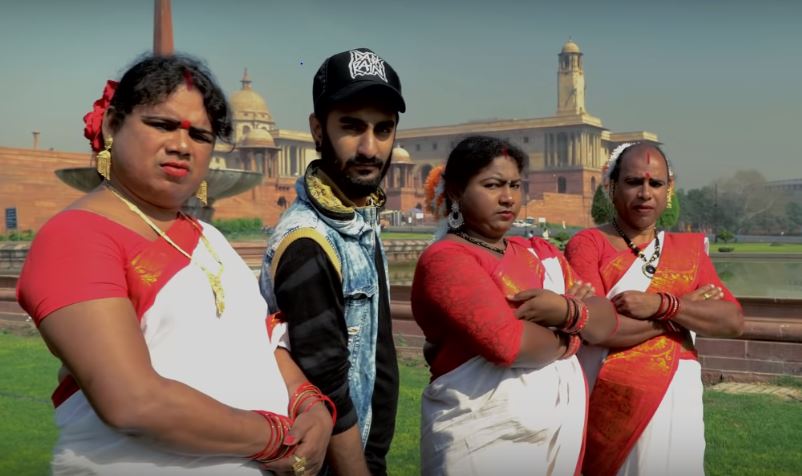 However, unlike other rallies, the stage here is empty, chairs unoccupied and no politicians can be seen blurting false promises ahead of elections.

In award winning film-maker Shankhjeet De’s new rap video Hatt Salaa, transgender women from Odisha’s Balangir district disdainfully reject and mock such political rallies where promises on employment are as meaningless and hollow as an empty stage with neither the politician, nor the audience.

The rap, here, is a dialogue between three transgender women (Madhu, Sarita and Nandini) and a disgruntled young man (Rapper RcR) – representing the youth – who has degrees and diplomas but not a job.

“Fikar me hoon mera kal kahaan hai… kyu fail ho jaati hai meri saari yojana” (I’m worried about my future, why do my plans always fail), raps the young man who gets chided by his parents for being jobless.

And the transgender woman spurts rapid word-play with the word ‘yojana’. They blame the policy makers who only give “yojana pe yojana (schemes upon schemes)” but never solve the problem.

“yojana upar yojana, dikhaate hain sirf sapna, uska kya fayda? (one scheme after the other, they only show us pointless dreams.)”

The rappers, however, do not target any particular political party and reject all of them instead. They climb up the stage and tear apart all the posters of different political parties (depicted as “A”, “B”, “C” and “D”) while shouting, ” Sab bakbak bekaar (all these promises are useless.)”

‘Youth is not lazy’

The director, who conceptualised the idea, believes that every regime has been apathetic towards the youth and has mostly held the them responsible for all the problems.

“There is a misconception that youth is lazy and directionless but I refuse to believe so. They have degrees, skills and all the passion, but the job opportunities are not conducive to their educational qualifications,” he says. “It is the system that is to be blamed, not the youth.”

Also, unemployment, he says, is not limited to any particular social strata. Both urban as well as the rural India suffers from the same problem.

The video starts with a village in Odisha and later shifts to Delhi’s streets and the Rashtrapati Bhawan.

The location shift, as De points out, is to symbolically send a message to the establishment – which not just excludes the youth but also the transgender community, who has to resort to begging and sex-trafficking due to the lack of job opportunities.

“The video was an effort to give a common voice to the two [youth and transgender]”, says De.

This is the first time a music video in India has featured transgender women as rappers.

De recalls his experience as a documentary film-maker in different regions in India and his interaction with the transgender community. (Sarita, who features in the video, studied with him in school.)

For him, the singing style of the transgender community in Odisha (locally addressed as “Ranga“) is very similar to rap music – rhythmic, catchy, quick-witted and a commentary on society’s ills.

“They [transgender community] are quite outspoken and usually react in an inimitable musical way when they are either looked down upon or see someone else being ill-treated. A spec of irritation can trigger a spate of critique in their sing song way. Thus I consider them to be the local rappers of Titilagarh town,” he said.

The transgender community, according to De, is well aware of the country’s politics and how successive governments have overlooked their concerns.

In the video, they brazenly dance in the middle of the street, ride extravagant jeeps and stand outside the Rashtrapati Bhawan with frowns on their faces only to reclaim the spaces they were traditionally denied and to demand jobs they rightfully deserve.

Amidst all the sharp critiques, the video also manages to evoke a sense of hope with its quirky soundtrack and intermittent shots of rappers dancing with wide-smiles on their faces.

The director didn’t intend to make a depressing video on the jobless youth. He wanted to tell a serious story but in a fun yet evocative way.

The video, towards the end, stirs up positive emotions when the rappers reject all the false claims of the politicians and talks about striving towards the path of success.