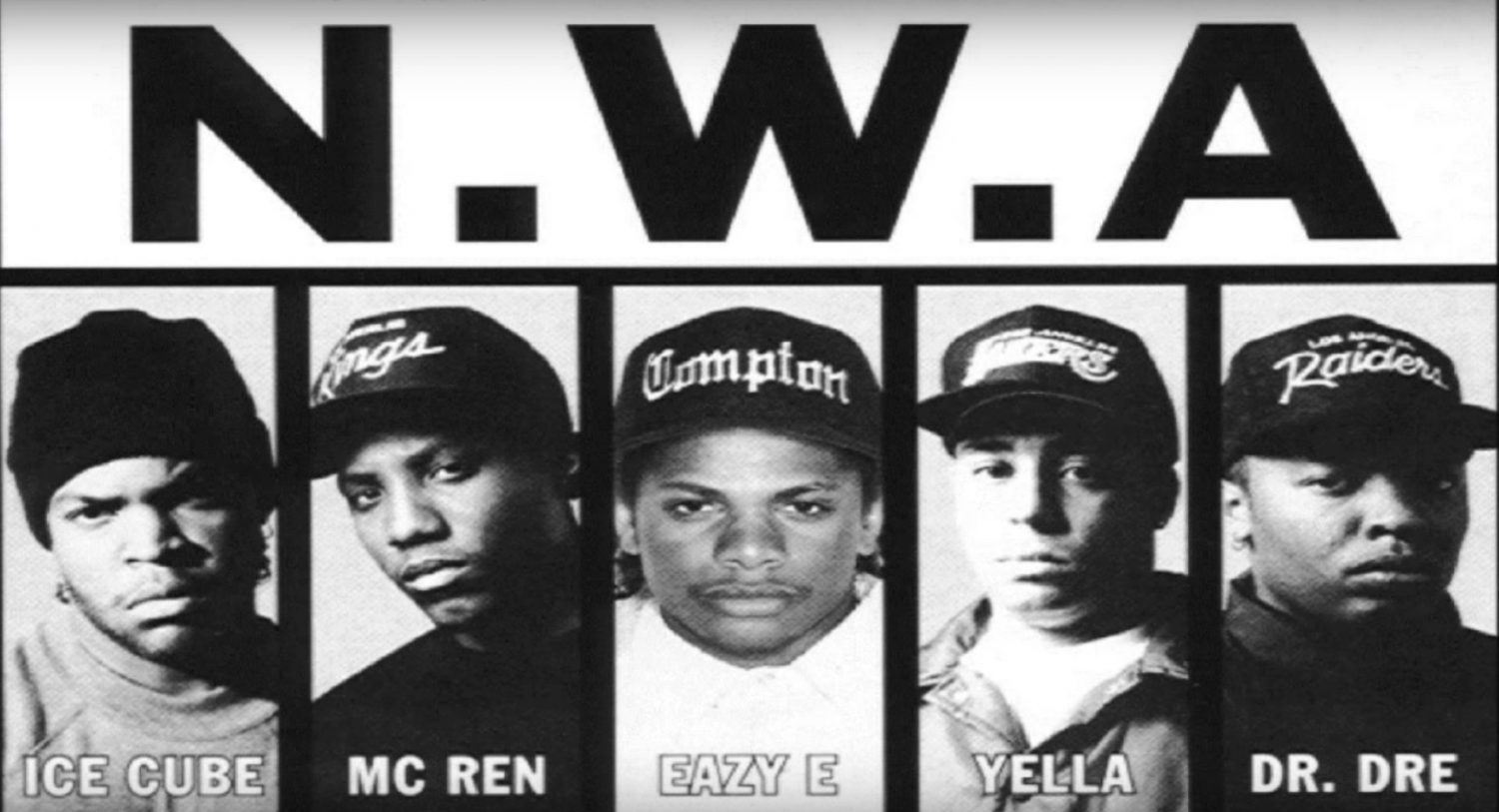 Badges and guns, gangs and volleys of gunfire… this is how the streets of Compton, California, were in the 80s when hip-hop groups first began to emerge. One such group was N.W.A which quickly moved from mainstream rap to what came to be known as ‘gansta rap’– most notably with their protest song ‘F*** tha Police’, an anthem against racial profiling and police brutality.

The song plays out a parody where Dr. Dre is the presiding judge over a case where the Los Angeles Police Department (LAPD) is on trial and Ice-Cube, MC Ren and Easy-E, all members of the N.W.A, are the lead prosecutors.

One by one, each of the members take the stand to indict the LAPD for its racial bias and harassment of communities of colour. However, with lyrics like “sucka in a uniform waiting to get shot,” the group is clearly playing on the biases people have against rap being violent. The whole thing goes to show that gangsta rap is complex and nuanced in a way that sweeping statements can’t grasp.

In the end, the jury finds the LAPD guilty of “bein’ a redneck, whitebread, chickenshit muthaf***a” and the hook “f*** tha police” rolls in.

The phrase ‘f*** tha police’ obviously signifies a defiance towards authority. And while initially the phrase found itself reiterated on merchandise, like t-shirts and caps, and street graffiti, Eventually, it moved to the internet, continuing life in comment-section references and memes on sites like Reddit, 4chan and Tumblr. Most notably, blogs like ifyouseesomethingfilmsomething on Tumblr used the phrase as a tag to increase awareness about police brutality and bring attention to police-led assaults which were captured on camera.

August 9, 2018 marks three decades since the protest song was first released. And sadly, 30 years later the song is as relevant as it was then.

In 2017, Ice Cube released a single titled ‘Good Cop Bad Cop’ and nicknamed it ‘F*** the Police 2017’. In an interview on Apple’s Beats 1 Radio, Cube noted, “We had done ‘F*** tha Police’ so many years ago… With the emergence of Straight Outta Compton, the movie, we realised that it’s still the same thing that’s going on. We needed a more up-to-date version of the community talking to the police and the authorities.”

Police brutality is not a new issue in the US. Black and hispanic people more likely te “be stopped by the police, convicted of a crime, denied bailing issued a longer prison sentence” compared to their white counterparts. These systemic biases aren’t just limited to adults, but impact younger, school-going populations as well. According to the American Civil Liberties Union (ACLU), “Zero-tolerance’ policies criminalize minor infractions of school rules, while cops in schools lead to students being criminalized for behavior that should be handled inside the school. Students of color are especially vulnerable to push-out trends and the discriminatory application of discipline.”

And therefore, songs like these, and the genre itself, are important since they bring the severity of racial bias in law enforcement agencies to the forefront of national conversations.

These songs don’t just help get people’s attention to the important issues, they also help in keeping that attention focused by becoming a part of regular rhetoric. To illustrate, Google Trends shows that the term has been in steady use for years now, an indicator of its continuing relevance.

The album ‘Straight Outta Compton’ also continues to remain relevant. In the days preceding the release of the biopic named after the album, Dr. Dre launched a meme generator ‘Straight Outta Somewhere’, where fans could fill-in the logo of ‘Straight Outta ___’. While some took to making lighter references to Hogwarts and Game of Thrones, others used it to highlight the Black Lives Matter movement.

Music, especially protest songs, has a long history of being used to criticise race relations in the US. Be it the blues or jazz or hip hop, each has its origins in the terse racial relations that define the US’ cultural fabric. The civil rights movement won black Americans many rights, but there’s a long way to go in terms of equality – racism shapes workplaces, schools, public spaces, housing opportunities. It’s this equality that gives rise to musical critiques.

As we mark this 30-year anniversary, here are some other songs to keep us aware of what’s going on around us. Like ‘F*** the police’ there are others like ‘Spiritual’ by Jay-Z and ‘How Many’ by Miguel, which were written in reaction to the killings of Alton Sterling and Philando Castile. There’s also Janelle Monae’s ‘Hell You Talmbout’ and ‘Glory’ by Common and John Legend which ties civil rights era to the present day with lyrics like “That’s why Rosa sat on the bus/That’s why we walk through Ferguson with our hands up.”

Rishika Pardikar is a freelance journalist based in Bengaluru.