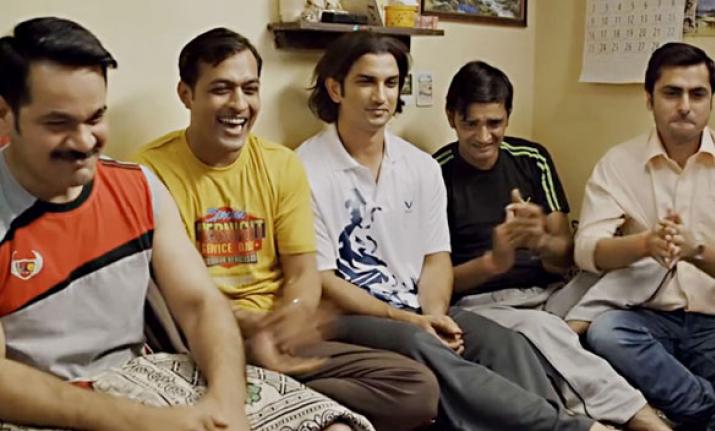 It has been a while since this particular scene has been playing in my head. Particularly the last bit:

A young boy in Ranchi, aspiring to be a cricketer in the Indian Cricket Team, has been informed about an opportunity to play a match in Kolkata. The boy, along with his four other friends, wonders how he will manage to get to the venue on time and how on earth he is going to manage to put together the money he requires. His friends offer to drive him to the airport and give him the money he requires. Soon after, they all rush to their homes to gather whatever money they can for their friend.

In the next scene, one of the four friends, Chittu enters his own house, scours every little nook and cranny, collects all the money he can find and leaves. He doesn’t even deign to look at, let alone, say a word to his mother, who utters just two lines:

This scene, as you may have guessed, is from the film M.S.Dhoni – The Untold Story. Apart from endlessly eulogising its faultless, perfect, struggling hero, this biopic also celebrates the quintessential Bollywood ideal of ‘yaari-dosti’.

Ever since its release, I have always watched the film without much thought.

However, a few months back, something crept into my mind as I was watching the film again. And the thought has stayed there ever since.

“Can there ever be a female version of the film?” I wondered.

Well, yes! A film about a female cricketer and her struggles in definitely possible. Why not a biopic of Mithali Raj – captain of the Indian women’s national cricket team? Are our women-in-Blue any less inspiring than our men-in-Blue?

In fact, we actually have had films about gutsy sportswomen in India. Movies have been made (Mary Kom, Dangal) and are still being made (P.V. Sindhu’s biopic).

My question, or rather, my musing was with regard to the ‘yaari-dosti’ aspect of M.S.Dhoni – The Untold Story. Can we ever have a film where the protagonist and the supportive ‘yaar’ is/are women, and women alone?

Yes, there can be many such movies. If only women in real life had just one thing – Chittu’s mother!

The absence of a Chittu’s mother in women’s lives is the ultimate literal, metaphoric, symbolic answer to the question – why women in reel or real life have not become all things they are quite capable of being?

Being the Bollywood ‘yaar’ is just one of those things that women, especially Bollywood heroines, most definitely cannot be!

I believe Bollywood seems to be absolutely reluctant to recognise and narrate stories of genuine female bonding, companionship and support.

It’s quite disturbing to see that our filmmakers seem to overlook the sundry female-gang-of-friends that one sees everywhere. They are all around us – at schools, colleges, workplaces, families and every other group of community.

Stories about their lives, their fun, frolic, their mental, emotional and various other forms of support can give us such amazing, inspiring, and, if dealt well, even entertaining movies. More so, because these girls/women never have it easy when it comes to making or being friends.

Remember, they don’t have a “Chittu’s mother” at home!

Picture this: A female M.S. Dhoni (young aspiring cricketer) is in need of money to reach Kolkata for a match. Although her girl-gang supports her, they cannot barge into their homes late in the evening, pocket all the money from every nook and corner and simply leave. Forget the money, if one of her friends does so, she would have to listen to sermons all night on how rude, disrespectful and unladylike for not responding to her mother, like Chittu in the film. And do we even need to get into a discussion on the number of families that would have let their daughters drive all night to drop their female friend at the airport? That too for a cricket match?

Despite all this, women do break the invisible barriers and lakshman-rekhas to help one another. They often stand behind each other as pillars of strength, however invisible that pillar might be to the slanting-squinted eyes of the society. They struggle with the barriers around them to look out for each other. Some fight, some cajole, some cry, some manipulate, but they do all they can to be there for one another.

It is precisely for this reason that I felt female-yaari stories could have made for some amazing movies. If only, they were ever made.

Also read: ‘I Like My Body Best When I Am Dancing With My Best Friends’

Unfortunately Bollywood’s brush with ‘Womance’ has largely been limited to movies that focus on extra tragic or comic familial, physical or sexual experiences of the women on screen. And then there is the whole bunch of bitchy, jealous, gossipy, or even unbearably bossy girlfriend stereotype.

Think about it – Are movies like M.S.Dhoni or Zindagi Milegi Na Dobara (ZNMD) merely about the protagonists’ familial, physical, or sexual issues? Are the mutual misunderstandings between, say, Arjun and Imran in ZNMD manifested in bitchiness, back-biting and jealousies?

Their characters sulk and fight, but they do so like adults, normal adults!

The amazing humour in the movie does not depend upon the protagonists turning all bitchy and catty on one another. Why, then, the film-makers continue to create female characters which such traits? Women aren’t cats and dogs. They are human. They are normal human beings.

However, their lives and experiences are often a far cry from those portrayed in the movies. It is quite unfortunate that when two of Bollywood’s extremely talented women – Zoya Akhtar and Reema Kagti – came together and planned a buddy-road-trip movie, it turned out to be a ZNMD with four male protagonists. Why couldn’t the zesty, sociable Laila (Katrina Kaif) and her own girl-gang have been the centre of at least a sequel to ZNMD?

Sad, such a film couldn’t see the light of the day.

And finally, when a Veere di Wedding did happen, it fell prey to the same tropes and stereotypes that have done women and their stories more harm than good. The only film, according to me, that seems to have cut the mark is Parched.

However, I feel that writing about this amazing film in few words would be a crime. I will, thus, leave it for a more detailed analysis in another article altogether.

Back to Chittu’s mother’s scene in M.S. Dhoni – The Untold Story.

What shall be answer to all my questions and criticism?

Well, if I were to suggest an answer to how does one fill the gaping void in the genre of female-buddy-cinema in Bollywood, I’d say there are two options: either, the industry gets a little more mature and starts writing genuine stories on true female friendships or ‘yaari’

Give us (women) mothers who say,

Vasudha S. is a literature graduate based out of Udupi who is looking forward to finding new life and expression in writing