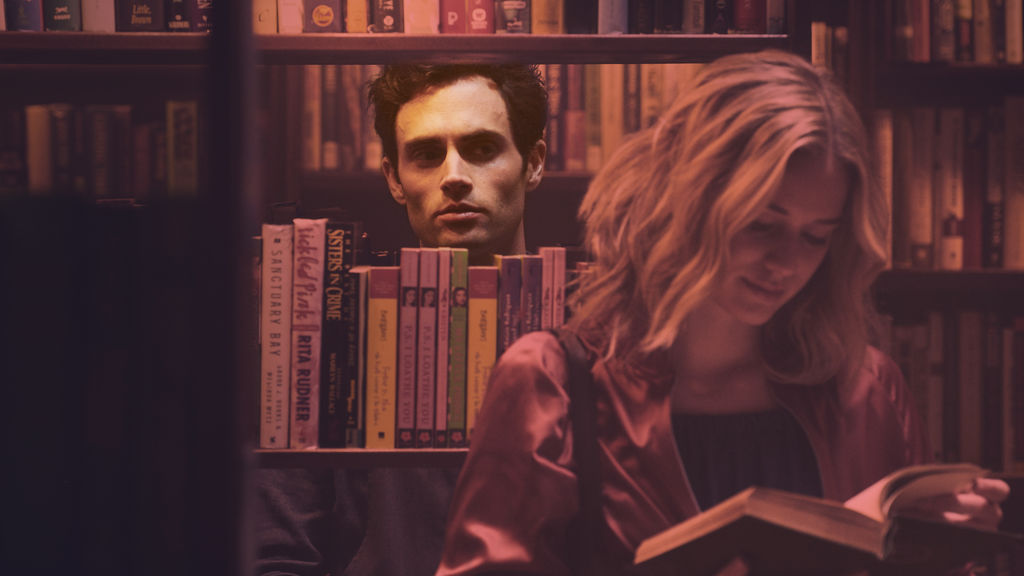 Stories that humanise the ‘psychopath’ and make him relatable are nothing new on American television. Showtime’s Dexter did it for seven-odd seasons, albeit with dwindling success. Netflix’s new serial offering You also presents a clean cut boy-next-door with a dark twist. However, where Dexter presented its titular character as a vigilante of sorts (however warped), You’s central character harbours no such pretensions.

Unlike Dexter Morgan’s fixation on ‘punishing’ depraved criminal behaviour, You’s Joe Goldberg is not concerned with the glaring loopholes in the legal system. He is not a self-styled executioner, delivering what he thinks the criminal justice system fails to do. Instead, what commands Joe’s single-minded, obsessive focus and drives his increasingly violent actions, is something much more visceral, potent, self-serving and all consuming – romantic love and desire.

In a matter of seconds, and before they have even exchanged a word, Joe casts one long look at writer and grad student Guinevere Beck, as she walks into the quaint bookstore he manages. Gazing at her whilst lost in his own rambling thoughts, we hear him unilaterally decide that Beck is simply asking for his attention and is positively begging for someone like him to come into her life and sweep her off her feet.

Serendipitous meet-cute, flirtatious banter, sexual tension, check. You’d think love-story is a go, surely? Except that Joe also thinks that methodically inserting himself into every second of the life of the object of his affection is quintessentially romantic. He will stop at nothing to remove perceived obstacles between him and Beck, or rather between him and who he has decided Beck is and what she represents.

That the show makes generous use of classic romantic comedy movie tropes is, then, not a coincidence in the slightest. You is premised on these immediately recognisable situations, set-ups, gestures and moments, which we, as an audience, have seen unfolding in a dozen iconic and feel-good movies, where they are portrayed as the last word in romance. The clinical deployment and grotesque subversion of well-worn but much-loved tropes lies at the heart of the show’s first-season narrative arc. Over the course of ten episodes, the show slowly proceeds to stretch them and turn them inside out, exposing a dark and destructive well of creepiness at their core.

The show’s deep dive into the psyche of the protagonist as perpetrator, and the fact that he ticks all the boxes of conventional attractiveness and desirability, has resulted in considerable online discussion. You’s making us all question the show’s exact intent and execution.

If web chatter is anything to go by, some viewers are convinced that the show’s depiction of the women characters as shallow, vapid, and manipulative is deeply problematic. I offer, however, that this uneasiness among audiences, amplified by being trapped in the stalker’s perspective, is the entire point of the show.

Though this narrative strategy can be a slippery slope if not handled shrewdly, in this case, the story follows through with the rules it sets, and leads to a conclusion that does not shy away from taking Joe’s actions to their inevitable consequences. In the process, it also makes us reconsider the media tropes that sugarcoat, glorify and romanticise these very patterns of behaviour.

The last episode condenses this into an insightful and eloquent mini-monologue, which has, interestingly enough, prompted some to describe the show’s commentary as too unsubtle.

You’s narrative and structure constantly plays, almost gleefully, with our expectations and our tendency to make snap judgments. In this context, the casting of Penn Badgley seems self-aware and deliberate and is, without doubt, an excellent decision. Instead of trying to shake away his association with the teenage soap opera juggernaut that was Gossip Girl, Badgley fully leans into the unsavoury aspects of his character from the show to play Joe. Joe is, as the actor himself puts it, clearly a ‘meta progression’ of Gossip Girl’s resident ‘Lonely Boy’ Dan Humphrey. For many watching the show, this parallel is far from lost and is proving to be rather disturbing.

As the narrative progresses, the show’s characterisations almost dare you to wonder if Beck actually enables Joe’s behaviour, and does Joe’s conventional attractiveness absolve him of a lot of micro-aggressions and transgressions, and maybe even major ones, in our eyes? Do we find that we buy into his exhaustive inner monologue that coolly explains and justifies each terrible thing he does ‘for love’? After all, her friends all do seem vacuous and insufferable. Do they deserve their fate? Also, Beck is blond and flighty, she smiles too much, has gigantic front windows, with not a shred of a curtain in sight: “What kind of person is she?”

As viewers, our assessment of and response to Beck, which can range from being indifferent, annoyed, exasperated to downright frustrated, perfectly illustrates how easily we tend to judge young women and the choices they make in their lives, how quickly we jump to hold them responsible. Simultaneously, it exposes how inclined we are to forgive men for any transgression, especially good-looking and seemingly ‘charming’ men, based on a thousand little excuses.

We’re in a moment where we’re facing our collective inability to reconcile famous and well-respected men’s terrible actions with their status and reputation. In this era, You should ring a lot of ominous bells, and hopefully touch some nerves too.

Amaal Akhtar is a PhD research scholar with an abiding love for popular culture analysis.