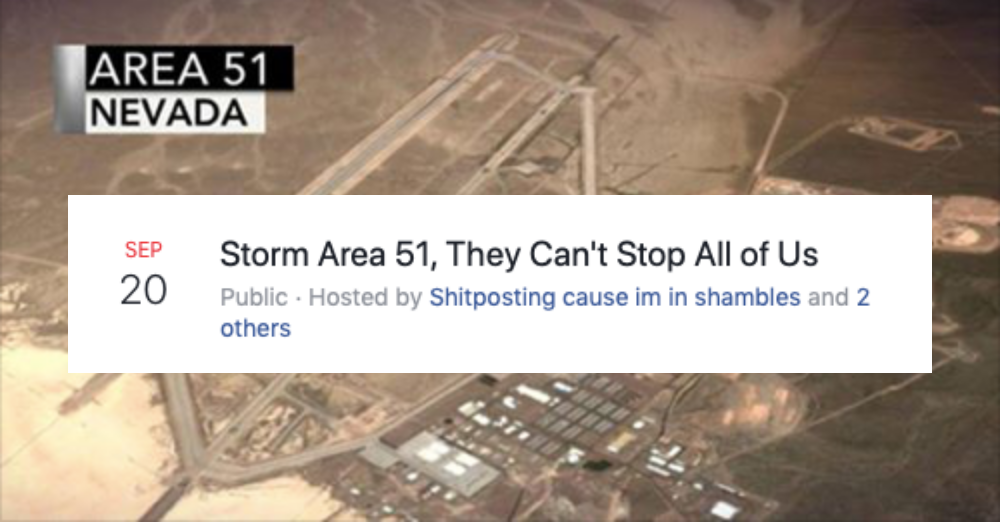 It began on June 27, 2019, and thousands have been joining the cause each day. As of today, over 1.4 million truth-seekers have clicked ‘attending’ on a Facebook event that promises to be the mass movement of the century: ‘Storm Area 51, They Can’t Stop All of Us’.

Conveniently scheduled from 3 to 6 pm on a Friday afternoon, September 20, 2019, the event text reads: “We will all meet up at the Area 51 Alien Center tourist attraction and coordinate our entry. If we Naruto run [a reference to the high-speed locomotion style of the Japanese anime character Naruto, wherein one must sprint with arms angled behind the body] we can move faster than their bullets. Let’s see them aliens.”

The overwhelming response to the event has even prompted a reaction from the United States Air Force (USAF). Last Friday, when 540,000 had confirmed attendance, Air Force spokeswoman Laura McAndrews told the Washington Post, “[Area 51] is an open training range for the U.S. Air Force, and we would discourage anyone from trying to come into the area where we train American armed forces. The U.S. Air Force always stands ready to protect America and its assets.”

Buried in the desert, close to Las Vegas, and deeply mysterious – Area 51 is no stranger to internet fame.

A USAF facility since 1955, it has been subject to years of conspiracy theories regarding aliens, UFOs, and everything supernatural. Rumoured to be the site where the US government performs tests on aliens, courageous crusaders have pledged to use the takeover to liberate the extraterrestrials. While a disturbing number have expressed sexual curiosity regarding ‘alien cheeks’, others have vowed to forge friendships, safeguard their interests, adopt them as children, or even win an interstellar hand in marriage.

I think it’ll work from Area51memes

An explosion of multi-layered content, deeply steeped in internet history and incomprehensible to those over 35, has proved ‘Storm Area 51’ a summative masterwork in Generation Z meme culture. Since its inception, the crusade has ballooned into a haven for this generation’s greatest strategic thinkers.

Alongside detailed, military schematics for the campaign (brilliant in strategic skill, if deficient in the artistic), users of Reddit, Facebook, and Twitter have spawned photoshopped images of popular figures, such as Elon Musk, Barack Obama, and Keanu Reeves, pledging their support for the movement. Having co-opted these figures as integral to the plan, supporters are confident they are on the cusp of greatness.

The ‘Storm Area 51′ meme seems to be spiraling out of control, as even users across Instagram, Tumblr, Pinterest and TikTok have leapt onto the bandwagon with glee. Always a pop-culture theme of considerable allure, aliens, when juxtaposed with the action-movie trope of dramatically storming a secure facility, seem to have seized imaginations like nothing before. Coupled with the randomness, disorganisation, and nonsensicality of the plan, ‘Storm Area 51’ perfectly tickles the funny bones of Generations Y and Z.

What will happen on September 20? It seems highly unlikely that a million people will leave their homes, drive for hours, or buy plane tickets to the Nevada desert in order to charge en masse, headfirst into reinforced gates.

If they do, the US government is legally authorised to use lethal force. Additionally, water cannons, tear gas, stun grenades, and acoustic hailing devices can all be used to non-lethally disperse the crowd.

No one would be stupid enough to actually show up… right?

Me and the boys pulling up to Area 51 from Area51memes