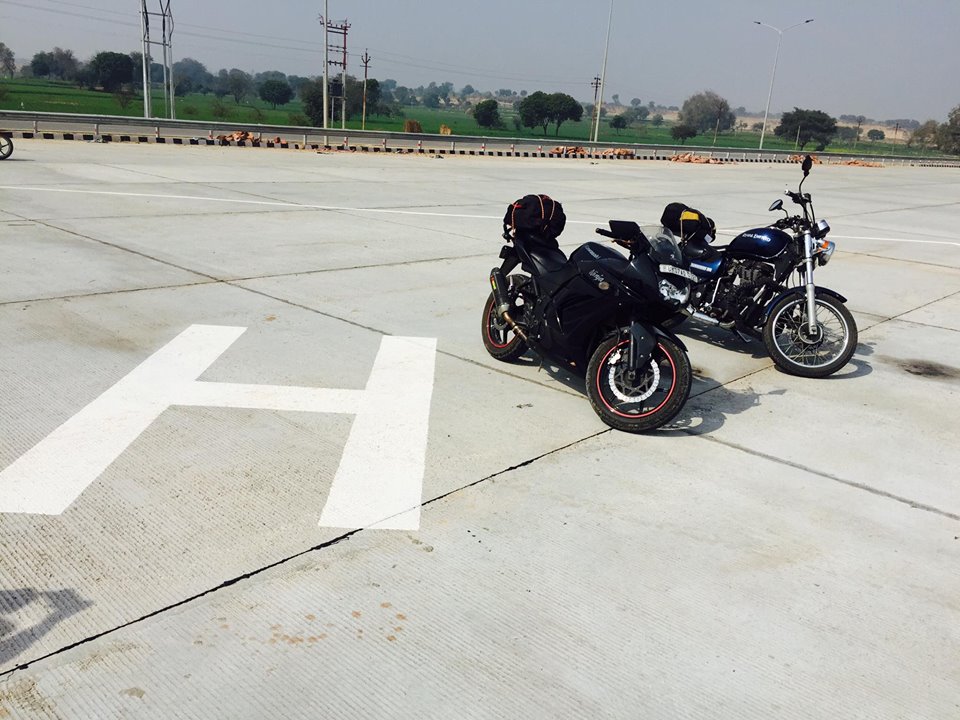 Only a motorcyclist knows why a dog sticks his head out of a car window.

Admiring the scenery from a window is cute, but being a part of it is a lot more exciting and a lot more fun. Bringing the focus back to the crux of this piece – my journey to Kathmandu on a motorcycle. It was a regular but pleasant evening as I sat down with a friend to chart a plan for a long weekend ride.

Khajuraho…Gwalior…Bharatpur…Kathmandu! Wait! What? Did I just say Kathmandu? Nepal on a bike! A legit cross-country ride! It was by accident that I settled on this very unplanned plan – the making of a perfect storm.

Logic dictates that for a ride like this, you get on your laptop and extensively research road and weather conditions, legal formalities and begin to systematically chart a route. But no! We were at a whole new level of chill and adventure seeking mode.

My first car was a Motorcycle!

For all I knew my loyal steed, a Royal Enfield Thunderbird 350, would be ready to take on the challenge, so who was I to doubt its calibre. My friend would be on her Kawasaki Ninja 250R, which isn’t exactly built for stuff like this, but that could be what she saw a challenge in. We set off.

Sometimes the best communication happens when you’re on separate bikes.

It was the afternoon of 7 February 2017. Ignoring logic once again, we didn’t leave in the early hours of the day, which we were meant to. The first major city en route was Agra and there’s a hotel in the city which we both like. So, we stayed the night! Distance covered from the 1200 km ride to Kathmandu on day 1 was 235 – big facepalm, I know.

Getting ready to hit the road

My Bike relaxes as the sun sets over Lucknow Expressway

My Bike relaxes as the sun sets over Lucknow Expressway

Day two – it was a 340 km ride from Agra to Lucknow. We’d expected bad sections of road but after some investigation with the locals, we found that we could access the Lucknow Expressway from Etawah. So we did and munching down the miles was easy. It is a really well-built road too, unlike the unfriendly concrete surface on the Delhi-Agra stretch. But weirdly and very sadly, it had dead dogs on it. Yep, you read that right. We saw two (sometimes more) of those about every two kilometres.

Exiting the expressway in Lucknow, the road now continued to Faizabad, another 130 km ahead. It was an impromptu stay at a budget hotel, and no, it was nothing like our stay at Agra. But no fret, it’s all part of the package.

Day three was when the cross-country ride happened. No more casual stops, just head straight to the destination – a nice boutique hotel in the heart of Kathmandu. We entered Nepal from Sunauli border, which is about 200 km from Faizabad. Post some mild document formalities, we were back on road.

For once, I’ll share some actual travel advice – one can easily mistake the ignorant security at the border as an invitation to simply walk in or ride in (in this case). But your permit and other documents may be checked several times during your stay in Nepal. It happened to us because a Thunderbird and a Ninja with single riders, bags at the back and alien number plates were especially easy to spot.

Once we joined the East-West Highway after Sunauli, the going was smooth. It connects Ramnagar to Mugling and is rather a very good road. However, there was a 30 km bit, which may have been fixed now. But back then, it was like a patch of jungle had just been cleared and there was full-fledged traffic on it. Might I say, I was smug and comfortable on my bike. The Ninja, however, had to slow right down for this patch. How bad was it? To put it simply, it took us 1.5 hours to do that bit.

We arrived in Kathmandu at two in the morning and were surprisingly welcomed by a very alert and active squadron of Nepal’s security force. And by a welcome, I mean an examination of our documents.

Our phones were obviously out of service so there was no help from Google Maps. The traditional method of asking around was the only way to go. So, we found three boys who were on a motorcycle (they were thin enough to fit on one). They seemed intoxicated as they tried push starting their bike – it’d run out of fuel! Mutually, we settled on a barter. I gave them a litre of petrol form the Thunderbird and in return, they agreed to lead us to the hotel. They did, but not to the hotel. It could’ve been the language barrier (or an intentional prank – either way, we got to see something new) but they took us to Kathmandu’s party district. Yep, there is such a place there. We were as surprised as you are. Skimpily dressed women, drunk men and everything.

We thankfully found a man who wasn’t drunk. He was to lead us to the hotel on his fancy dirt bike. The nice man, however, was not very confident with the route. So, eventually, our squad was joined by two policemen who were also on motorcycles. The gentlemen dropped us safely to the hotel which was situated right behind Durbar Square, which houses the fabled Pashupatinath Temple. My friend got a picture of her Ninja parked within the temple premises, right at the face of the temple in the dead of the night, feeling quite accomplished having done that in the presence and with the consent of the police.

Our stay lasted only a day on Kathmandu, half of which was invested in straightening our bones from all the riding. But we didn’t mind that it was just a day because we were happy with six days of a fantastic riding adventure.

Durbar Square entrance. The entrance fee is cheap for citizen from SAARC countries as compared to rest of the world

To sum it up, the trip can easily be made in two days. You don’t have to take three days like we did because we had the time. And I am sure of this because, on our return leg, we stayed somewhere near Sunauli border (only after 340 km), so the next day it was an 800 km ride – from Compirganj to Basti to Faizabad to Lucknow to Etawah to Agra and finally, Delhi.

Sure, flying would have been a lot quicker, but then it would never include the experiences we had, the people we met, the lessons we learnt from our own mistakes – the reason why a dog sticks his head out of the car window. If you don’t get that, you don’t have to.