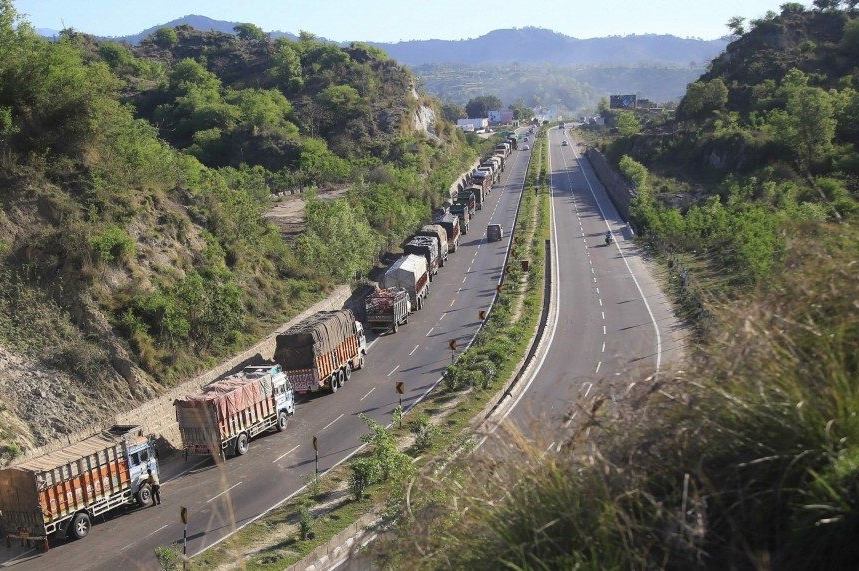 People in Kashmir often, in a fit of rage, denounce a person by declaiming: ‘Gokhe wati manz bandh (May you be stranded on the Srinagar-Jammu highway)’.

This carriageway is the northern-most section of National Highway 44 – the longest north-south highway in India, which terminates at Kanyakumari. The 300-kilometer stretch out of Srinagar connects the Kashmir Valley to the rest of India, and is effectively the only route open to most residents. It also remains closed most of the time due to its poor condition and unpredictable weather in the region.

However, the state government, on April 3, banned the movement of civilian traffic on the highway for two days a week – Sunday and Wednesday – to facilitate the movement of troops for the upcoming Lok Sabha polls in the state.

Until 1916, the only way to travel from Jammu to Srinagar, by road, was from Rawalpindi by the Jhelum Valley Cart Road, opened in 1890. Before that, the valley could only communicate with the outside world through difficult mountain passes.

The route over the Banihal Pass, which would later become NH 44, was opened in 1916. At the time, it was the private property of the Maharaja of Jammu and Kashmir; a special permit was required to travel on it. It was finally opened up to unrestricted public use in 1922.

Before partition, the land-locked state was known for its connection with rest of the world. The history of the state bears witness to the fact that it welcomed many cultures, religions and maintained healthy trade relation as far as China, Central Asia and Persia through the north and north-west frontier despite its treacherous mountainous trails.

Kashmir had thriving trade relations with Samarkand, Kashgar, Khurasan, Bukhara and Yarkand, particularly during the 15th century. It also served as an important trade conduit between India and Central Asia. State politicians and separatists have repeatedly demanded the resumption of the traditional road links to the valley – demands which, unfortunately, never materialised.

The basic programme that had been outlined by the National Conference stalwart Sheikh Abdullah in 1944 in a manifesto entitled ‘Naya Kashmir (New Kashmir)’ had laid special emphasis on the construction of a tunnel under the Banihal pass and an all-weather road, which would allow access to the valley throughout the year.

The seven decades of wait seem endless and, while India is competing with China in infrastructure development, it is yet to build a formidable all-weather road which connects the valley with the winter capital – Srinagar.

Omar, a resident of Srinagar says: “we are caged in Kashmir, we had historical routes of trade and an exchange of culture with the world – from central Asia through the old silk route. Now we are left at the mercy of a highway which India has failed to make all-weather durable for the last seven decades. It is also highly accident prone.”

Kashmir – famous for its thriving horticulture sector in India and abroad – has been severely hit by this unreliable road connectivity.

Apples are the most important crop of the state. The valley produced 22.32 lakh metric tonnes of apple in 2016 according to the Economic Survey Report, 2017. Moreover, around 48% of the valley is under apple cultivation. There are around 7 lakh families, comprising of about 33 lakh people, directly or indirectly dependent on the crop’s cultivation.

The produce is usually sold in markets outside the state. An average of 500 trucks laden with apple boxes during the harvest season travel to different states through the Srinagar-Jammu highway every day. Due to very limited shelf life of apples, a blockade for even a couple of days can result in significant losses for people in the valley.

The highway also serves as the main source of essential supplies brought in to valley from other states of India.

Even a few days of blockade creates a scarcity of basic amenities in the valley. Kashmir is a state heavily dependent on supplies from other parts of India. The home-grown production of daily supplies is so limited that it isn’t enough to sustain the region for more than a couple of days in the event of a blockade. Sharp hikes in prices and deliberate hoarding of essentials by shopkeepers further stoke the frustration of the people.

People who take the highway, particularly during Kashmir’s harsh winters, are often fearful of getting stranded midway. This fear is not misplaced, as the government’s measures to help passengers – and the exorbitant prices charged for food and provision along the way – have traditionally been far from adequate.

Snowfall, landslides and security concerns regularly close the road and, so far, this year has been the most troubled.

Skyrocketing airfares during the road blockade have only added to the already amplified struggles of the valley’s inhabitants – especially for students who are enrolled in different Indian universities.

The majority of the 300-kilometre stretch is a single-lane road which is highly accident prone.

According to data released by the union ministry of road transport and highways, Jammu and Kashmir was featured among the top five states with the highest road accident rate in India in 2017. The average number of deaths in a year has been over 900 for the last six years, and those injured far exceed that. Experts blame the poor quality of roads and the Srinagar-Jammu national highway for it.

The recent suicide attack which took place on the same highway leaving 40 CRPF soldiers dead triggered more problems for the people because the government has now decided to restrict civilian traffic movement during the passing of army convoys.

As the improvement of the only highway connecting Kashmir to Jammu remains highly unlikely, people continue to suffer, particularly in Kashmir because of the absence of other alternative routes in and out of the valley.