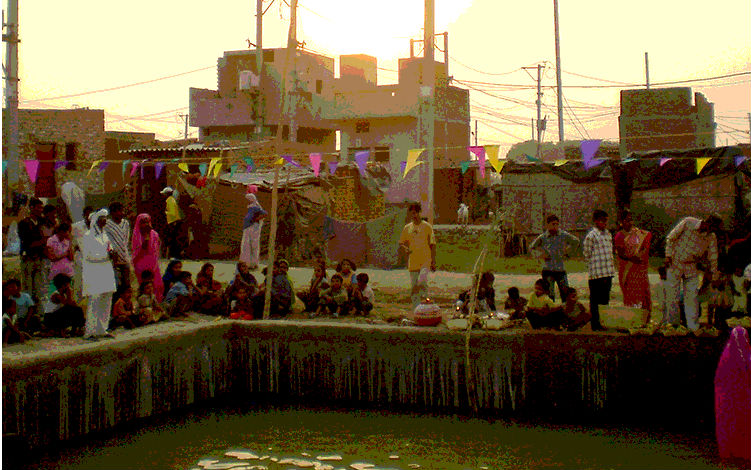 Savda is the largest resettlement colony in North West Delhi. It was resettled in 2006. The population is approximately 55,000. The residents of the locality are mainly migrants from UP, Bihar, Haryana, MP, Gujarat, West Bengal and Maharashtra.
§

English! I don’t know who created it, this English. I’m going to have to learn it, though, otherwise they will make fun of me over there.

When I would look out of the window of my small house, I would imagine a beautiful house made of tiles in front of me. The tiles would be glittering in the sunlight. The house would be really clean, and the area would also be proper. All of these things were cooking in my mind back then.

Ever since we got the news about our new house, I hadn’t felt like being in the room of our tiny house in Madipur anymore. I just couldn’t wait to see the new house. I knew this much: even though my new house would not be that big, the nearby houses would be nice and all the kids over there would speak English.

I imagined that in the evening, in the new place, everyone would gather in the park to play. The park would be clean and neat, and there would be no water or electricity problems. There would be greenery in every direction. During the day, the sunflowers would blossom and at night, the jasmine would bloom. I would make new friends who, after laughing at my awkward English, would teach me proper English. I kept asking Papa to show me the new house, but he never had time.

One day Papa suddenly told us to pack all our stuff because we were going to our new house. The biryani that had been simmering in my mind began to boil. It seemed to me that my biryani had become very tasty, and it was high time for us to eat it.

Outside our lane there was a big truck into which all of our stuff was supposed to fit. I didn’t think that four people – my family – and four to five of my Papa’s friends, who had come to help us, could all fit in that truck.

All the luggage had been put in the truck. Now it was time to fit the people into the truck. Some sat on the folding bed, some on the cylinder and others sat on a pile of clothing. The truck blew its horn and we left for our destination, Savda.

In the truck, everyone was talking to each other, some about our new house, some about how full the truck was. Talking about all these things, we arrived in Savda. I did not have a view outside, but I could see from the expressions on the other people’s faces that this place was really something special.

As I got out of the truck I had that feeling that you get when you have scored very high marks in your exam, and then suddenly it’s all cancelled. In front of me, there was a big pile of trash. Next to it was a one-room house with a tin-roof.  It was a bit bigger than the other houses and seemed new too.

Just looking at the house, I realised that this was my house. But I wasn’t in a hurry to see my house, I was in more of a hurry to see the house in front of ours. Arre, what is this? That house was worse than the others. Trash was strewn all over the roof. The door was broken as well, and all the bricks around it were missing. The biryani cooking in my head turned to spinach in front of my very eyes.

The first day was spent cleaning and moving in our stuff. The next day, when I left my house I saw that the door of that other house was completely open. It sounded like something was being broken inside. I looked inside and saw some people from the lane there, and I went inside. It seemed that the tin-roof was being taken down and the house was being renovated.

Later I found out that the house was not being renovated. Instead, the tin was being sold to buy food. The owner of the house had not come for many years. People said he was some kind of merchant. The meter had also been taken out of the house. And the lock had been broken many years before.

While all of this was happening, I heard the sound of the water tanker coming. A man took a pipe out of that house and began filling water for everyone…

Gaurav Kumar is a 15-year-old in the 11th grade, who lives in Savda Ghevra. class. This piece was translated from the Hindi by Thalia Gigerenzer. She is a German-American writer, anthropologist and audio producer based in Princeton, NJ, Berlin and Delhi.

All images by the Locality Archive, Ankur Society for Alternatives in Education.