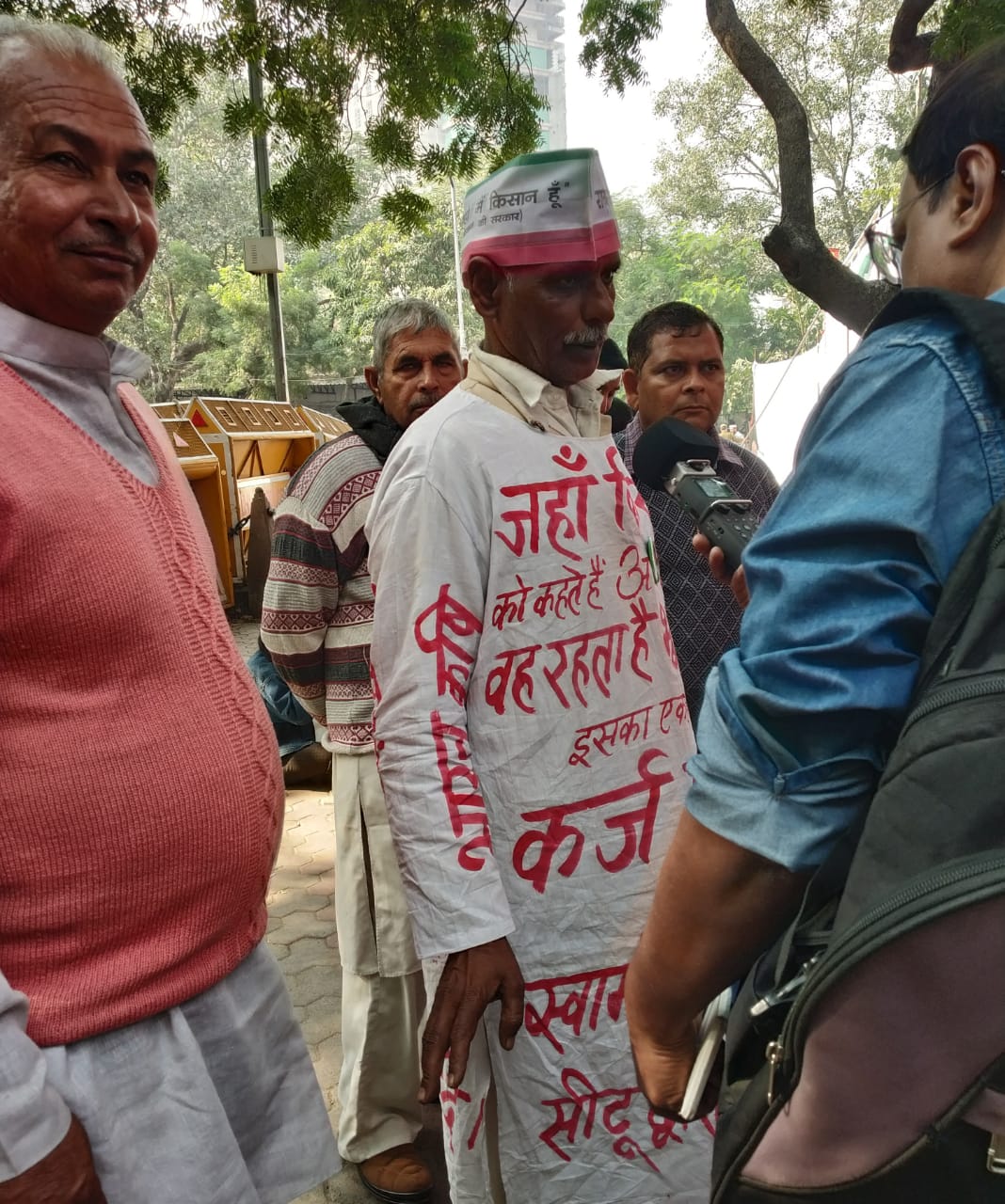 New Delhi: As thousands of farmers marched towards parliament street on November 30 to protest against the government’s apathy towards them; various voluntary organisations, theatre artists, college students and other allies joined in to amplify the voices of the aggrieved farmers.

Students from several universities marched with the farmers, shouting slogans along with them. Some distributed water and snacks; others tweeted about the protest to raise awareness and some carried posters with slogans like ‘Happy farmers, happy India’ or ‘Nation for farmers’ painted on them. Students from Delhi University organised into a collective and called themselves ‘DU for farmers’ to extend solidarity to farmers across the country.

“Seeing the farmer’s collective identity fills me with immense pride and it is overwhelming to see them all together. We marched with them from Majnu ka tila,” said Vidhi from St. Stephen’s college.

Another student from DU for Farmers said, “The farmers march is a nationwide protest where people from all over the country have come to Delhi to ask for important kisaan mukti bills on MSP and freedom from debt. I think it is an important cause and that is why we stand with the farmers because they, who feed us, are dying without food. As citizens of this country, it is important for us to support them.”

Some students from Ashoka University also participated in the protest march. “We have been with the farmers since 8 in the morning. As we marched with them from Ramlila maidaan till here, we met an old farmer who had come all the way from Maharashtra because he couldn’t pay his debts and was rendered homeless as a result. This is quite unfortunate and the government must pay attention to them.”

Apart from students and volunteers from colleges, there were some theatre artists who had come to sing revolutionary songs dedicated to the farmers. Rajesh Nirmal from The Color Bakery theatre group said, “I have come here to support this protest. We, as a theatre organisation, have been putting up street plays on farmers’ issues for past many years to prompt people to think about their concerns. This is the least we can do as artists and we unequivocally stand with all the farmers here.”

Members of Indian Youth for Revolutionary Change (an independent student-led organisation) performed their play on farmer suicide the night before the farmers marched on parliament street. “A lot of people turned up when we performed last night and we were overwhelmed by how farmers responded to our performance. We are going to amplify his movement further through our play. We are not part of any political party. We are just here to be part of this important movement,” said Ganesh, a member of the organisation.

Similarly, people from Asmita theatre group spoke about the revolutionary songs their group performed to address the farmers’ problems. “We sang revolutionary songs like ‘Tu zinda hai’ and ‘Le mashaal chal pade hain’ last night to stand in support with them. We are putting up another performance later this evening. This needs to be talked about out in loud,” said Vipul from Asmita theatre group.

Another middle-aged protestor echoed the same revolutionary tenor as he sang Krishna Kumar Vidrohi’s songs like ‘Khet, kheti, kisaan bachaava’ and ‘Majdoor, kisaan aur chhatra naujawanwa’ in the middle of a group of students who clapped and sang with him.

Among many of these supporters, there was also an artist Lokesh Khodke from Bluejackal comics, who sat quietly among the farmers, sketching his surroundings. Khodke’s sketches depicted the distressed and tired marchers being mobbed by people from the media. “I made a rough sketch of these women sitting with pictures of their dead husbands in their hands. I sketched a few others who were tired of protesting for past two days. These things are quite disturbing and people need to know this. I am planning to compile this into a story and spread it across social media,” he said.

There was also a lot of merchandise related to the farmers’ struggle being sold around the area. The All India Kisan Sabha (AIKS) sold batches and T-shirts with messages like ‘Nation for farmers’ and ‘Desh ki awaaz, kisaan ke saath’. Publishing houses like Phoenix Publishers Ltd. and many others put up stalls with books about farmers, land rights, farmer suicides etc. “We have picked up farmer centric books to sell here so that people come to know of the long history of farmers protest,” said the man who sold books near the congregation.

The farmers across the country were therefore not just supported by some political leaders who perhaps had come with an agenda but also by so many artists, publishers, volunteers and students who had just come to listen to them and increase the visibility of the much awaited movement.