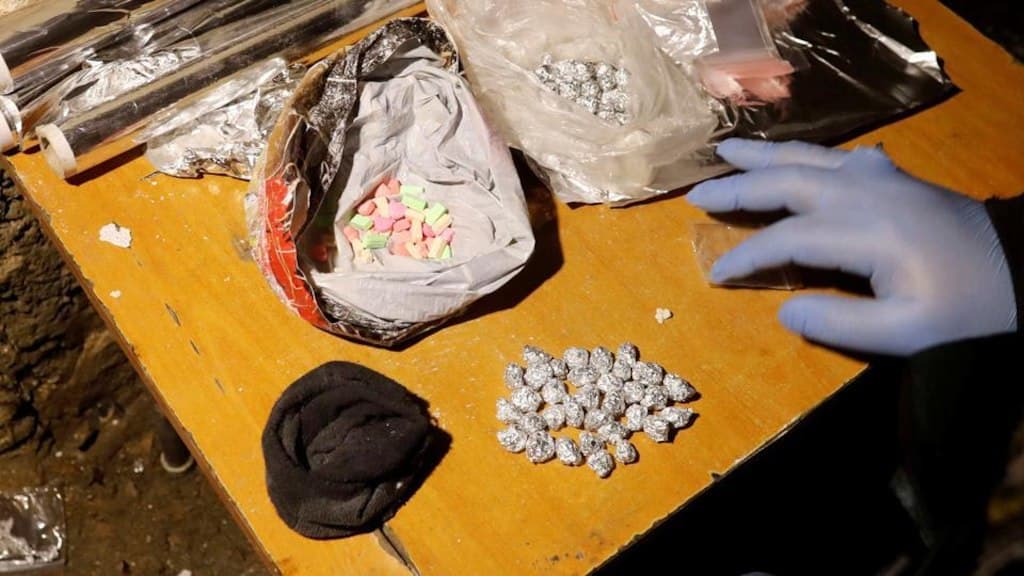 Lifeless bodies on the pavements, the crunch of syringes underfoot as you walk around ISBT; young children, clutching bottles of paint thinner and huddling around fires on the railway tracks.

In Delhi alone, as many as 80% of the youth in some settlements are addicted to drugs. At Yamuna Ghat, a smack addict says, “God won’t let me die. I’ve tried killing myself, but sadly I survived.” In Taimur Nagar, a drug dealer, hunched next to an open sewer, says he never intended to peddle heroin, but poverty made that decision for him.

Thanks to Narcos and the American media, we’ve learned a lot about that particular war on drugs, but not so much about the extent of this illicit global trade – worth over $600 billion – in our own backyard.

The Narcotics Drugs and Psychotropic Substances Act of 1985 has two objectives – to deter drug trafficking and rehabilitate addicts. It is failing at both.

A couple months ago, the International Drug Policy Consortium published a report titled Taking stock: A decade of drug policy – A civil society shadow report. Exactly ten years after the international community decided to concentrate its efforts on combating the global drug problem, the report’s enervating conclusion is that the war on drugs has been a total failure.

As calls for reframing drug policies grow louder, it’s worth examining where India stands in all this.

Cocaine, MDMA and other synthetic drug abuse among Delhi’s upper-middle and affluent class tells the story of socioeconomic mobility, shaped by Western tastes. The party drugs’ ubiquity is proof of the attention Delhi’s started receiving from transnational traffickers.

But let’s just say that the only threat the dude tripping on molly last night posed was to the dance floor. While synthetic drug abuse is a spiralling problem that requires attention, the majority of Delhi’s drug market is found in its seedier neighbourhoods where opioids and cheap solvents are widely used and abused.

Also read: We Need Ecstasy and Cocaine in Place of Prozac and Xanax

Nobody is born a drug dealer. Nobody wakes up one morning filled with an innate desire to traffic in human misery. And drug users aren’t devoid of ‘morality’. Both are merely by-products of an increasingly alienating and disenfranchising world – one which doesn’t always deal a fair hand.

As the divide between the rich and poor in Delhi widens, the unlucky slip through the cracks and try to claw their way back only to languish in neglect. With intractable unemployment, inadequate and social support – first comes frustration, then depression, then an unshakeable despair. Ensnared in a vicious cycle, and with nowhere to turn, the fleeting euphoria at the end of a needle brings solace, if not the promise of death.

The extent of substance abuse in New Delhi

The Narcotics Control Bureau (NCB), India’s nodal drug agency is in R.K. Puram, and just 15 minutes from it are the estimated 194 open-air and closed drug markets and user hotspots – serving the city’s 23 million denizens with any and all manner of vice.

Usually accessed via labyrinthine galis, Delhi’s drug markets are concealed deep within its many densely-packed slums or ‘JJ clusters’. Hiding in plain sight, they enclose an entirely different world from the one where cocaine and MDMA circulate. Rickshaw-pullers, manual scavengers and day labourers co-exist with petty criminals, murderers, drug dealers and brothels. Neglected and cramped, they become hotspots for dealing and using.

Well-concealed and teeming with vulnerable populations, Delhi’s drug markets are self-sustaining ecosystems. Everyone knows which door to knock on for a fix and which unkempt park to shoot-up in.

Inside Delhi’s war on drugs

This problem isn’t new, but the absence of a real framework for rehabilitation is alarming.

However, the quantity being seized isn’t even close to the actual quantum of drugs circulating in the city. The nature of shadow or hidden economies is to avoid detection, which makes interdiction an uphill battle – and a misdirected one, as it’s fighting the numbers, not the actual problem.

Given the drug trade’s clandestine nature, data is hard to come by and remains moderately representational at best. Some researchers conservatively estimate that 10-12% of Delhi’s population used an illicit substance at least once in the past year. The quantities being seized are testament to that.

Reliable statistics on adult consumption patterns remain elusive, but the consensus among researchers is that drug use in the city is grossly underreported.

The most acute problem is the exponential increase in heroin and opioid dependency among Delhi’s low-income residents. Recently, the use of amphetamine-type substances, tramadol, and Fentanyl – a highly addictive synthetic opioid usually prescribed to manage extreme pain – has skyrocketed among the same demographic. Often, lethal concoctions of these are smoked or injected.

It would be incorrect to say that the NCB and other agencies are wholly oblivious to these trends. Still, we urgently need to recalibrate how we see drug abusers. We need to change the narrative and go from seeing drug abuse as a ‘criminal justice’ problem to a ‘public health’ problem.

For instance, the NDPS Act sees consumers and traffickers differently but the courts treat them at par with each other. While the Act provides for sentencing addicts to rehab, it’s much stricter with with traffickers – there are rigid bail requirements, the authorities don’t need to prove intent to prosecute traffickers.

Yet, courts frequently send users away to prison – where their dependency on drugs is likely to worsen. Thus, drug consumption prima facie remains criminalised.

Seizing drugs and mindlessly ostracising and incarcerating drug users and smugglers isn’t getting us anywhere. It doesn’t limit consumption or trafficking, rather it compounds the problem.

If we’re concerned about people’s welfare, the questions we’re asking need to go beyond mere numbers – Will users have access to rehabilitative facilities, or are they to remain at the mercy of a punitive drug-control regime? Do people even know what they’re ingesting?

Is this a plea for legalisation? No. It’s a plea for structural introspection, regulation and most importantly – compassion. Most of us have vices of our choosing. But we aren’t treated like criminals because arbitrary social rules decide what’s morally acceptable and what isn’t – and we happen to fall on the right side of that line.