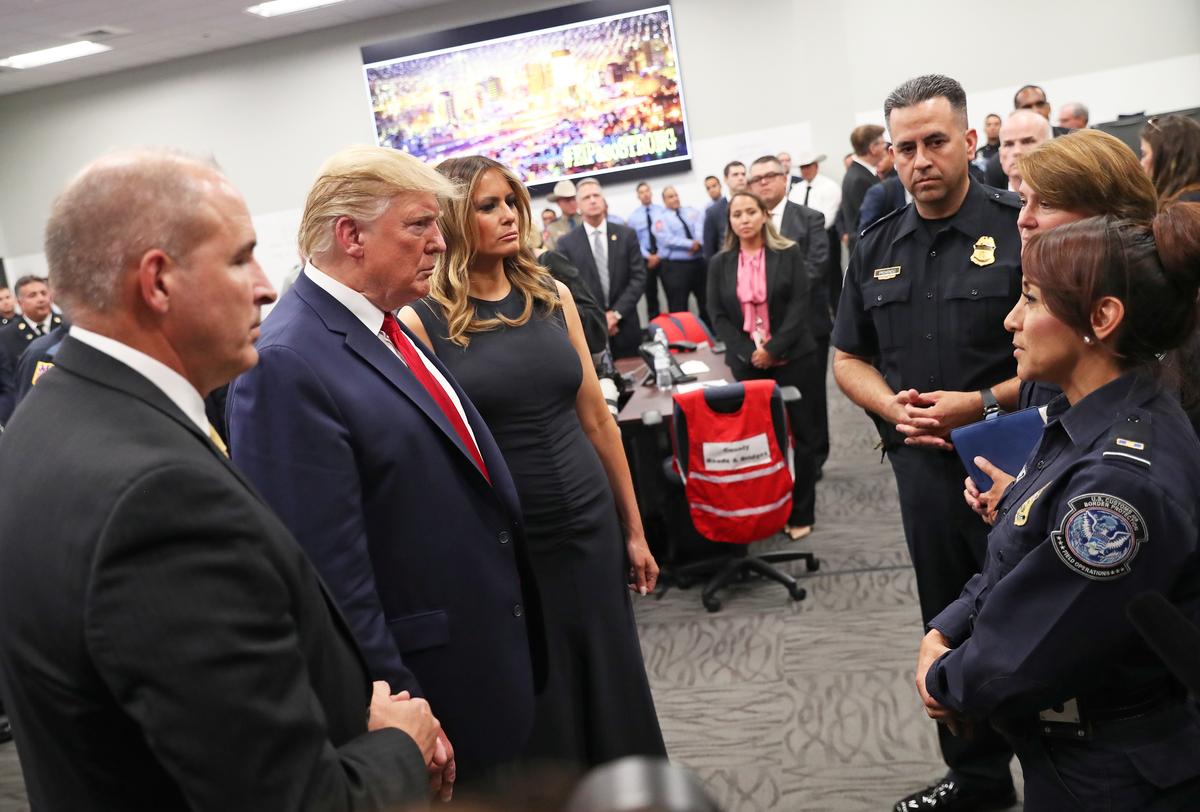 President Donald Trump’s statement on the horrific mass shooting in El Paso on August 3 that killed 22 people and injured 24 covered a lot of ground.

From video games and mental illness to the death penalty, the president drew attention to many variables – but not to the semi-automatic guns that are often used in mass shootings. Instead, he claimed that “mental illness and hatred pulls the trigger, not the gun”.

The response angered many people who see tighter gun control as the only way to prevent such tragic events. Some even accused Trump of “gaslighting” – a psychological manipulation to erode someone’s sense of self and sanity – something that’s happened many times before.

Gaslighting typically refers to intimate relationships. It’s a way of controlling someone by creating false narratives – for example, that they are irrational or crazy. If such lies are repeated constantly, victims may get confused and start believing there really is something wrong with them. Confusion, diversion, distraction and disinformation can similarly be used to gaslight an entire society. So how can you tell if you are being gaslighted, and how do you avoid it in the first place?

Most people around us act in good faith. We cooperate with each other in conversations by conforming to norms such as honesty and relevance. We tell the truth and we do not mention irrelevancies without good reason. When people violate those maxims, we normally doubt their sincerity or honesty. But in gaslighting, lying is used in combination with persistent denial, misdirection and contradiction in a way that can make us doubt ourselves instead.

While politicians have always tried to divert attention from issues they consider threatening or uncomfortable, more than 10,000 claims during the Trump presidency have been judged to be false or misleading. This puts Trump – and many other leaders – in conflict with the cooperative norms that make society work.

When confusion, diversion, distraction and disinformation are ramped up so they become an omnipresent pollutant of public debate, we may end up losing faith in the very possibility of truthful discussion – or in our own views.

Take the Russian-made Buk missile which downed Malaysian Airlines MH17 in 2014. Pro-Kremlin websites engaged in massive gaslighting by first denying it was a Russian missile, then saying it was an Ukrainian attack. Later on, they claimed the pilot had deliberately crashed the plane, and finally they said it was all part of a vast conspiracy to turn the world against Russia.

Most of those claims don’t fit together and each is implausible. But the cumulative effect is one of confusion and distraction from the Russian involvement.

So how can you know if you’re being gaslighted? In a close relationship, such as that with a partner or a boss, it will involve feeling confused and depressed. You may also be spending a lot of time apologising or making excuses for the gaslighter – even if you deep down know something is wrong.

If you complain about your experience to the gaslighter, you’d most likely be told it’s not real – you could even be scolded for making false accusations or for being too sensitive.

When it comes to politics, the signs are similar. You may feel confused and alone in the world, assuming nobody understands your point of view and that it must therefore be wrong. Take racism. You may have known exactly what it is. But when Trump accused US Congresswomen of colour of “racist hatred” in response to himself being criticised for racist remarks against them, this could have sown confusion about what racism actually means.

It is similarly hard to complain to a gaslighting leader. Several journalists who have questioned Trump have simply been banned from his conferences and told they do fake news.

By the time you notice you are being gaslighted, a lot of damage may have already been done. There is evidence that prevention is actually better than cure – even in the context of pure disinformation. My colleagues and I have repeatedly shown that people can be “inoculated” against being misled if they are taught to recognise misleading rhetorical techniques.

For gaslighting, such techniques include open disbelief in facts or evidence and persistent denial of having done or said something, no matter what evidence points to the contrary.

Gaslighting also involves diversion, typically by triggering an emotional response. When Trump repeatedly criticised the cast of a Broadway play via Twitter after the actors pleaded for a “diverse America” at the end of a show, many people felt outraged and some rose to defend the actors.

But most people missed the fact that this Twitter event coincided with Trump agreeing to a US$25m settlement (including a US$1m penalty) of lawsuits against his defunct Trump University. An analysis of Google Trends confirmed the success of this diversion, because the public showed far greater interest in the Broadway controversy than the Trump University settlement.

So the next time a politician says something outrageous, do not just be outraged – look for the real event that this shiny object is trying to distract you from. My colleagues and I have recently shown, in an as-yet unpublished paper, that Trump masterfully diverts the media and the public from information that is threatening to him. Knowing that is a first step in preventing gaslighting. You can’t be gaslighted if you don’t get confused and you won’t get confused if you are not misled in the first place.

In her incisive analysis of totalitarianism, the philosopher and political theorist Hannah Arendt warned that in an incomprehensible world created by gaslighting, people “at the same time, believe everything and nothing, think that everything was possible and that nothing was true”.

Truth is at the heart of liberal democracy. No amount of gaslighting should divert us from that.

Stephan Lewandowsky is Chair of Cognitive Psychology at University of Bristol