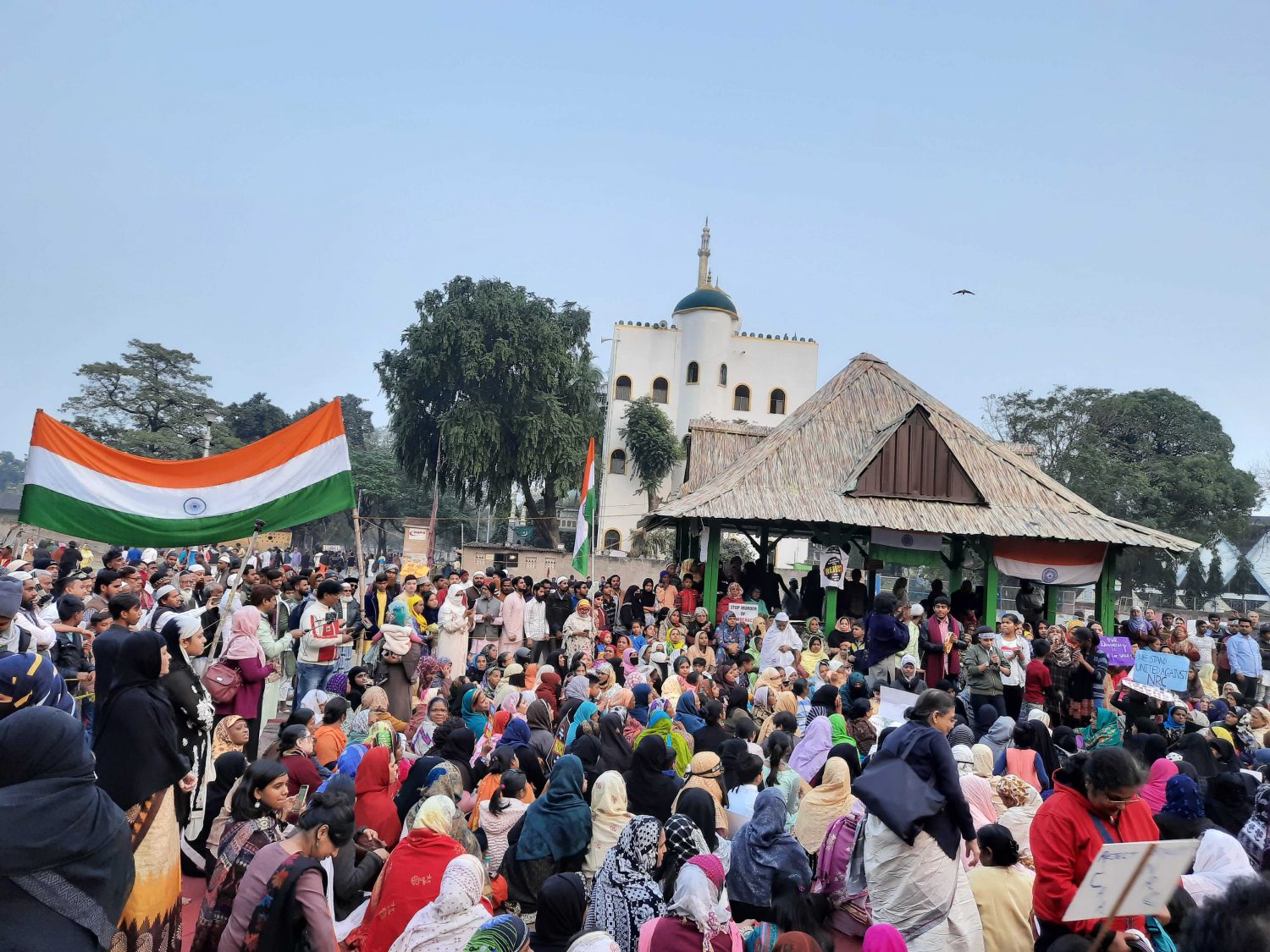 Kolkata: As you enter Park Circus Maidan from one-end of the seven-point crossing, the tri-colour welcomes you.

At the centre is a makeshift circular seating area surrounding a small, permanent shelter. If you are a woman, you are welcomed inside and if you are a man, you are asked to make way for women and occupy the peripheral space outside. The “gate” is kept by men, and the hoarding at the top of the entrance reads “Ladies Entry” with a “Only” added in later.

A banner that reads ‘only ladies entry’ at Park Circus maidan.

A young man points to the national flag, standing tall on the left of the seating space. He is holding a placard which reads: “We are one, don’t divide us,” and tells me, “I am not from any political party, or organisation. I am a student, and I have come on my own. See that flag? That’s what I represent. I represent India. Listen to me, they won’t be able to divide us.”

A student protestor holding up a placard which reads: ‘we are one, don’t divide us’.

Such has been the nature of the movement.

After the emerging success of Shaheen Bagh in Delhi, the call for a similar movement was made by a lady named Ismat, whose last name is “something like Zamil,” a young woman tells me. The movement has no face.

I meet another woman from a feminist organisation, who has come all the way from Salkia, Howrah. “Now I need to go back,” she says, “I need to save energy for the ‘Go Back Modi campaign’ tomorrow.”

A poster at the protest site.

As the afternoon rolls on, someone asks me for the time. I say, 5 pm. Not happy, he asks me for the exact time. I tell him four minutes are left to 5 pm. He talks to someone managing the “gate,” and the women starts going somewhere together.

Some women offer their evening prayers right there in the circle.

Also read: Women Against CAA, NRC: Breaking the Patriarchy From Within

As dusk falls, Kolkata sees a unity amongst people of different faiths opposing the CAA. We are getting to know each other better.

More women women join. Slogans are raised as the tri-colour flutters around.

The women, who were leading the slogan call before the prayer break, are replaced by others. A few political party leaders join, talk to the protestors, and leave. So do students from universities, who say that at least a few representatives of their organisation visit once every day.

People have started knowing each other, recognising and having tea together. The vendors have found new business.

The police, however, has not given permission for a structured roof of tarpaulin to be built over the seating area. It reduced the number of people in the rain two days back. At night, about 50 people remained, who found shelter under a small previously-built structure at the centre.

The men, who take care of water and snacks for the women, use this structure during the day. They bring resources on bikes, and a few women distribute it amongst those seated.

These women are home-makers, managing a community home instead.

Innovative slogans mark the protests. An old man holding two posters tells me, “I don’t know who started the protest. I got news, painted these, and have held on to them ever since.”

Both are in Bengali. “Who were the perpetrators of violence in JNU? The Urban Nazis,” claims one, with the face of the Honourable home minister painted on the side. Another tells “Modi, the tea-maker,” to go back from the airport, in sarcastic humour unique to Bengali.

Amit Shah’s poster which reads: ‘Who were the perpetrators of violence in JNU? The Urban Nazis’

And such has been the hushed tone.

Everyone speaks of the visit. When asked what exactly are the plans about the PM’s visit, no one seems to know anything.

Some say that he will be “stopped at the airport.” Another woman tells me, “I will be at the Y near the Raj Bhavan, where he is supposed to go. I heard that he can escape in a helicopter!”

Everyone is confident that the Honourable PM will have to return.

As the evening rolls on, men come into the Maidan rallying, shouting slogans. They go around the centre a few laps. As some women are about to leave, one proudly flashes a poster that reads: “Dekh bhai, Yahan sirf Ola, Uber ka CAB mangta.”

But more importantly, it says below, “No violence.”

When I ask her how long she plans to keep coming, “Until the law is rolled back,” she replies instantly.

As I am about to leave, a placard pasted around a lamp-post catches my eye.

“Suggestions & Complaints,” it says, pointing to a box placed below.

I am left wondering that if a movement can be democratic and responsive, why can’t the mighty government?

“Bura din wapas do,” I hear the chant from the crowd as I leave.

Debdutta Paul is a scientist with a heavy heart, who writes to express his anguish and worries in these dark times.

All images have been provided by the author.