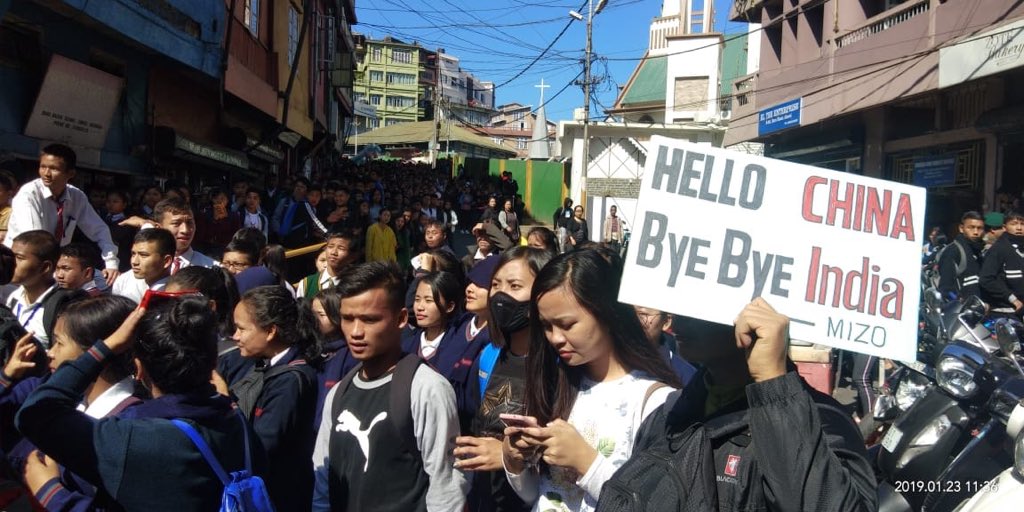 Thousands of students in Mizoram are planning to boycott Republic Day celebrations to protest the Citizenship (Amendment) Bill. On January 22, Tuesday 30,000 protestors from across Aizawl took to the streets to oppose the Bill, burning effigies of Prime Minister Narendra Modi and union home minister Rajnath Singh as they marched.

The Bill, which was passed in the Lok Sabha on January 8, seeks to give Indian citizenship to non-Muslims from Bangladesh, Pakistan and Afghanistan after six years of living here – a big change from the current 12 years – even if they don’t possess identification documents.

The Bill has seen widespread opposition in the north east not only because it excludes the Muslim population but also grants residency and citizenship rights to undocumented illegal migrants.

According to the Indian Express, the reason why the Mizo population is specifically angry with the Bill is that it grants Indian citizenship to the Chakma community –  comprising 10% of Mizoram’s population – who migrated from Bangladesh. Most of the people in Mizoram do not consider Chakmas as part of the state and accuse them of being illegal migrants.

The paper quoted student outfit Mizo Zirlai Pawl’s (MZP) general secretary Lalnunmawia Pautu as saying, “So many Chakmas are living illegally in Mizoram. Everyone will get citizenship if the (citizenship amendment) Bill is passed.” The proposed law, he said, is “extremely dangerous for the people of Mizoram and the Northeast.”

While this rally was organised by student outfit MZP and saw a turnout of over 30,000 people, the All Assam Students’ Union, which led the anti-foreigner protest in the state from 1975-85, organised a similar protest rally in Guwahati on the same day, Scroll reported.

The central government has been constantly ignoring the issue despite repeated protests in and around the country. Pautu also told Indian Express, “We had submitted a memorandum and made repeated demands to the central government to not pass the Bill, because it is extremely dangerous for people of Mizoram… If the pleas of the Mizos are constantly disregarded, then youths will have no other way than to pick up the gun… We might be compelled to pick up arms.”

Also read: ‘Axomiya or Bongali?’ What Growing Up Bilingual in Assam Taught Me About Its Fraught Past

Many students held banners saying, “Hello China, Bye Bye India” – seeking assistance from China and bettering relations with them after being ignored in their own country. Ricky Lalbiakmawia, the finance secretary of the North East Students’ Organisation, told Scroll, “There is a strong feeling among us Mizos that India does not listen to us, does not care for us, and favours illegal migrants over us. So we are starting to think if it is instead better to seek assistance from China, and have better relations with them.”

Some civil society organisations warned to boycott Republic day if the union government doesn’t keep Mizoram out of the bill’s purview. During the protest march, the MZP and Young Mizo Association (YMA) passed a resolution to not celebrate Republic day.

According to the Telegraph, on January 25, a group of students stormed the Rajya Sabha MP Ksh Bhabananda Singh‘s house at Waheng Leikai in Mizoram demanding that he oppose the Bill in parliament. The students also urged all the state leaders, both ruling and opposition, to collectively stand against the Bill.

The MP positively responded to students’ pleas and agreed to oppose it. The Telegraph quoted Bhabananda as saying, “Meeting the students was very enlightening. They wanted to know my stand on the bill. I said as an MP I will stand on the side of the people of my state. I am also a son of Manipur soil. We are in politics for the welfare of people. Our party and the government will not go against the wishes of the people. We will put pressure on the Centre accordingly.”

Prominent student leaders have warned to take up arms if the Rajya Sabha passes the Bill on January 30.