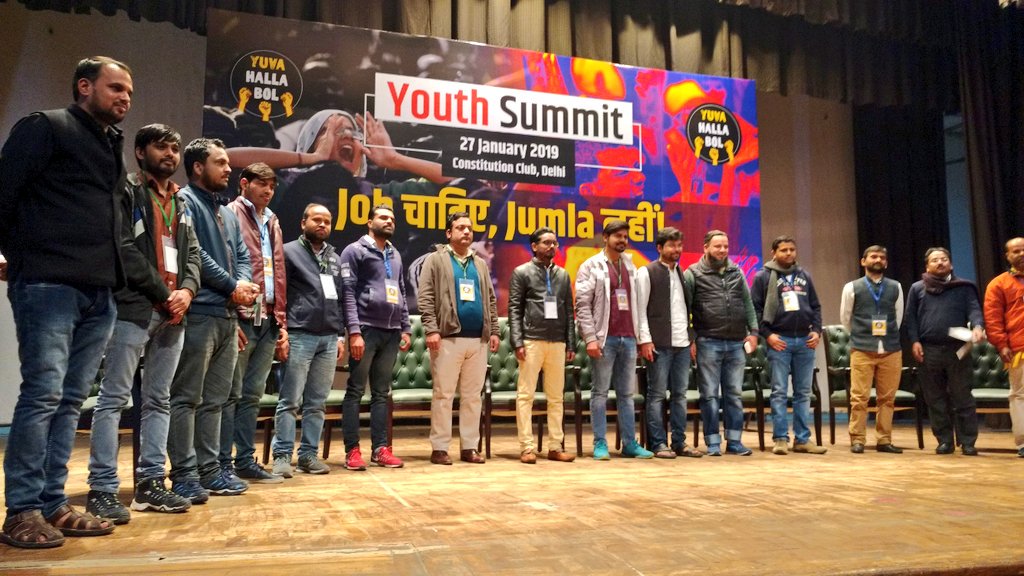 Youth organisations from across the country, on January 27, came together at Constitution Club to protest against depleting employment and repeated paper leaks in examinations. Shouting “jobs chahiye, jumla nahi” (We want jobs, not sloganeering) in unison, they urged Prime Minister Narendra Modi to launch a Pradhan Mantri Cheat Fund Yojana for job aspiring youth who cannot afford the high cost of buying a leaked paper.

Apart from the youth organisations, Supreme Court lawyer Prashant Bhushan and national president of Swaraj India Yogendra Yadav also attended the event to amplify the demands forged by the youth.

Yuva Halla Bol – a nationwide collective against unemployment – organised the meet to give a common voice to the educated unemployed youth and to propose a set of solution to address the crisis. In a letter addressed to Modi, they said, “Today, we write to you with a lot of pain and hope. We want to serve the nation too. We are educated and skilled. There are over 24 lakh vacancies in government sectors. Yet we are not able to secure a job,” Outlook India reported.

The Yuva Halla Bol started out as a movement in March 2018 during the spontaneous nationwide youth-led protests against Staff Selection Commission (SSC) exams in different parts of the country, notably Uttar Pradesh, Bihar, Maharashtra, Karnataka, Madhya Pradesh and Rajasthan.

According to The Wire, the BJP had promised to provide two crore jobs when they came to power in 2014 but failed to fulfil their promise. Slamming the government on this ground, Anupam added, “the BJP was elected to power on the grounds of creating employment in the country, the party has promised 2 crore jobs but the government was failed to materialise its promise”.

Apart from rising unemployment in the country, there have been several cases of paper leaks and corrupt practices in government-held examinations for the past year. According to The Wire, on March 2018, hundred of job aspirants came on street to protest against the alleged leak of SSC exam and demand a CBI inquiry into the matter.

Similarly, on January 5, 2019, UPSC aspirants staged a protest outside BJP president Amit Shah’s residence to demand one more attempt to crack the civil services exam after the abrupt changes in the rules between 2011 and 2015, the Hindustan Times reported.

Also read: After Farmers, Students and Youth to March on Parliament Next Month

The group is demanding more jobs, the implementation of a fair exam code, no more paper leaks and the filling of all vacancies in the public sector.

The organisations have requested Modi to respond to the letter by February 27, 2019.

This is the second time in as many weeks that a student group has lodged a public complaint against the Modi government. Another student and youth-based collective will be holding a march from parliament to Lal Quila on February 7 to oppose the Modi government’s policies on employment as well as education.