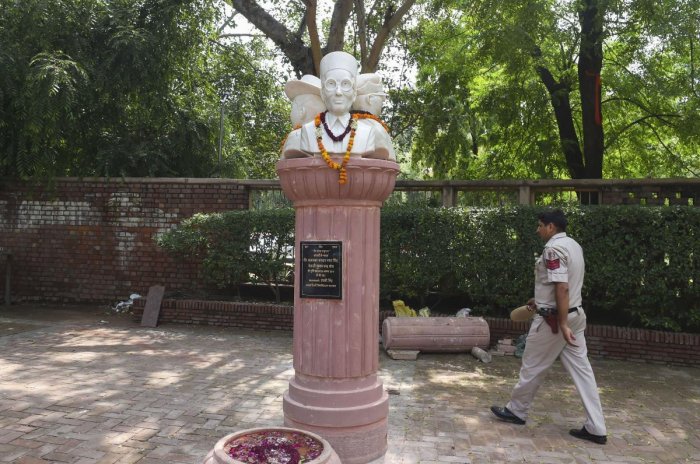 On Tuesday, August 20, DUSU president Shakti Singh installed a bust of Hindutva ‘icon’ V.D. Savarkar outside the Delhi University Arts faculty alongside revolutionary freedom fighters like Bhagat Singh and Subash Chandra Bose. The statue was installed without any official permission from the University, according to DU’s deputy proctor Anupama Jha.

Meanwhile, the DUSU president claims that he approached the university administration for permission. However, as per his own admission, he had to “take this action on his own,” because the administration never responded to his plea.

Many students and teachers have expressed dissatisfaction over this move by DUSU.

Criticising the move as illegal and anarchic, AISA leader Kawalpreet Kaur said that this was a desperate attempt by ABVP/RSS to paint him as a prominent freedom fighter and rewrite our history. “It shows the need on their part to create fake ‘icons’ so as to cover up the betrayal of RSS in the freedom movement.”

Yesterday, almost 20 NSUI activists protested late into the night at the Arts Faculty. On the one hand, they garlanded the busts of Bhagat Singh and Subash Chandra Bose, while on the other they forcefully blackened the bust of Savarkar and garlanded him with shoes. Instead of dialogue and debate, university politics has been reduced to vandalism and jingoism.

Moreover, it has brought the politics of statues into university spaces.

This incident happened on the last working day of DUSU – just 20 days before the next student’s union elections. Earlier this year, another life-size statue of Swami Vivekananda was installed inside the JNU campus, again without permission from the JNU administration.

“A dangerous precedent is being set in our campuses. Toxic television debate discourse is coming to the university. Politicians can say or do anything and get away with it. Students can create ruckus in the name of nationalism, construct and demolish a symbol or property illegally. Mark my words, no action shall be taken against them. Lawlessness is the new law,” says Vipul Kumar, a third-year student of Journalism.

Clubbing Savarkar with Bose and Bhagat Singh as a revolutionary has been an unrealised dream of the RSS for a long time. To appropriate him, on the one hand, we see that an imaginary rivalry is being crafted between Patel and Nehru, Gandhi and Bose, and Bhagat Singh and Gandhi.

On the other hand, a fake alliance is being forged between the icons of Hindutva and Bose, Patel and Bhagat Singh. There is hardly anything ideologically common between Bhagat Singh and Savarkar or Bose and Savarkar.

Why is Savarkar a controversial face?

On the other hand, Bhagat Singh, a staunch communist, laid down his life against Imperialism, fought communalism and dreamt of a free, secular and egalitarian India. Bose also strongly criticised and opposed communal parties like the Hindu Mahasabha.

Ironically, Savarkar was the president of the Mahasabha when he gave his own version of the two-nation theory and an anti-secular Hindu Rashtra. Sardar Patel, an unusual jewel of the BJP’s eye’s banned its parent organisation, the RSS, after the Mahatma’s assassination. Unlike Bhagat Singh or Bose, Savarkar wrote mercy petitions to Britishers, declaring his active support to the cause of British Raj in India. His organisation opposed popular anti-colonial struggles.

As per the official archives, Savarkar and Nathuram Godse, Gandhi’s chief assassin, had developed very close links in the years preceding Mahatma Gandhi’s murder. In fact, Savarkar was one of the eight persons charged for the murder of Mahatma Gandhi. Due to a lack of concrete evidence, he was acquitted. However, he was posthumously found guilty by the Justice J.L. Kapur commission.

‘Hindutva’, the social, cultural and political doctrines of Hindus propounded by Savarkar, has been on the BJP’s agenda since the last three decades. Now when it enjoys its unprecedented super majority at the Centre, Savarkar is getting his long due. Books, articles, films and videos on Savarkar, painting him as an icon are awash on the internet now. Recently, two books glorifying Savarkar were launched.

At the same time, we see that Jawaharlal Nehru and Mahatma Gandhi – the heroes of a secular India – are under a vile maraud campaign like never before. A violent mob is present everywhere to lynch their idea of India.

It is not new for the BJP and RSS to appropriate stalwart leaders of the freedom struggle. Besides Sardar Patel, (the then Amit Shah to former Prime Minister Pandit Jawaharlal Nehru), whose sky-scraping statue was erected last year by Narendra Modi in Gujarat, the BJP has been roping-in other leaders of the freedom struggle quite regularly. However, they need their own faces from the past as well.

Since Hindutva has its own limitations (although quite understandable), because of the poor participation/ absence of its advocates and at times even of their opposition of the national movement, promoting and teaming up Savarkar along with revolutionary icons like Bhagat Singh and Subash Bose may just do the job for them.