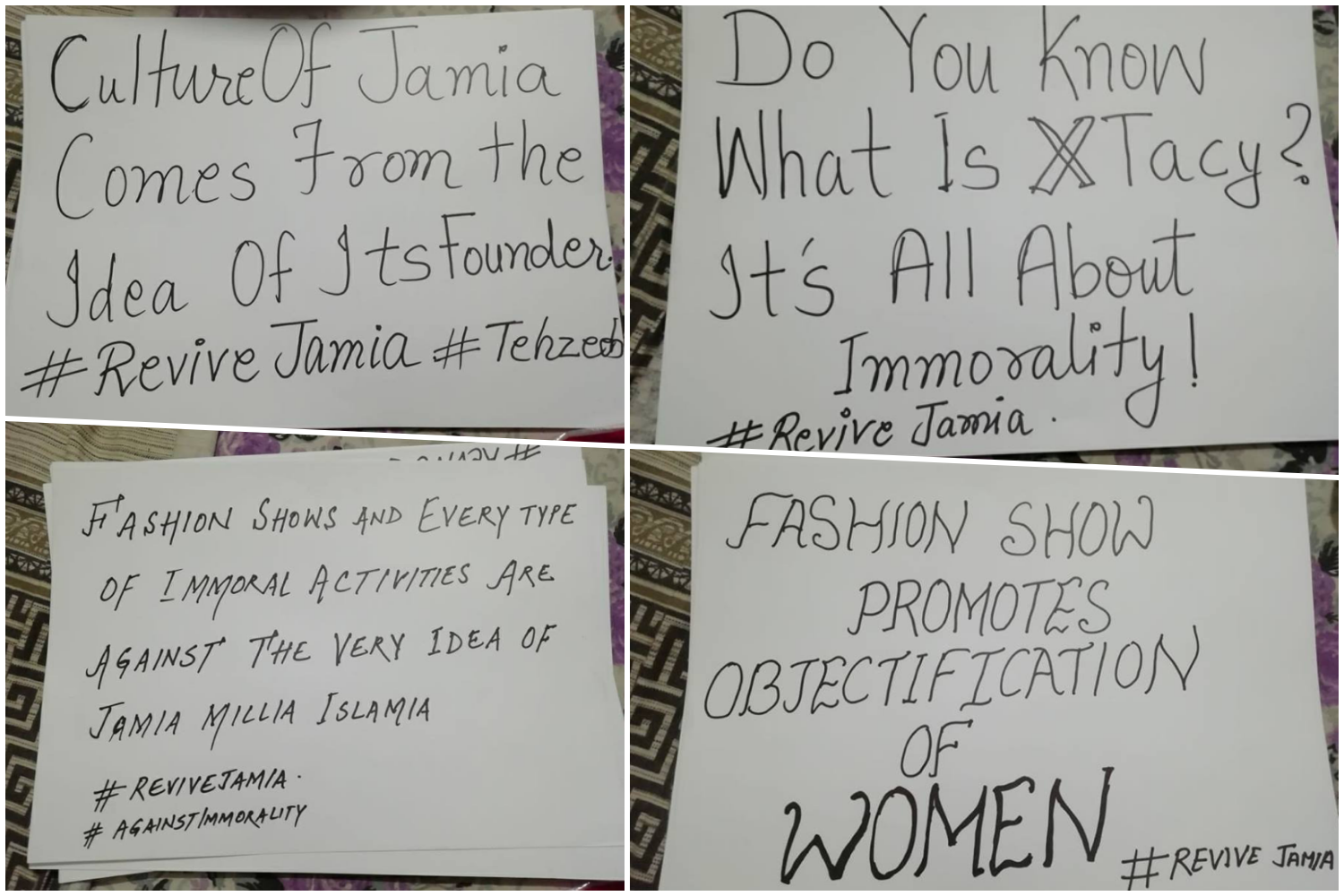 On Saturday, students at Jamia Milia Islamia were in their usual festive spirit, preparing for a fashion show. It was the Engineering department’s annual fest ‘Xtacy’.

Suddenly, a group of 10-15 men entered the venue and staged a “peaceful” demonstration to disrupt the event and, eventually, the organisers gave in and called off the fashion show.

“I have been a student at Jamia for the past four years and never have I seen such intolerance materialise. We’re a central university and students have all the right to exhibit their talents and no activity, which is socially acceptable, shall be stopped in the name of religion,” said Sahar Rizwi, a student of Jamia Millia Islamia.

The group of protesters go by the name “Students of Jamia” on Facebook and claimed that this was a “symbolic protest” against the administration for allowing a fashion show which, as they say, goes against the “ethos” of the university.

“We believe that most Bollywood songs and fashion shows objectify women and hence we are against it… we didn’t have anything against this specific event. We had a dialogue – we explained our position to the faculty of the Engineering department and upon listening, they agreed to cancel the event and that was it,” said Mohammad Amanullah, a second-year MA student of international relations, who was at the forefront of the protesting group.

Furthermore, they also said that they did not resort to any violence to stall the celebration.

“There was no case of violence or intimidation by us to cancel the event, we were simply having a peaceful demonstration showcasing our disapproval [of] it. Things are being blown out of proportions to malign Jamia’s image. We shouldn’t be stigmatised simply for our ideologies,” said a student who participated in the protest.

However, the organising committee of Xtacy claimed that the protest group threatened to beat them up had the fashion show taken place as planned.

Also read: Protest in Jamia Against Professor For Assaulting and Threatening Students

A statement by the Xtacy team read:

“A few days before the event, we got a call from the so-called “Students of Jamia” asking why we’re doing this fashion show. A university which has ‘Islamia’ in it shouldn’t have anything to do with such events, they said. We didn’t pay much attention and simply asked them to talk to the administration if they had any problems with the events. They replied by saying, if we wanted, ‘we could have set you straight by beating you up’.”

Shireen Khan, one of the organisers of the event, said that the protestors were shouting at them when they entered the venue.

“Those guys didn’t come in peace or to have a dialogue but to impose their ideologies on us. They believed it was regressive and sexist to host a fashion show. They were constantly yelling “Khuda maaf nahin karega (God will not forgive you)” at the organisers to shame them. The department gave in to their demands only because we didn’t want any safety concerns for the participants,” she said.

She then added, “Those people are so disengaged from the idea of bodily autonomy and consent that they don’t understand one simple thing – that women who go up on that ramp and walk chose to for themselves. You can’t ask us to give up our choices and impose your ideas of ‘equality’ on us.”

Subsequently, the committee conceded to the protestor’s demands in order to avoid any further chaos in the university.

Students from other universities – who had come to take part in the fashion show – were shocked with the abrupt cancellation.

Aarti Uniyal, a student from Indira Gandhi Delhi Technical University for Women, said “I was ready to perform at the event [and was] all dressed up when I realised that there were protests going on because of the fashion show. They were calling to [protect] Jamia’s “culture” from such events. It was hard to believe.”

The group has previously received flak on social media for organising an event in October last year, advocating for gender-segregation in the wake of the MeToo movement, led only by men.

Jamia students suspect that this protest might affect the turnout of participants from other universities.

“It [ the fashion show] was hosted by the Engineering department and they were representing not just themselves but the entire university. I am sure word has spread in fashion societies in different colleges by now and the fashion show that was scheduled for next week in Ecocracy [annual fest of Economics department] will be a disaster,” said Ishan Kakkar, an ex-Jamia student who was invited to host the fashion show.

Jamia’s Public Relations Officer Ahmad Azeem said the dean at faculty of engineering and technology hasn’t given a formal statement on this yet and an official comment was unavailable.

Ismat Ara is a Mass Communication student at AJKMCRC, Jamia Millia Islamia. Whenever she’s isn’t reading books or watching movies, she is critiquing them. At other times, she can be found writing about college campus and gender-based issues.