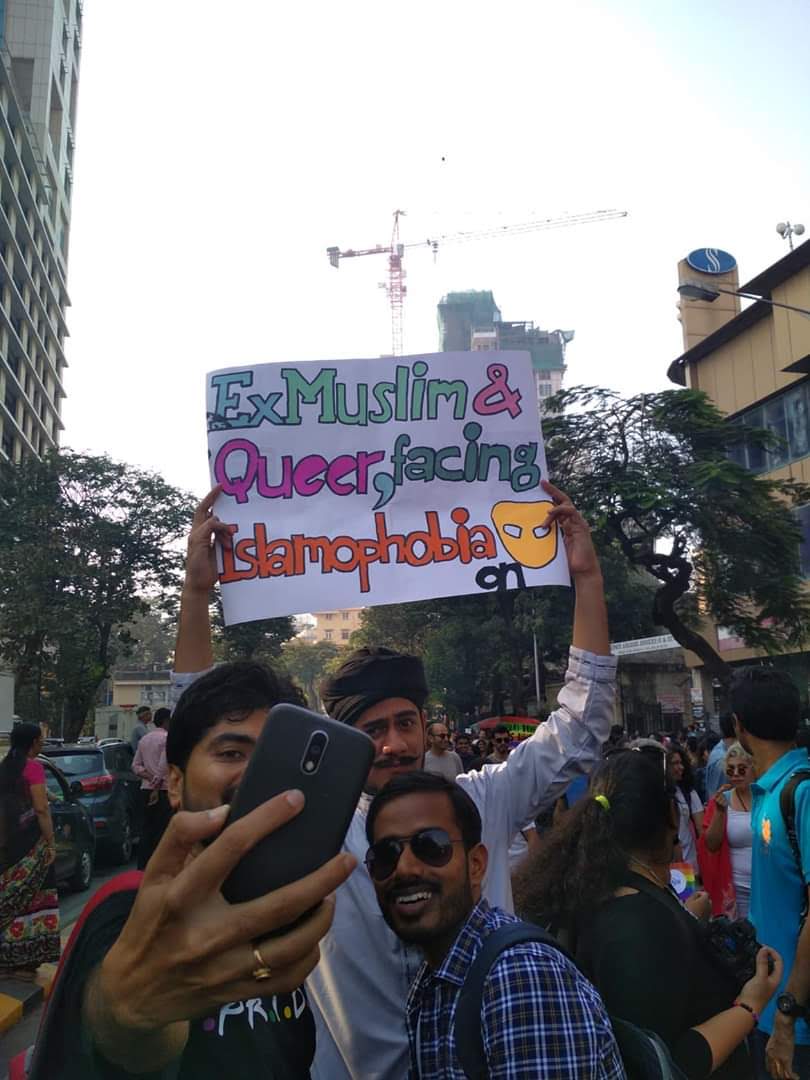 Coalition work is not work that is done in your home. Coalition work has to be done in the streets. And it is some of the most dangerous works you can do.
~Bernice Johnson Reagon

Reagon’s concept of ‘coalition politics’ talks about the dangerous, often underrated, task of coalescing for a cause. Underrated, because it requires engaging with differences instead of burying them, thus stifling the possibility of a revolution. Because that’s what happens when you created closed rooms filled with people similar to yourself. The comfort provided by your shared privileges/capital prevents you from engaging with differences – crucial to challenge your politics.

Movements happen when we do the difficult task of getting on the streets with our vulnerabilities, our strengths, our differences and have a dialogue about our politics with other participants.

And get on the streets, literally and figuratively, is what we did at Mumbai’s 11th pride march on February 2 – with our heads and hearts aligned towards each other, recognising the coalitions built over decades of relentless activism, and celebrating the spirit and labour of the process that coalition-making is.

Last year’s Supreme Court judgment, when Section 377, criminalising sexual activities between consenting adults of the same sex (termed as being against the order of nature), was quashed, paved the way for this year’s theme, Pride For All. Accounting for not only the strenuous efforts of the LGBTQ+ community and allies towards the legal victory but also for intersectionality within the community.

The march, led by Queer Azaadi Mumbai (QAM) which is a collective of organisations and individuals voluntarily working for LGBTQ+ rights, chose August Kranti Maidan as the assembly point for this year – which was saffroned by flyers from the ruling party, BJP, for a rally scheduled for the following day.

The party’s unnerving silence and sometimes outright rejection of the LGBTQ+ community, made the rainbow and saffron mix an ironical sight for marchers.

Led by a giant pride flag and QAM banner, the march commenced at 4pm, and with the help of police and QAM volunteers taking care of the traffic, rainbow-ed its way to Opera House, Kennedy Bridge and back to August Kranti Maidan, where we parted for several post-pride parties with hopes of an inclusive, rights affirming future expressed with the collective singing of ‘Hum honge kaamyaab, ek din’ (We shall overcome someday).

Also read: I Am so Gay Today: On Coming Out of the Closet

This year’s pride, claimed to have had the largest number of attendees in the city’s pride march history. In addition to observing a sense of accomplishment, there was a list of demands compiled by QAM, which were vocalised before and after the march.

One of the demands was to have the revised (yet inaccurate) Transgender Persons’ (Protection of Rights) Bill conform to the 2014 NALSA judgment.

Also read: Here’s Why the Transgender Community is Angry About This New Bill

And with Section 377 gone, legal and social demands for protection of queer and trans folks from violence and discrimination, of adoption, inheritance, marriage, were proposed. Pride marches, we should not forget, are as much a celebration as they are a public protest against power-based hierarchies, and these demands are a proof of how much work has to be done still.

And this, I think, was the beauty and courage of this year’s pride. Brimming with voices across the spectrum and along the intersections of gender, caste, religion, ethnicity; Mumbai’s Pride goers really acknowledged this year’s theme. Queer folks who were Muslim, Christian, Bahujan, raised banners and slogans directed others towards the need for adopting an intersectional lens when discussing gender and power.

Identities and power are central components of all politics, and to have more people acquainted with the multiple axes of oppression on which power operates, is a requirement for building an inclusive and humane politics.

But the road to inclusivity and equality is not a linear one. On one hand, Mumbai pride resonated with the hope of furthering intersectional politics, on the other, the anxieties over the upcoming Lok Sabha elections and the elected government’s approach towards the rights of the community, remain.

Whether it’s BJP members claiming queerness is against Hindutva and needs a “cure”, or the silence of both the Congress and BJP over issues concerning the community, it’s going to be a fight for substantive equality.

I, for one, am hopeful after attending Mumbai’s first pride, because the revolution, my friends, is here and it is rainbow and intersectional!

Shubhangani Jain is in her final year of masters studying gender/power. She is a pop-culture and panipuri enthusiast.