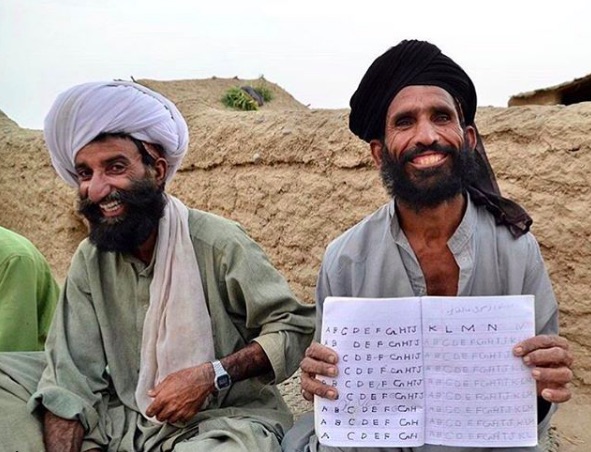 It’s only been a year since Anas Saleem moved to Lahore to pursue his graduate studies and began photographing the streets and people of Lahore. Saleem, who moved to the city to pursue graduate studies, was irritated by western and Indian publications’ portrayal of Pakistan – too preoccupied with the stereotypical issues of political tension and violence. An interest in changing this perception of his country prompted him to start a project called Everyday Pakistan to share photographs of the rarely-seen parts of daily life. Since then, he’s acquired over 57,000 followers on Instagram alone, including thousands from India.

“The main reason I created this project is to fight the stereotypes and show the inside of Pakistan – that what’s happening in a house, school or a street,” says Saleem. He’s not the only one working on this project – Anushe Noor, a columnist and writer helps manage the project’s website.

“I used to read articles from western publications, and even Indian [ones], which were only about politics or violence in Pakistan,” says Saleem. One day he came across a social media page called Everyday Mumbai. After spending some time scrolling through – and impressed at what such online projects could achieve – he searched for similar projects from Pakistan. However, he came up blank. There were no projects or accounts which showed the everyday life and times in Pakistan – the view of the street, the everyday life of its ordinary citizens, its men, women and children, their triumphs and struggles.

So, Saleem decided to create an Instagram account and started posting photos of regular Pakistani life, sharing his own work and that of other photographers in the country. In addition to documenting daily life in Pakistan, Saleem has also built a community of storytellers through Instagram.

Everyday Pakistan has grown by leaps and bounds since it’s very beginning. Saleem says he started getting positive feedback just ten days into starting the project. Notably, several of these encouraging responses came from people living all over India. The first person to congratulate him on the project was the Indian photographer Chirag Wakaskar, recalls Saleem. And later other people running similar projects started following the page as well. “When Everyday Mumbai shared our project in a post, my notification were flooded and every second day there was another follower from India,” he says, adding that he started receiving messages every other day from different people living in Indian cities like Mumbai, Hyderabad, Delhi and Lucknow.

In addition to dispelling stereotypes, Saleem has also enabled people to reconnect with their roots. One day an Indian follower messaged him saying that she’d showed her 85-year-old grandfather the picture of the Katas Raj temple in Pakistan that Saleem had posted on Instagram, and now he wanted to speak to him.

“She shared her contact number and I promptly called her. She was very happy and connected me to her grandfather with whom I first started talking in English but eventually switched to Urdu and Punjabi,” says Saleem. “He shared with me stories from before 1946, when as a youngster he used to visit the Katas Raj temple. He spoke of his desire to visit his hometown in Pakistan but due to the prevailing political situation, it was difficult to procure a visa. He felt good and thanked me though for connecting him to his city Chakwal.” For Saleem, it was “one of the best days since I started this project.”

Everyday Pakistan has since attracted thousands of followers from the Indian side of the border.  “I just love this page, your posts are really very interesting!,” an Indian follower commented on one of the posts. Continuing, “As an Indian I feel that your page gives us an insight about the reality of Pakistan and because of that our love for this place keeps on increasing.”

“I love your page and so does my mother and nani who migrated to Lucknow after the partition,” wrote another woman from India. “She loves seeing [a] bit of her Pakistan. We love what you do and the love you show to India.” Saleem says he has started receiving such messages more often now, which motivates him to keep at it.

Saleem is now thinking beyond Instagram, and wants to expand Everyday Pakistan into a project that schools can use for educational purposes. “Photography can bring a change and fight stereotypes,” he says, adding that students can benefit from using storytelling in their daily lives. “Our part of the world (south Asia) has been thought of as a place of poverty and violence by many in the west,” he adds. “Online projects like Everyday Pakistan can help change this thinking.”

Given the hostile climate between our two countries, Saleem says there is a definite need for online initiatives challenge and change people’s general impression of Pakistan, especially regular Indians. “Many Indian users [have told] me that they want to visit Pakistan because Everyday Pakistan changed their minds about this country which the Indian media has portrayed in a different way,” he says.

Saleem continues, “I think a project like Everyday Pakistan can help connect both the communities living across the border because we are all alike despite all our differences.”

Majid Maqbool is a journalist and editor based in Srinagar.