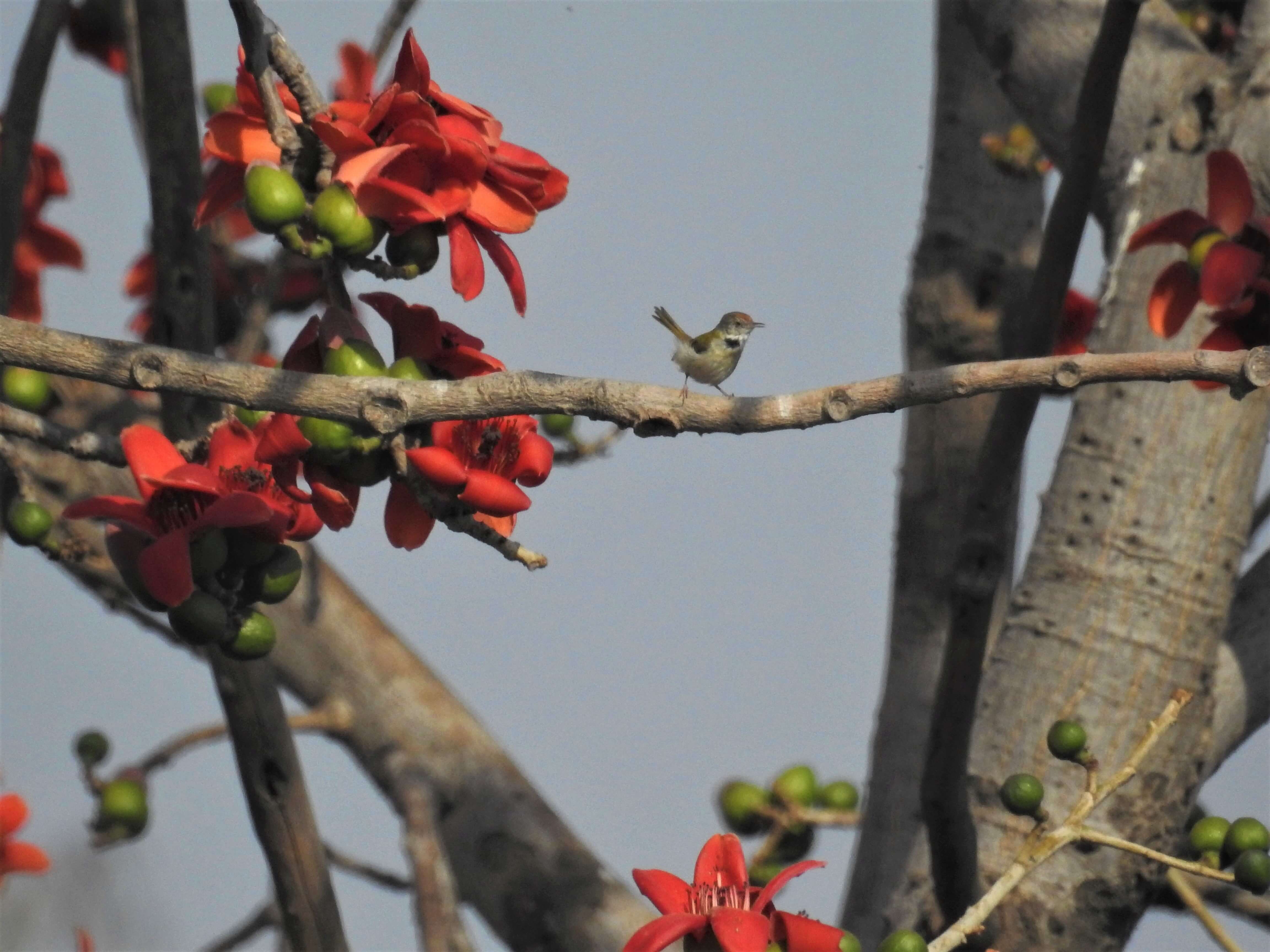 Only once a year, a tall tree with thorny bark bursts dramatically into blossom. In red, orange and yellow variants, the flowers seem to be on a cheerful rebellion against Air Quality Indexes above 200, apathy and road-widening stresses. The Silk cotton or Semal tree defies the expectations you would normally have of a tree in the city. Not only is this native tree doing well in struggling, dry Delhi, it heralds spring – through the annual phenology of its blossoms – bringing scores of birds out and about.

Usually, what is horticulturally beautiful may not be ecologically sound. Rows of violet jacaranda or profusely-flowering Lantana may be vivaciously florid, but are non-native or invasive species and discouraged by ecologists. The semal passes on both counts of being a Delhi native as well as being breathtakingly beautiful. It sheds its leaves completely while heaving forth its blossoms – which are huge and gaudy, possessing a simple symmetry even the pickiest of landscapers would like. Once the tree is done with flowering, it breaks out into cotton pods, which waft magically in the clogged air. If a large flowering tree is a keystone in the ecosystem, equally it can be a harbinger of a sense of place.

I took pictures of a semal tree in Vasant Kunj for over fifteen days at the same time each day –between 6:30 to 9:30 AM. The tree I chose was a representative of Delhi – growing upright in a human-dominated, nutrient-poor environment. The findings confirm what I thought as a child – the semal has an effervescent quality of attracting not just human admirers but also several birds and insects. Observing the semal is also understanding ecology and inter-relationships – I spotted more than ten bird species, but I also saw interactions between different bird species.

The collective noun for crows is murder. Murders of crows were regularly spotted, but despite their snarky reputations, the crows did not harangue other birds – like various kinds of mynas, pigeons and barbets. There were several types of starlings or mynas on the semal – common mynas (with a bandit like yellow band on their eyes), brahminy mynas (named after the ‘choti’ or tuft of hair they have, similar to the one some male brahmins keep), pied mynas (black and white with orange bills) and rosy starlings (rosy pink, white and black), who migrate to India from Europe. There were two types of barbets – the brown-headed barbet and the coppersmith barbet, and two types of pigeon – the yellow-footed green pigeon (a tree-loving bird) and the blue rock pigeon (which nests closer to people, and usually on buildings). Grey hornbills, rose-ringed parakeets, oriental magpie-robins, paradise flycatchers and rufous treepies also visited. The size range of birds the semal supports is wide – from the tiny purple sunbird and oriental white-eye (8 centimetres long) to the huge peafowl. While several birds fed on the semal flowers, others used the crown of the tree as cover, while negotiating their way through the built landscape.

Coppersmith Barbet on the Semal

For me, the semal is a sense of place, which is otherwise marred by a shifting baseline. While certain remnants of ecological heritage and knowledge remain in Delhi – such as people selling coconut cream and water and cooling ‘chiks’ on the side of the road – most other ‘natural’ recollections are now just memories. Growing up in Delhi, I saw vultures which have now completely disappeared, and sparrows that have sharply reduced in numbers. Studies have confirmed the worst suspicions – we are witnessing several local extinctions and plummeting populations of species. In the houses I grew up in, wasps made white nests in plug points, crickets and termites flew giddily inside our rooms after monsoons. I don’t see crickets, blister beetles, and the wasp and ant diversity that I saw as a child. One thing that has remained though, is the semal.

Grey hornbills dart in and out of the semal in the ancient Humayun’s tomb complex. In central verges and road dividers exhibiting Delhi’s plummeting Air Quality Index and Respirable Particulate Matter, the semal manages to grow – and thrive. In places where trees branches have been carelessly lopped off – to make way for signboards, lampposts or red lights – it survives. It may not outlive all of Delhi’s infrastructure plans though. Close on the heels of a contested proposal for ‘redeveloping’ Pragati Maidan, which will involve cutting hundreds of trees, more road-development projects are being executed. Citizens have fought to save old trees on Aurobindo Marg which the government wants to cut for road-widening, a proposal which may still come through. Another plan is in the offing is to cut over 2,000 trees – including the cheerful semal – between Dhaula Kuan and the international airport. Still, as planners hasten to widen roads, the semal shelters an arboreal arena of life.

A look at this tree in flower could give occasion to take pause and reconsider what we think we know. Firstly, one may completely miss this tree – and subsequently, its ecological importance, when it is not in flower. Secondly, semal-watching provides a window to see wildlife for long periods. For instance, you may notice that the usually dull looking brown-headed barbet has brilliant emerald wings. The nimble coppersmith barbet has an eye-popping yellow eyebrow. The sedate, almost no-colour laughing dove looks roseate pink in the early morning light. Species like the purple sunbird and rose-ringed parakeets are courting at this time of the year. While wind itself has no colour, it reveals different dimensions of birds on a tall tree. The cold wind of early March mornings ruffles the feathers of a collared dove, making them look like scales, and a familiar bird suddenly looks wild. A yellow-footed green pigeon turns its head and looks at me, and I wonder not what I think of it, but what it thinks of me.

The semal means so much to many species. An important source of food and sustenance as the days get hotter. Yet it may be just another trunk to be cut for road-widening projects or another statistic for ‘compensatory plantation.’ As agencies claim repeatedly that they will plant “ten times” the numbers of trees they cut in Delhi, one wonders whether these forests will just be on paper. Or perhaps, just in memory, like nostalgia-tinted mental postcards of vultures in Central Delhi.