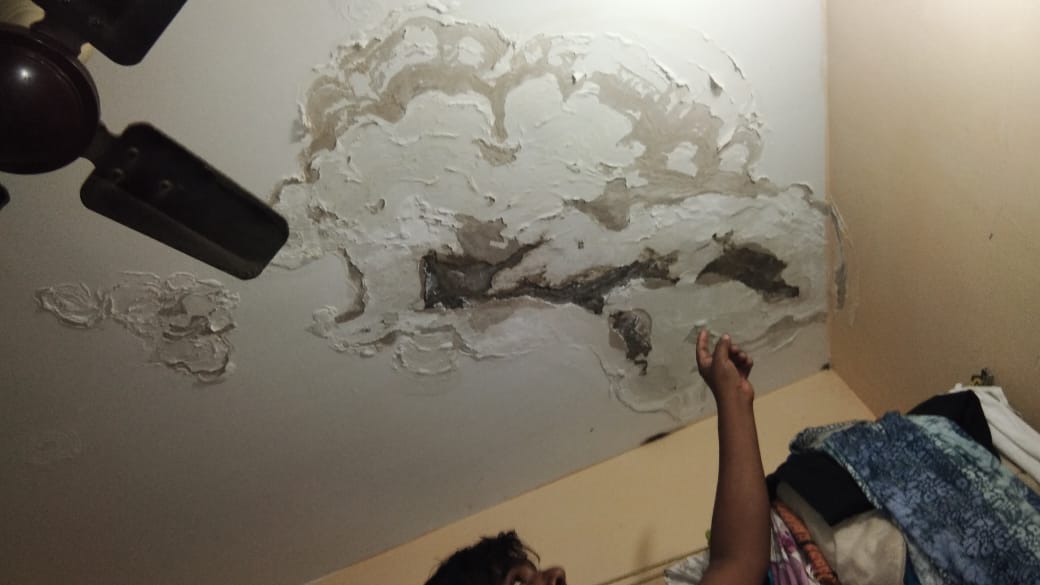 She’s not from some drought-prone village in Maharashtra, but from our very own Mumbai.

She was complaining about the much-criticised Mumbai Slum Rehabilitation Authority (SRA) scheme – a government of Maharashtra scheme that allows private bodies to develop their own housing projects if they build in situ pucca housing for those living in slums like Dharavi.

More than 60 women residents of the SRA project at Amar Mahal and Chembur have been holding a sit-in for more than 200 days against a 16-storey ultra-luxury project that has left them homeless. On Friday, July 26, the protest entered its 238th day prompting the state’s housing minister Ravindra Waikar to meet the protestors. He has reportedly assured them of relief within a week.

Panchsheel Nagar slum is situated near the Eastern Express Highway on the Tilak Nagar side of Amar Mahal. The slum was allotted a new building under the SRA scheme. SRA authorities handed over the contract of the building to Arihant realtors and Ashapura developers. Out of 870 slum dwellers, 700 were eligible to get homes under the SRA scheme.

The protesters allege that the developers built only 560 homes and erected a half-constructed 17-storey building with five wings with no plan for the rest of the houses. As for the rest of the people who were rendered homeless, they were then told to stay on rent and were promised by the builders that they will pay their rent till the time construction of their houses in the new building gets completed.

It wasn’t much of a surprise to know that the builders haven’t paid people their rent for months – and some for even a year – amounting to constant distress and harassment for the families who do stay on rent.

The constructed building itself is so structurally unsound and pitiable that it makes a mockery out of the people who were given those flats. It’s hardly been three years since the building was constructed and it has already started leaking water. The residents believe that during the monsoon, the situation will certainly get worse.

“If it leaks during the summer, the monsoons will surely be a living nightmare! The water supply system is faulty to a level that we hardly get water for ten minutes and the rest is lost to leakages,” a frustrated Murari Thakur said. “We have our grandparents with us; the toilets are so small that they can’t even get inside!” he added.

Recently, society resident Raju Makaskare – husband to one of the protesting woman – died on March 21. The protestors have accused the builder of harassing Raju and not paying his family the promised rent on time. They have filed a police complaint regarding the same.

However the suffering doesn’t stop there for the residents.

85% of the people in Panchasheel Nagar are Buddhists and belong to a minority community. Their community has been denied a space for worship which was promised after the builders demolished two Buddha Vihars of approximately 900 sq. ft. and 1,100 sq. ft. in order to construct a new building. The residents say that it has been deliberately done by this government to target minorities.

Santosh Sanzkar, a high court advocate fighting the case for residents of Panchasheel Nagar, said, “This struggle has not started overnight: we’ve been fighting on many fronts but did not get an appropriate response from anywhere. That’s when we decided to start our fight on the ground. Builders and the government have worked hand in glove to create this mess. The builders should be jailed under the Atrocity Act for deliberately oppressing people from lower castes.”

Talking about the media coverage of the issue, Sanzkar added, “Some print media outlets have given us coverage, but TV media has been pocketed by the builders. They don’t want to telecast anything against the builders because that’s where they get their funds from. If the media is not going to voice out people’s problems then what is the use of such media?”

“Mumbai Police’s behaviour is also very suspicious,” he said. “Last month, the builder’s goons attacked the protesting women. When we went to the local police station to register our complaint, instead of arresting the attackers, the police registered FIRs against the protesting women!”

Sanzkar couldn’t hold back his anger.

A notable aspect of this struggle is the participation of a large number of women. Women who perform daily household work have been bearing the brunt of the faulty construction of the building. With no water, airtight spaces and no ventilation, women claim that it is near impossible to do their work.

While entering Sakhra Bai Thorat’s house, I saw plaster peeling off from many spots on the roof. “Water leaks in every room, the toilet is built near the kitchen, and on top of that, there is no ventilation – we can never see sunlight in our house. I am 80-years-old and I don’t want to spend my last days like this! Our slums were better than these houses.” she told me with tears in her eyes.

With state elections around the corner, every candidate from all the major political parties is visiting the protestors. Upon asking whether elections will help their cause, Sanzkar said, “It’s good that at least the elections have moved these politicians to do their work. I have some hopes from the government, but if they fail to stick to their promises, we will intensify our protest and our Zansis [women protestors] will fight till the end for their rights.”

With every second citizen of Mumbai living in slums, the SRA scheme was supposed to make a major infrastructural change in the city. However, the change has been far from positive for thousands of slum dwellers for whom living conditions have just gotten worse. Instead, the SRA scheme has become a breeding ground for corruption of politicians and builders, marked by blatant disregard for human life and dignity.

We have tried several times to contact the developers but but are yet to receive a response.

Hrushikesh Nandkumar Patil is a 22-year-old environmentalist and social worker who aspires to pursue journalism and law to serve the poorest of the masses.