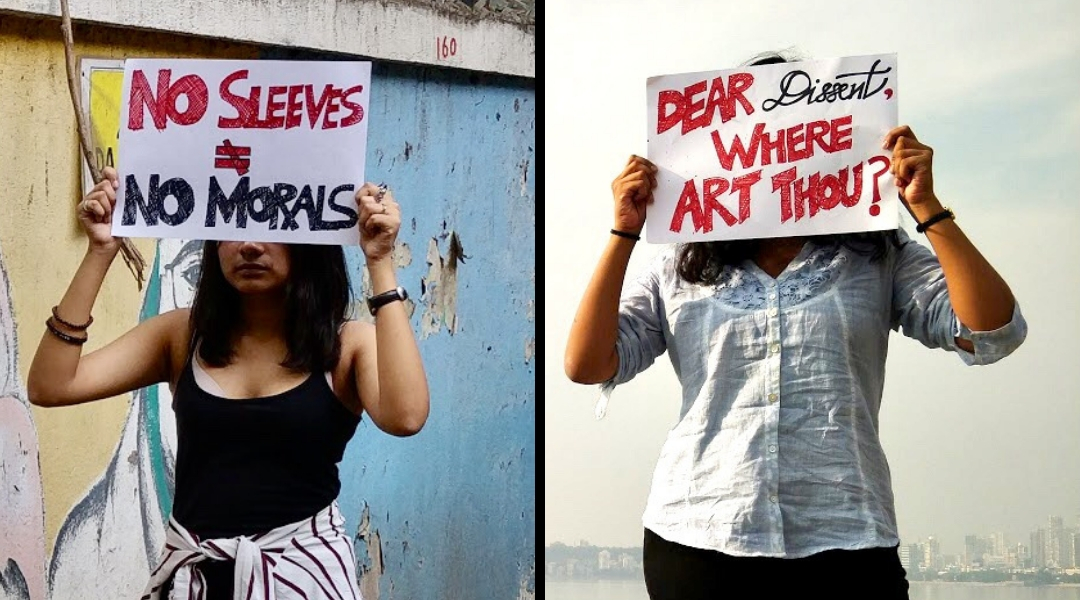 From Delhi University to Raipur’s Hidayatullah National Law University to Hyderabad’s Tata Institute of Social Sciences, Indian campuses are ablaze with protest right now as students everywhere stand up against moral policing. Amidst this national upheaval, the one place that remains curiously silent is Mumbai. Students and alumni all say moral policing and shaming is rampant in the city, so then why are Mumbai’s college students silent?

‘The city has internalised moral policing’

“Mumbai’s monsoon can be merciless. On one such rainy day, my friend and I came to Xavier’s gothic gates waddling through waterlogged streets. My friend had up-folded her denim till her knees in order to avoid getting wet. To our horror, she was stopped at the college gate for infringing the dress code,” says a postgraduate candidate in public policy at St. Xavier’s College.

For most Indian students, education comes with a heavy dose of patronisation. Credit: Mitali Muralidhar

Narratives such as these are not standalone incidents. Dinesh Mourya, a former student of South Indian Educational Society (SIES) College narrates a similar incident, “Two senior professors once mocked me for wearing earrings in both my ears. They took a jibe at how I wanted to be born as a girl, but became a boy instead.”

Even administrators agree with students’ assessment, saying moral policing has become part of the city’s fabric. Ritu Dewan, former director, Department of Economics, Mumbai University said, “I have been associated with the university for over 40 years and I have seen/experienced all kinds and forms of moral policing being practised in colleges as well as university campus. This city has internalised moral policing.”

Also read: The Days of Authoritarian College Administrators Are Over

This internalisation also appears to be a classic case of normalisation – students are conditioned to not find a problem with moral policing. If, somehow, some students wake up to the problem and start questioning the system, they are instantly silenced. “A nun once threatened a fellow classmate of mine to burn all her clothes if she ever wore a sleeveless top again. This was enough for the rest of us to never wear one anymore,” recounts a recent graduate of Sophia College.

In Mumbai, college administrators often leave students out of the picture while making rules for students. For reasons unknown, they are seldom consulted while creating rules and regulations that matter to them the most, for example, a college’s dress code. Gayatri Lele, lecturer at Ruia College says, “Rules are inescapable, but they have to be just. Creating a rule overnight without taking all parties in confidence is unjustified.”

“Ruia conducts an annual inter-collegiate Rose Day. This year for some reason students were not allowed to wear sleeveless clothes. Generally, we don’t have a ban on sleeveless, but banning it for one particular event seemed arbitrary,” she adds. What is more of an eye-opener is the staggering lengths to which authorities can go to ensure the rules are followed. A second-year BA student of the same college recalled that the vice principal herself was standing at the gate inspecting students’ clothes.

Also read: #NotMyVC: Why We, the Students of HNLU, Want Our Vice Chancellor to Resign

Rules about dress codes and student conduct vary widely from college to college since administrators get to pick and choose what they want to impose on students without any oversight. These regulations are not made randomly, instead they are rooted in deeply set, long-established ideologies that are personal, not institutional.

Audrey D’Mello, programme director and legal expert at Majlis notes, “There is a lack of accountability at the bottom and will at the top to regulate. This empowers colleges to establish rules on their own volition and whim.” According to the Indian Express, Mumbai university maintains that there is no university rule that colleges must impose a dress code. The university seems to recognise the wide problem faced by the students but shows no will to keep campuses in check and stop injustice.

Authorities justify their actions, saying they’re concerned for the students’ own safety and want to maintain on-campus discipline, but students don’t buy that argument. As one student of sociology from a south Mumbai college pointed out, “If there are concerns about students’ safety, it makes more sense to place guards or inform the police or set up security cameras than to tell students to dress in a particular way.”

Vyshnavi Sundararajan, a third-year BA student at SIES adds, “My college has a board at its entry stating students/visitors are requested to dress decently. Isn’t decency an unfairly vague term to use? Decency is very subjective.”

Somehow decorum has been reduced to how one dresses or who one talks to. “A simple act of hugging a male friend was exaggerated and assumed to be illicit. I was even disgraced in the staffroom,” says a recent political science graduate of Ruia College on condition of anonymity.

Also read: How Free Do We Want to Be?

Administrators themselves seem divided on what constitutes ‘decorum’ and students’ ability to comply to it. “No rule or regulation is made unless the need for it arises,” says Rashmi Bhure, Head of the Department of Politics, SIES. Then she adds, “Will you enter a swimming pool wearing formal clothes? Nowhere will they allow you to enter a pool without a swimming costume.”

On the other hand, Sanhita Joshi, assistant professor of politics, Mumbai University says, “It is rather childish to think that students would end up in bikinis for the class in the absence of a ‘moral code’. I think we are dealing with adults in colleges and we need to trust their sense of decency.” Most students think – If the state can trust us with voting rights, why not the college with our clothing choices?

Where silence is golden

Students discuss moral policing in hushed tones, vent about it in their circles, endure it or let it go. It is not that they cannot dissent but they have been conditioned into choosing silence. Our idea of ‘normal’ is being morally policed and this process starts in schools itself. Amongst several other students from different schools, Hiral Satra, a former student of J. B. Vachcha School, recounts her teachers regularly checking skirts to ensure girls wore bloomers under them.

Subsequently, students learn to suffer flawed administrations as soon as they enter school. As a response, they either circumvent rules or create peer groups that help them adapt to the status-quo. Referring to the failed social media campaign against the ban on ripped jeans in Xavier’s, a third-year BA student makes an interesting point, “Students do have enough frustration about what happens with them. But they don’t have any agency to voice their concerns; social media is our last solace and hence college memes go viral. Memes are a way to laugh it out and make the campus tolerable.”

Fear of administration is another major reason why students don’t voice their concerns. Yash Kumar from Terna Engineering College says, “I have been trying to grow out my hair right now. But one professor warned me to come with a military cut or else I’ll be thrown out of the college.” Consequences for dissenting include cancellation of attendance, unfair assessments and other reactions.

The general secretary of a leading college in central Mumbai told us how her principal reacted when she conveyed students’ complaints: “Show me one college in Mumbai that doesn’t do moral policing to ensure security. We at least let you wear whatever you want as long as we find it decent.” The entire problem can be summarised in the phrase ‘as long as we find it decent’.

Mumbai isn’t so liberal after all

Mumbai is widely considered a cosmopolitan, ‘liberal’ place but Spriha Shukla, MPhil scholar, TISS, strongly disagrees, “People in Mumbai romanticise the city to the hilt, such that they select to blind themselves to its fallacies.” Some students think such disciplining is a small price to pay for the other freedoms Mumbai provides, but if each one of us, every day, is paying little by little in personal freedoms then the city’s economic opulence isn’t enough compensation.

“Mumbai’s extreme economic drive has been rewarding, but at the same time, it is hurting us somewhere. Education has become disturbingly materialised, such that students have prioritised their economic ambitions over asserting their rights,” says Sanchayan Bhattacharjee, Associate Fellow, ORF Mumbai.

Moral policing per se is a citywide problem and not unique to college campuses. Maitrayee Misra, a postgraduate student at TISS said, “At state central library in Asiatic society building, my friend was recently told to specifically go in the ladies section and read since she and her male colleague were reading a magazine together.” The city’s indifference to injustice has seeped into the campuses.

A student from Birla College, Kalyan, recalled an incident from their fresher’s party, “Our vice principal upon seeing a girl wearing a skirt, warned us that he would do away with the yearly event for good if we didn’t mend our ways.” When arbitrary rules can be established without being challenged, it represents the lack of agency students have in their own institutions. Student councils are a facade since the representatives are ‘elected by nomination.’

In the past two decades, the administrators at Mumbai University have depoliticised the city’s campuses, compelling students to believe that silence is golden and enduring injustice is the key to success. On November 1, 2018, the varsity lifted the blanket ban on student elections, creating avenues to exercise dissent in the campus. “Creating a politically and socially aware generation is vital for the republic’s survival. Reinstating student polls is varsity waking up to it,” reckons Vibhuti Patel, senior academician and professor at School of Development Studies, TISS.

Given the sheer number of anonymous students in the article, we are in a dire need to hold elections to give a voice to Mumbai’s students. But, if the status-quo continues – Mumbai! You need to pace yourself up and seriously think about the kind of culture you are passing to the future generation!

Shweta Kushe and Shristi Achar are undergraduate students majoring in economics at the University of Mumbai.