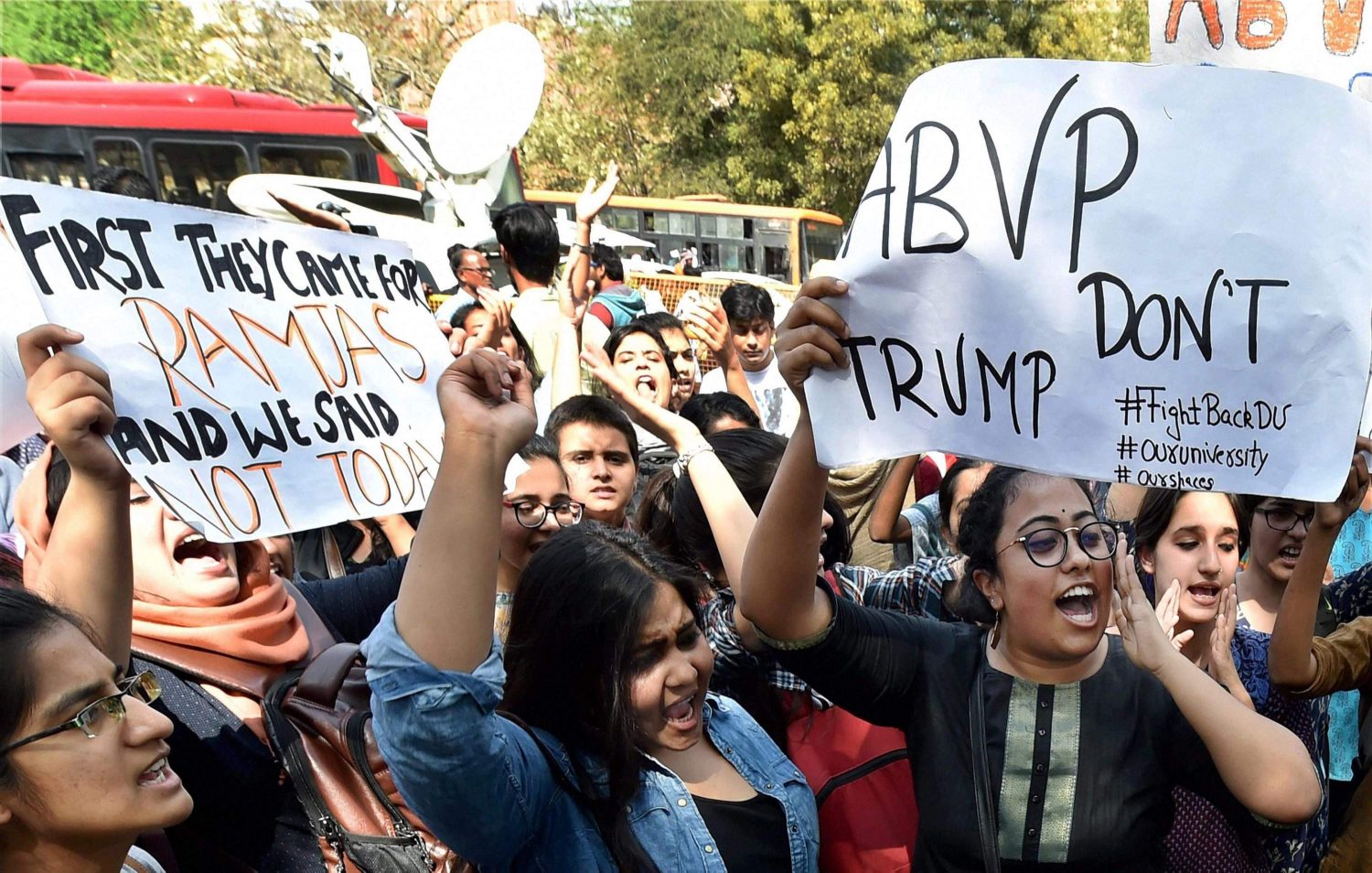 It’s been over a year since the Akhil Bharatiya Vidyarthi Parishad (ABVP) used violence to restrict free speech in Delhi University (DU’s) Ramjas College, and we still hear of college administrations cancelling or censoring events. But what do DU students want?

It may seem hyperbolic to think that inviting a certain speaker to your college would instigate violent pushback, but it did happen. The events at Ramjas College last year forced everyone to come to grips with how important it is to have the freedom to express our opinions – whether others agree with them or not. The protests and discussions, however, faded away and left us with inconclusive answers about what college students really want, and how they feel about current socio-political circumstances.

We saw these unanswered questions as a void that can be filled with data. So, in our attempt to understand how much students value freedom of expression, we also learnt that opinions aren’t as straightforward as one might expect.

Studies of this kind have been conducted before, but not in DU, which is what motivated us to take up this exercise. The Economist conducted a study where they found that young people across 18 countries are intolerant of many restrictions but not so progressive when they think of free speech. Another article published by The Atlantic lists a number of US colleges that explicitly restrict free speech on their campuses. We conducted a representative sample survey, with the help of student volunteers, in three major DU colleges: Hansraj College, the Shri Ram College of Commerce and the Delhi School of Economics.

We asked students, ‘Should university campuses allow for all forms of expression?’ Primarily, the answer was ‘yes’, with nearly 55% of the students in favour, 15% expressing neutrality on the subject and 30% disagreeing with the premise.

The second question saw a resounding 81% of students in favour of organising more events and seminars on campus. These results very clearly contradict seemingly popular claims that students don’t want to hear certain forms of expression on campus. The larger learning, however, is that student leaders should ask students what kind of campus environment they want, rather than just speaking as their representatives.

After establishing that students want their campuses to have a multiplicity of opinions and more seminars, we realised it was important to also get a sense of how students might react to some of these different opinions. The first graph (Figure 1) illustrates the willingness of students to accept certain types of opinions. Opinions that were deemed offensive to minorities and ones that might be sexist were found to be the two major types of opinions that ought to be restricted (40.6% and 42.4% respectively). However, the critical thing to note is that only 28.3% of the students wanted restriction of opinions that could be conceived as ‘anti-national’ which strongly contradicts the frequent rhetoric used by right-leaning bodies such as the ABVP that students do not want to see such speakers.

What types of speakers do students want to see on their campuses? An overwhelming majority, nearly 82%, wanted to hear more speakers who advocate for greater sexual freedom. Approximately 63% of the students expressed a desire to welcome eminent scholars from Pakistan to their campus – showcasing a willingness to engage that contrasts with the Indian government’s recent stance with respect to Pakistani actors and cricketers.

Finally, it is important to note that speakers whose images overlap with questions of religion and nationalism tend to polarize opinions the most. This can be seen from the fact that speakers such as members of the RSS, Umar Khalid, Hindu nationalists and advocates of freedom of Kashmir all came in within the range of approximately 40-50%.

While we were motivated by similar surveys conducted in universities abroad, we do acknowledge that this survey in no way fulfils the need for data on this subject. Instead, we hope that these findings will help shift the existing discourse towards evidence. University campuses aren’t just spaces for academics, historically they have also been forums for debates on some of the most pertinent issues in society. DU’s students have made their opinions clear, and we hope that college administrations and student political organisations will listen.

Acknowledgements: We would like to thank Professor Reetika Khera, and Professor Jean Dreze for their extensive guidance and support. Thanks to all the student volunteers who conducted the surveys on ground without whom this exercise would not be possible.